As many of us already know AC Milan have a rich history of European success. At one point up until only a few years ago Milan was the most decorated club in the world. They still hold the second most Champions League trophies, second to Real Madrid.

Following the 2012/2013 season the Rossoneri took a four year break from European football, as the team was going towards a downward cycle. But at the beginning of the 2016/17 season, Vincenzo Montella took over as manager. He helped lead the team to a 6th place finish in Serie A this season, which helped them qualify for the knock out round of the Europa League.

With a huge investment from the new management, Rossoneri fans from all over world are chuffed about the chance to win another European trophy. With all the success in the past I wanted to highlight the 5 best Champions League games that AC Milan has played in since the year 2000 in my opinion.

A lot of you may be thinking, Why Ajax v Milan, this game was a group stage game, but the importance of this game is why it made the list. If Milan lost the game they wouldn’t have made it through to the knock out stage of the tournament. The game was not a boring one regardless of what the score line may suggest.

Milan went down a man at the 22th minute when Riccardo Montolivo received a straight red card for a late tackle on Poulsen. For the following 70 minutes AC Milan played some great defensive football. They held off 23 attempts on, with 11 of them being on target. Ajax held the ball for 64% of the time while completing 578 passes.The Rossoneri managed to hold the score at 0-0 earning the one point needed to advance. In a period of down football for the club, and a great confidence boost for a team that was not doing so well at the moment.

In the 2006/2007 UCL tournament, the Rossoneri were out for revenge, two years prior they had lost the final to Liverpool to in an embarrassing fashion. It was the Semi finals of he tournament, this time around they where facing the top English talent in Manchester United who had a team full of young talent including Wayne Rooney and Cristiano Ronaldo. The Rossoneri had no fear coming into this semi final as they had comfortably beat Bayern Munich 4-2 on Aggregate.

Going into the first leg of the semi final Manchester had home field advantage. AC Milan Started strong with a brace from Kaka scoring in the 22’ and 37’, they had a 2-1 lead going into half-time. Then came the down turn. Wayne Rooney’s second half brace sunk AC Milan in the first leg 3-2. This time it was Milan’s turn to host the game. Even though they lost the first game they still had 2 away goals and hadn’t dropped any home games since the group stage against Lille.

There was no chance for Manchester to win against the Rossoneri. They came out on fire, out shooting the English giants 13-8, converting 3 of those to goals. The Goal scorers were Kaka in the 11’, seedorf in the 30’ and Gilardino in the 78’ to put the icing on the cake. The Rossoneri were off to the 2007 UCL Final in Athens.

The Derby Della Madonnina, what every AC Milan fan loves, going up against their fierce rival Inter Milan. The First game took place on May 7th, and was a hard fought 0-0 game. Since AC Milan were home in the first leg they would be the away team in the return leg (both games played at the San Siro). All the Rossoneri need to go through is a 1-1 draw, and that is exactly what they got thanks to Shevchenko’s 45’ minute stoppage time goal. 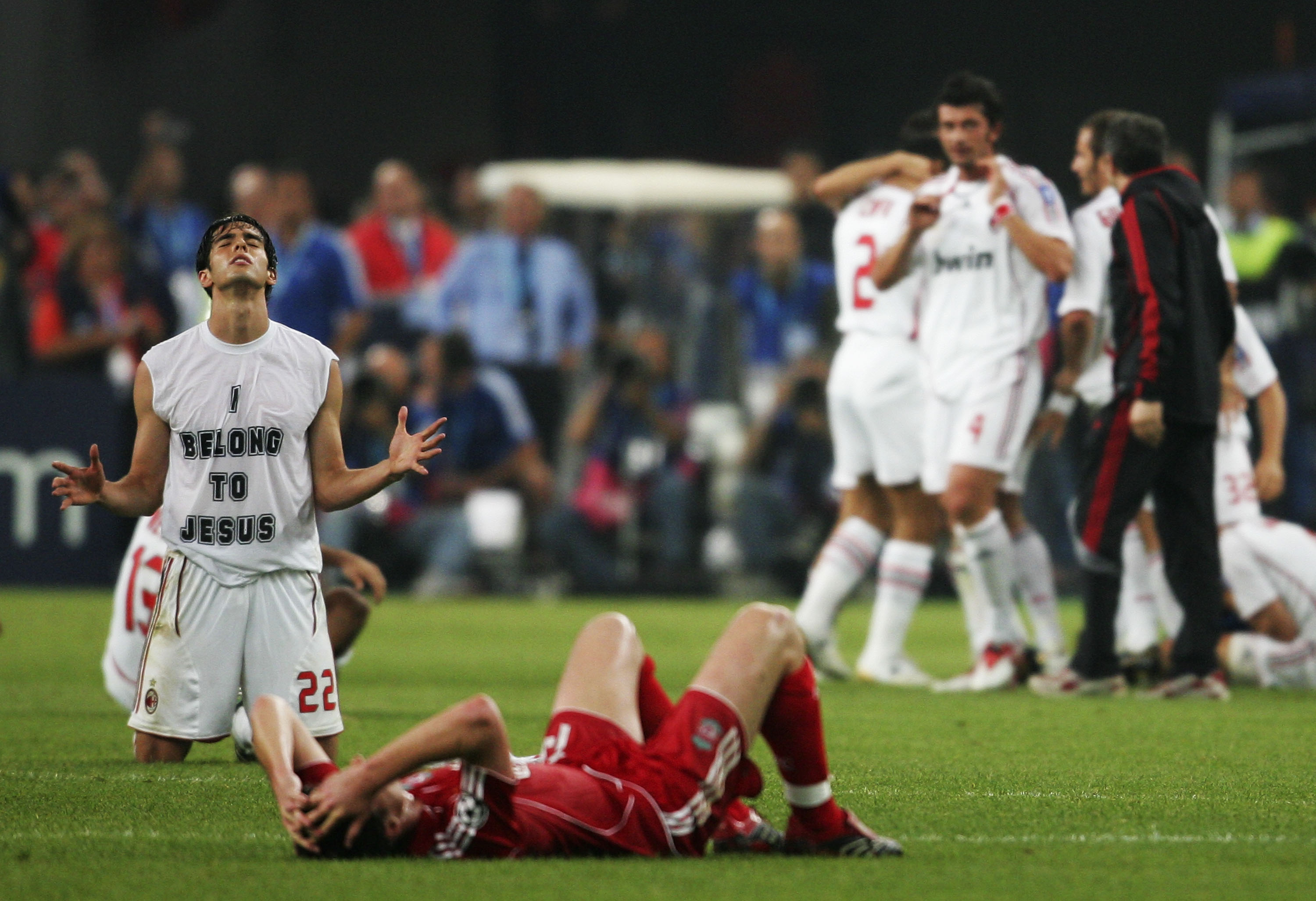 To me this is one of the greatest games that the Rossoneri have ever played in, and that is for a couple of different reason. This was Milan’s chance at redemption, and it was coming in Greece against a rival in Liverpool. This time Milan were not going to go home without the trophy that has enriched so many Rossoneri fans throughout their lifetime.

Despite being out shot 5 to 12, Milan would end up winning the game 2-1 on Filippo Inzaghi’s brace. Despite a 89’ minute goal from Dirk Kuyt, it wasn’t enough to spoil the party for AC Milan topped with their seventh UCL Championship.

I recently met Filippo Inzaghi while he was on tour with Venezia in Detroit. While people were asking him questions about his managing style, I had to know, What was it like to score a brace to win the Champions League Final. His response was nothing less than world class, “being able to score the 2 goals to bring the UCL trophy to Milan is like nothing I can explain, I didn’t sleep for 10 days because all I did was think about those goals.” 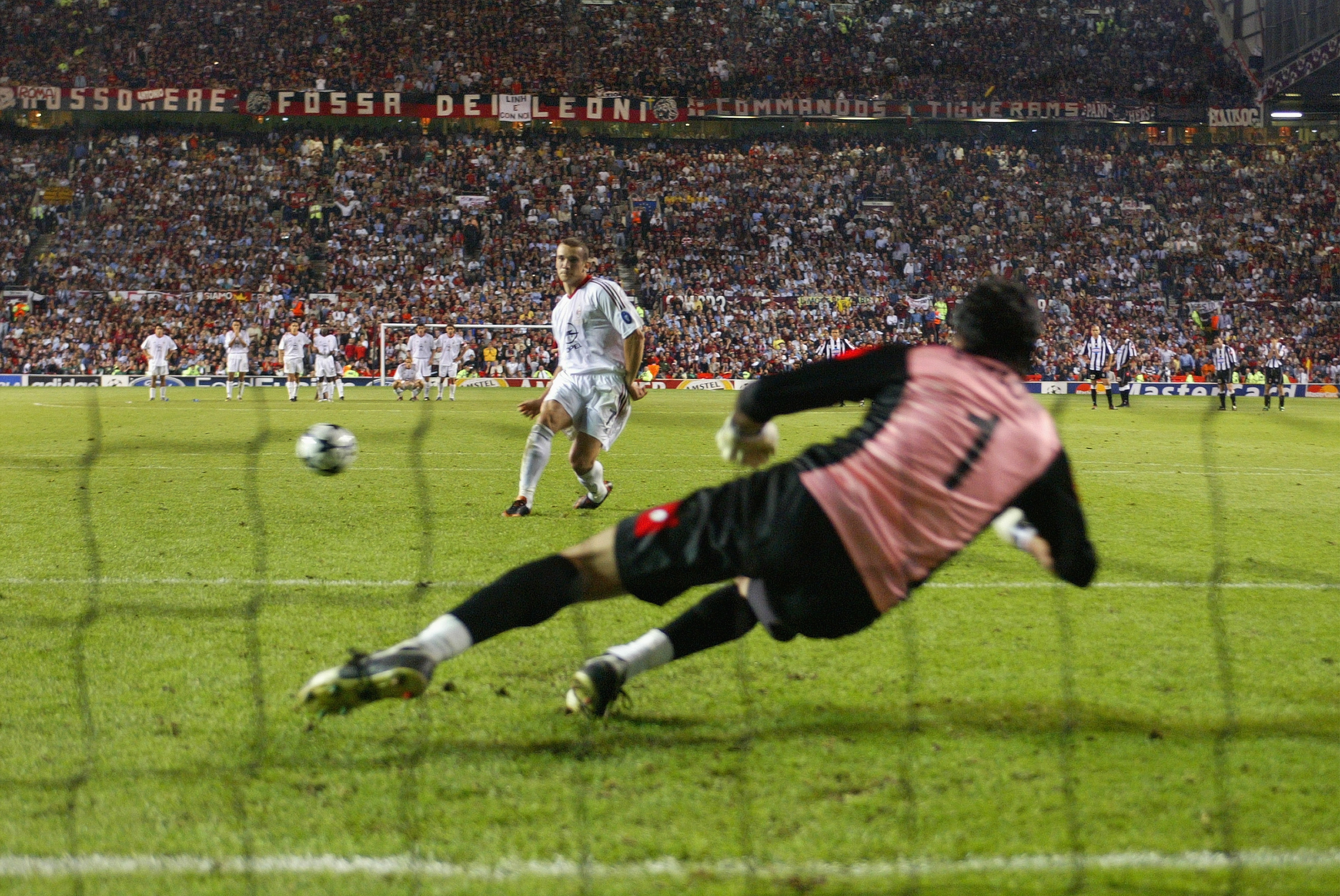 What could be better then beating Inter Milan in the Semi Finals? Beating Juventus in the final, and that is why I chose this game as the best UCL game post year 2000. The game took place in Manchester on a clear night, a great night for a championship game between two European heavyweights.

The game was a defensive masterclass and ended in a 0-0 draw while heading into penalty kicks. Milan won on Penalty kicks 3-2 with Serginho, Nesta, and Shevchenko scoring for Milan, and Birindelli, and Del Piero scoring for Juventus.

The look on Sheva’s face before delivering the death blow on Buffon is one that lives on in infamy inside all football fans.