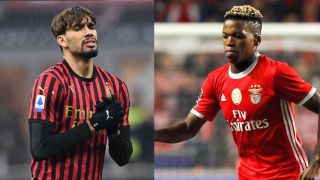 AC Milan have a concrete interest in Benfica midfielder Florentino Luis and are ready to offer a player-plus-cash deal, according to a report.

Milan have long been linked with a move for Florentino as we revealed in January that contacts were held with the Portuguese side, with Milan wanting to sign him on the basis of an 18-month loan with the right to buy set at €40m – an amount that was deemed insufficient.

Calciomercato.com recently claimed that the Rossoneri are ready to have another crack at trying to sign the 20-year-old, who has made just 15 appearances for Benfica this season across all competitions.

According to the latest from Portuguese outlet A Bola – as cited by MilanNews – Milan are currently ‘pressing’ to get Florentino.

Not only that, but the paper claims that Milan are ready to make an offer to the Lisbon-based side involving midfield outcast Lucas Paquetà and a cash sum to sign the 21-year-old and partner him with Ismael Bennacer.