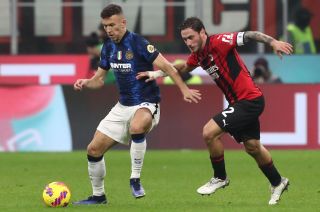 A game of firsts and a landmark for Brahim: All the key stats from Milan’s draw against Inter

AC Milan and Inter were forced to share the spoils at San Siro as the Rossoneri kept their seven-point lead over their city rivals intact.

Inter were the more dominant side in the first half and took the lead from the penalty spot as Hakan Calhanoglu netted against his former side, but Stefan de Vrij inadvertently diverted the ball into the back of his own net the level the game and Lautaro Martinez saw a second penalty saved by Ciprian Tatarusanu, with the game ending 1-1.

Below are the best stats from the game at the San Siro, as relayed by the official website…

➤ Milan have picked up 32 points from their opening twelve games of a Serie A season for the first time since the start of the three-points-per-win era (1994-95).

➤ Inter and Milan have played out a draw for the first time since April 2018 (a 0-0 stalemate back then).

➤ For the first time since Opta started collecting such data (2005-06), Milan conceded more than one penalty in the first half of a Serie A match.

➤ Both Inter and Milan found the net in the first 20 minutes of a Milan Derby for the first time since March 1999.

➤ Ciprian Tătărușanu is the first Rossoneri goalkeeper to save a penalty in the Milan Derby in Serie A since Opta started gathering such data (2005-06).

➤ Brahim Díaz made his 50th Milan appearance in all competitions.