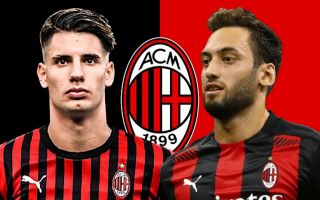 A new face at No.10: The financial and environmental implications of replacing Calhanoglu with Szoboszlai

There has been a lot of speculation in the media over the past week or so suggesting that AC Milan could undergo a change in the playmaker position.

A number of different sources – including Tuttosport, Calciomercato.com, MilanNews and il Corriere dello Sport – are now reporting that Milan are considering a move for Red Bull Salzburg star Dominik Szoboszlai as a potential replacement for Hakan Calhanoglu.

In fact, the Calciomercato report was the one that went into some specifics about the economic demands of the Turkey international as the Rossoneri look to extend his contract – which expires in June 2021 – to avoid the risk of losing him for free.

They claim offer that Milan have tabled to Calhanoglu and his entourage is €3.5m net per season including bonuses, and at the moment there is no suggestion that the Rossoneri are willing to raise that after Ivan Gazidis evaluated the budget with Elliott Management.

The contacts between the parties are ongoing but there is tension. Paolo Maldini and Gordon Stipic – the player’s agent – are still ongoing, while sources close to the player claim that the request was not €7m-a-year but is over €5m.

With that being said, we have crunched some of the numbers to examine the financial implications of satisfying Calhanoglu’s demands vs. letting him go and replacing him with Szoboszlai.

Keeping Calhanoglu: We are working under the assumption that Milan would be able to find a compromise to some extent, but that given the interest from Juventus, Atletico Madrid and Manchester United, they would still have to pay him a top salary.

It is worth explaining too at this point that a new tax relief scheme has come into effect in Italy that means if a person has lived and worked in the country for two years or more, they have their taxes halved, which reduces the amount significantly for a club who have to double a player’s salary to cover the tax.

However, they only qualify for this if they have been out of the country for more than two years (their tax residence at least) and then register a tax residence in Italy after 1 January 2020. In theory, that means Calhanoglu could move his tax address and then move it back in 2022 to take advantage.

Those are the two scenarios, and any other numbers are easily calculable. It is simply the net yearly salary times by the number of years, and then times that amount by 1.7 to work out the pre-tax amount.

Signing Szoboszlai: As a primer, it is worth noting that Milan would not register a loss on the balance sheet if Calhanoglu left on a free transfer, as the full amount of the fee paid to Bayer Leverkusen will have been amortised. A sale in January however would be likely to yield a capital gain, as long as it were over a few million euros.

Szoboszlai we know has a €25m release clause which makes his transfer fee easy to calculate. There is some debate as to whether that amount is payable in three instalments or not, but either way with amortisation the fee would be spread on the accounts.

Therefore, with the assumption that Milan could agree personal terms at the reasonable sum of €2.5 net per year (the amount Calhanoglu is currently on), the following amounts are produced…

Essentially, if Milan were to snub the idea of committing to a new five-year deal and subsequently allowed Calhanoglu to walk away, they could use the big chunk of money they would save to cover the vast majority – perhaps even all – of the total investment that would be needed to sign his replacement.

As a general overview, Calhanoglu has played 140 games across all competitions for Milan since joining from the Bundesliga in 2017, amassing 27 goals and 40 assists. That equates to a goal contribution every 2.08 games.

Szobozlai has racked up 74 appearances for Red Bull Salzburg meanwhile, with 22 goals and 33 assists in that time, equating to a goal contribution every 1.35 games.

Of course, it is worth noting that the standard of Serie A is generally regarded as much higher than that of the Austrian Bundesliga, but the 20-year-old is showing he can do it in the Champions League with four goals in five games this season when factoring in the qualifying round.

Both players are considered to be versatile too. It must be remembered that Calhanoglu found his first good bit of form as a left sided player in a 4-3-3 but has moved more to the central attacking midfield role, while those are the two positions Szoboszlai can take up too.

The most unquantifiable factor is the period of adjustment that would be needed. In the 12 Serie A games post-lockdown until the end of last season in Serie A, Calhanoglu amassed six goals and eight assists and showed exactly what he is capable of with a run of games in his favoured position.

Szoboszlai would take some time to get up to speed with Italian football, with his new team-mates including the likes of Ante Rebic and Zlatan Ibrahimovic, and with a role as an out-and-out playmaker.

Milan’s project and the vision of Elliott Management seems to be one based around bringing the wage bill down and investing in young talents that will form the core of the future, with the right exceptions to add a mixture of experience and a winning mentality.

There are two ways to look at Calhanoglu’s possible renewal. The first is that he is arguably the most disposable of the players with expiring contracts in the next couple of years (more so than Donnarumma, Ibrahimovic, Kessie and Kjaer) given the fact he has only really produced six months of consistent good form, while the second is that letting a player of his quality go for free just as he is hitting his stride would be silly.

There are also two ways to look at his potential pay rise. One is that Milan would be silly to commit to a contract possibly worth €40m+ for a player who has been largely inconsistent, the other is that Hakan is well within his rights to demand and to earn a top salary given what the club are paying other key performers.

Paolo Maldini, Ricky Massara and the rest of the management must weigh up the risks of upsetting the jigsaw puzzle Pioli is building versus the temptation of making an investment very much in line with Elliott’s grand plan.

Thankfully, it isn’t us who are paid to make those decisions. If you were in charge though, what course of action would you take? Comment below.