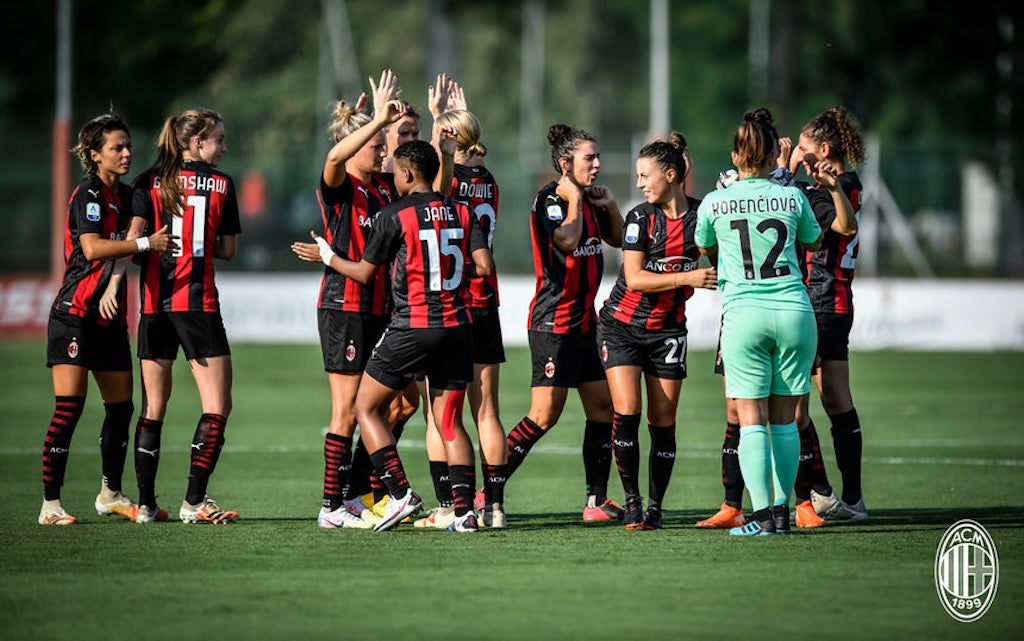 The AC Milan Women will play their second game of the Serie A Femminile season tomorrow against San Marino Academy.

The match will take place at 17:45 CET (09:45 PST or 12:45 EST). The game will be played at the Campo Sportivo di Acquaviva in San Marino, as Milan will be the guests of the newly promoted side, and it will be streamed on the club’s official app.

Due to the nearly chaotic way that scheduling (and nearly everything else) works in Serie A Femminile, scheduling changes happen frequently. Oftentimes, we don’t find out that the kickoff times for the matches have changed until a few days before the match actually starts.

The improvised nature of match scheduling means that we won’t know what formation Milan will field, or what their line-up will be tomorrow.

The only thing we know for sure is that midfielder Miriam Longo will not play after the injury she sustained during the last match. It is expected that Milan will field the same line-up they had during the last match, minus Longo. They’ll continue with the Giacinti-Dowie partnership up front, and perhaps field Sara Tamborini as a trequartista.

We also won’t know if the match will be broadcast on the Milan app, or if it will be only be shown on TimVision in Italy.

This aside, look for the Rossonere to build on the momentum of their last win and to do one better.

Milan have admitted that their performance during their last match was less than stellar. The team was slow to move the ball around during the game and had trouble finishing their chances.

The team registered a total of twenty shots, yet only three were on target, and only one was converted.

It didn’t help that, in the words of coach Maurizio Ganz, everybody seemed to be playing for themselves. The team will need to learn to be more selfless and to pass the ball to each other so that they don’t repeat the display they put on last Sunday.

This is one of the growing pains of a team that has brought has yet to fully gel together, as many of their players are new to Italy and Italian football. The players are also new to each other, and will need time to develop the cohesive chemistry they’ll need to play as an effective unit.

The game against San Marino will be one of the ways they can grow together. San Marino are Serie A debutantes, as they were promoted after finishing second in Serie B last season. And like a lot of newcomers, they’ve had to endure a trial by fire.

Their 10-0 defeat against Empoli was a pretty brutal way to be inducted into the top flight. Milan will not make life any easier for them, but before the Rossonere fans get too optimistic about a glut of goals, recall that Milan had trouble scoring against teams like Orobica last season.

If the Rossonere want to prove that they’re a better team than they were then, then they’ll have to do so by scoring more than one goal per game.

Milan is well aware of this, and we may see see a revitalised and more clinical side against San Marino tomorrow.