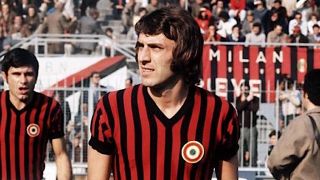 AC Milan fans around the world are in mourning as the club lost one of its true greats with the passing of Pierino Prati.

The forward – who had the innate ability to operate anywhere along the front-line – died earlier in the week at the age of 73, but his memory will live on forever. Legendary Franco Baresi said it simply and perfectly “A champion on and off the field, an honour to have known you. Goodbye Piero RIP.”

The man from Cinisello Balsamo came through the Salernitana youth team and helped the Campanians to promotion from Serie C to Serie B in 1966. He scored 10 goals in just 19 appearances in his one season with the club and such was his talent, he was snapped up by the Rossoneri.

He was just 19 at the time and in order to gain experience he was loaned out to Savona, and similarly to his time with Salernitana his goal-scoring ratio was highly impressive. In 29 matches with the Ligurian side, he racked up 15 strikes in Serie B as he already began displaying that killer instinct in his game that would serve him well in the following seasons.

After one campaign each in both Serie C and Serie B, but now it was time for Prati to take the step up and play a full season in Serie A.

At the start of the 1967-1968 season, il Diavolo were going through a sort of mini-revolution. Nereo Rocco had been re-appointed the manager after his stint with Torino, Gianni Rivera was the captain and players such as Swedish winger Kurt Hamrin, goalkeeper Fabio Cuducini and defender Saul Malatrasi were acquired to join Prati.

This was a well balanced squad with both youth and experience, and the 20-year old took some time to establish himself in the first team – but when he eventually did, he pummelled opposing defences. His first goal came in the seventh round of Serie A against Cagliari in a 2-2 draw. It was just the start of what would be an incredible campaign for the forward.

He amassed 22 goals in just 38 games of that first year with Milan, a phenomenal return for a debut season. Included was a spell of 15 goals in 23 league games and three in seven in the Coppa Italia at the peak of Catenaccio.

However, don’t think that his goal-scoring prowess was just confined to Italy: on the continent, Milan were involved in the Cup Winners’ Cup for the first time ever and “Prati the Pest” put the ball in the back of the net four times in eight games.

At the end of his first year, Milan won the Scudetto, the Cup Winners Cup and finished just two points off Torino for the Coppa Italia. Prati was the man for the big occasions, and managed to score againsr Napoli, Fiorentina, Juventus and Bayern Munich, all in a variety of ways as well, showcasing all his attributes.

By that time he already made his international debut for the Azzurri and participated in that summer’s European Championships, as Italy claimed the crown for the first time. Prati started the first final which ended in a 1-1 after 90 minutes, but was replaced by Gigi Riva for the replay as Italy beat Yugoslavia 2-0.

It got even better for Prati and Milan in Europe in the next year. Playing in the European Cup, the Rossoneri had a tough time negotiating their way through the most prestigious tournament in Europe, but they had Prati and the forward was at his supreme best.

Milan lost their first leg of the first round to Malmo, but back at the San Siro Prati scored a double to lead the fightback. They could only manage a goalless draw with Celtic in the second round at home, but sneaked a hard fought 1-0 victory at Celtic Park with Prati scoring the only goal.

He helped contribute to Sormani and Hamrin’s goals in the semi-finals versus defending champions Manchester United, and then came the final versus Dutch champions Ajax and their “Total Football”.

The Estadio Santiago Bernabeu has seen many legendary performances in its existence and Prati put in such a display on the 28th May1969. Two headers either side of a ferocious right-footed finish from 25-yards out meant a hat-trick for the striker, as Milan ran out 4-1 victors and claimed the European Cup for a second time.

Prati is the last player to score a hat-trick in the European Cup final and considering how many absolute legends have taken part in Europe’s showpiece event, it says much about the greatness of the man.

Two of those goals were set up by Rivera and by that time, it was clear that the pair were developing an almost telepathic understanding with each other.

The club would later add the Intercontinental Cup in the infamous violent final against Estudiantes with Prati himself being severely injured in the clash in Buenos Aires. By the age of 22, Prati was an Italian, European and World champion with the Rossoneri.

Prati’s versatility to adapt to the game – both at the start and in-game when the situation arose for him to do so – was arguably his best attribute.

He had the pace and dribbling ability to play out wide. He had the aerial ability to take advantage of crosses. He could shoot with an accuracy that meant he rarely ever missed the goal, generally forcing the opposition goalkeeper to at least have to make a save.

He had a keen sense of finding an open space in the final third and could either make diagonal runs inside from the wide position or hug the touchline and make the pitch big, which allowed his teammates more space to penetrate.

Having had such success early on in his AC Milan career, it was probably inevitable that there would be a down period. Prati never reached those heights again with the club, but still managed to have solid displays with the club.

He was the Diavolo’s highest scorer in the Coppa Italia campaign of 1971-1972 with four goals as the club won the trophy for the second time. In that run, he yet again showed his penchant for scoring in the big games, as he grabbed the lone goal against rivals Juve in the second group stage match that helped them qualify for the final. That was followed up with a second triumph in the Cup Winners’ Cup as well, with the man who regularly wore the number 11 shirt, scoring twice in four matches.

It would be his last trophy and consequentially Prati’s last season with Milan, as he went to Roma that summer before finishing his career with a spell at Fiorentina as well as a second stint at Savona.

Prati accumulated 102 goals in 207 games for Rossoneri and won the Scudetto, the European Cup, two each of the Coppa Italia and Cup Winners Cup. At international level, he scored at a goal every two games with seven in 14 appearances with the Euro 68 title part of his trophy collection.

However, it was not just his goals or the titles he won while with Milan that has held him in such high regard among Milanisti and neutrals alike. It was his willingness to sacrifice himself for the club, to contribute wherever and however that was required & his true team spirit that he displayed that has him in fans of the club hearts.

Piero Prati: Gone, but not forgotten. May he Rest In Peace.

Sky: Sprained left ankle for Calhanoglu confirmed – he will miss the next three games
20 October 2020, 18:36