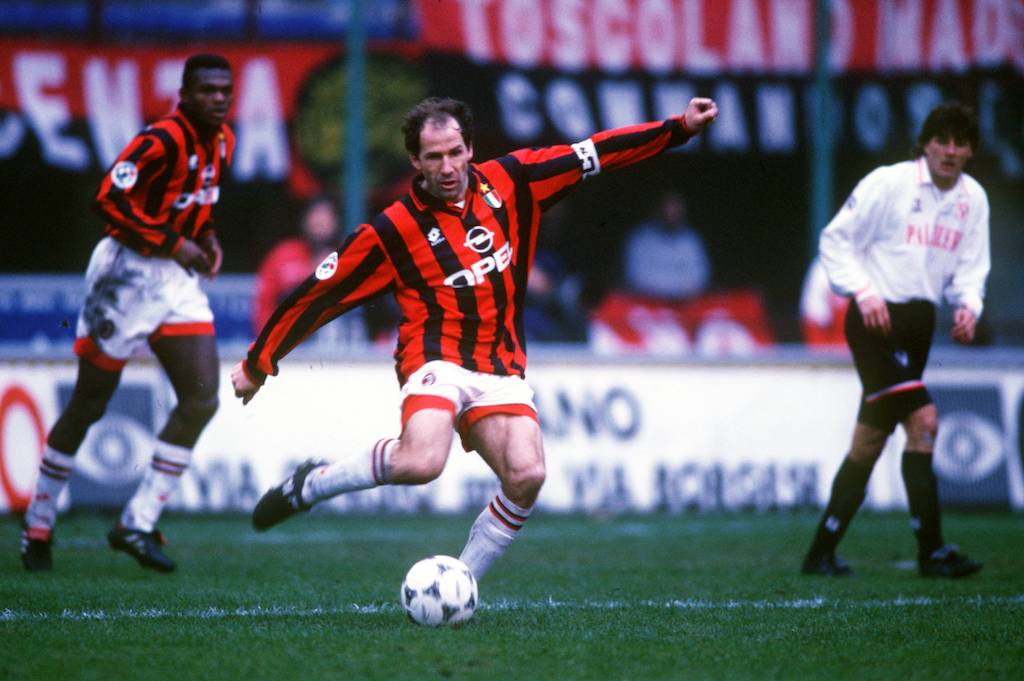 A tribute to Franco Baresi: The true embodiment of a Rossoneri icon

On the 8th of May, Franco Baresi reached the age of 60 and for many it is considered a significant number to reach in one’s lifetime.

When someone has achieved as much as he has in his career, it’s easy to forget what he had to go through to reach such heights, but not “Kaiser Franz” as he would become nicknamed.

In recent interviews, he mentioned appreciating the responsibility of wearing the Rossoneri shirt, the sacrifices he had to make in his life and giving respect to all and sundry he came in contact with during his time with the club. He may have retired all of 23 years ago, but those values has held him in good stead since and is something we can all learn from.

Baresi’s humble nature probably stems from setbacks he would have had to endure very early on in his life.

At the age of 14, he was rejected by Inter after having trials with the club. He was considered too small by the coaches, and he promptly went across to the red and black half of the city for a trial for the Rossoneri. Even there, he was not accepted initially, as he needed a couple of attempts with Milan to convince them to take a chance on him. Even Baresi really had to do it the hard way.

While at Milan, he was playing football and taking classes as well – never an easy task but he was making progress. However, tragedy would strike his family, as he and his four siblings lost their father when Franco was just 17. They had lost their mother four years earlier, so as he would later state they had to “roll up our sleeves.”

At that same age, he made his debut for AC Milan during the 1977-78 season and described the two days leading up to his debut as “filled with nerves.” However, his composed, assured and steady displays in the last couple months of that campaign, meant he was a starter come the following year. He would win his first trophy that year: the much vaunted 10th Scudetto under the tutelage of Nils Liedholm and captain Gianni Rivera, two icons in their own right with the Rossoneri.

However, that would be Baresi and Milan’s last major title for a long time. The very next season, the club were relegated due to their involvement in the Totonero scandal. Baresi was a member of Italy’s Euro 1980 squad, but choose to stay with the club.

He helped make an immediate return to Serie A, but they were relegated again in 1982, but again, Baresi remained. He did win the Mitropa Cup that year, but by that time, he was establishing himself as a top class player in Calcio.

He had a number of offers to leave the club, notably from arch-rivals Juventus, but he even recently admitted that he “never considered leaving Milan”. That loyalty earned him the position of club captain, at the age of just 22. The added responsibility might have seen lesser individuals buckle under the pressure, but Baresi is no ordinary player or person and he rose to the occasion and led from the front.

Back in Serie A, Milan were steady and stable but nowhere near to contending for the big prizes, but that was about to change as the decade of the 80’s reached its latter years. Silvio Berlusconi took over the club in 1986 and started a revolution that would shock the world of football and lead to one of the most dominant teams in the sport’s history.

Needless to say, Baresi was front and centre of the new project and after all the years of suffering, he and the Rossoneri faithful were about to experience a glorious period.

Under the guidance of Arrigo Sacchi’s 4-4-2 system based on pressing, possession and free-flowing football, Baresi was the man to command the other 10 players on the pitch. Dutch duo Ruud Gullit and Marco Van Basten were acquired and with a midfield that offered skill, strength and tactical nous, Baresi controlled a backline which also included Alessandro Costacurta, Paolo Maldini and Mauro Tassotti, with Giovanni Galli in goal.

In just the first year under Sacchi the club won the Scudetto, however it was not just that they won but the way in which the title was achieved. Playing an attractive brand of football had rarely been seen in Italy before, Baresi stopped attacks but also did his fair share of starting them for Milan, who leapfrogged Napoli to claim the title. The man himself always mentions that night at the San Siro when the players went back to the stadium after clinching the title as “a night I’ll never forget.”

There would be many more unforgettable nights for Baresi and Milan in the coming years.  Their next goal was to conquer the continent and they did just that in their return to the European Cup. A commanding 4-0 win over Steaua Bucharest in Barcelona was followed by a 1-0 victory over Benfica in Vienna a year later.

Added on to that, Baresi lifted the European Super Cup and Intercontinental Cup twice each. In such a star studded side, Baresi’s influence was just as important as the others, proven by the fact that he finished second in the Ballon d’Or in 1989 behind Van Basten, and was awarded the Serie A Footballer of the Year in 1990.

Part of his attacking abilities was his proficiency from the penalty spot and he would score a total of 31 goals for the club. Arguably his best was a solo run versus Sambenedettese in the Coppa Italia in 1988, where he pressed the opposition attack, won back possession and marauded through the defense to score past the goalkeeper.

Had he had not found his calling as a defender, he could have been a very effective midfielder, with his vision, technique, ability to read the game, pace and passing abilities among many other attributes.

When he won his first Scudetto in 1979 Fabio Capello was part of that team, and Don Fabio was appointed to replace Sacchi as the manager in 1991, after the latter left to take over the Italian national team.

Under the former midfielder Milan played a slightly different tactical set up, with less emphasis on pressing, but with a bit more freedom for the players in terms of their positions on the pitch. Here again Baresi thrived, as his displayed his full repertoire of tactical abilities and reading of the game.

The Rossoneri would go on a 58 game unbeaten streak to become known as “The Invincibles,” and they would win the Serie A crown three years on the trot and they established their dominance domestically in what was at the time, far and away the strongest league in the world. New players arrived at the club to replace the older ones and Baresi made it a point to let them know of their duty to the club that they were representing. 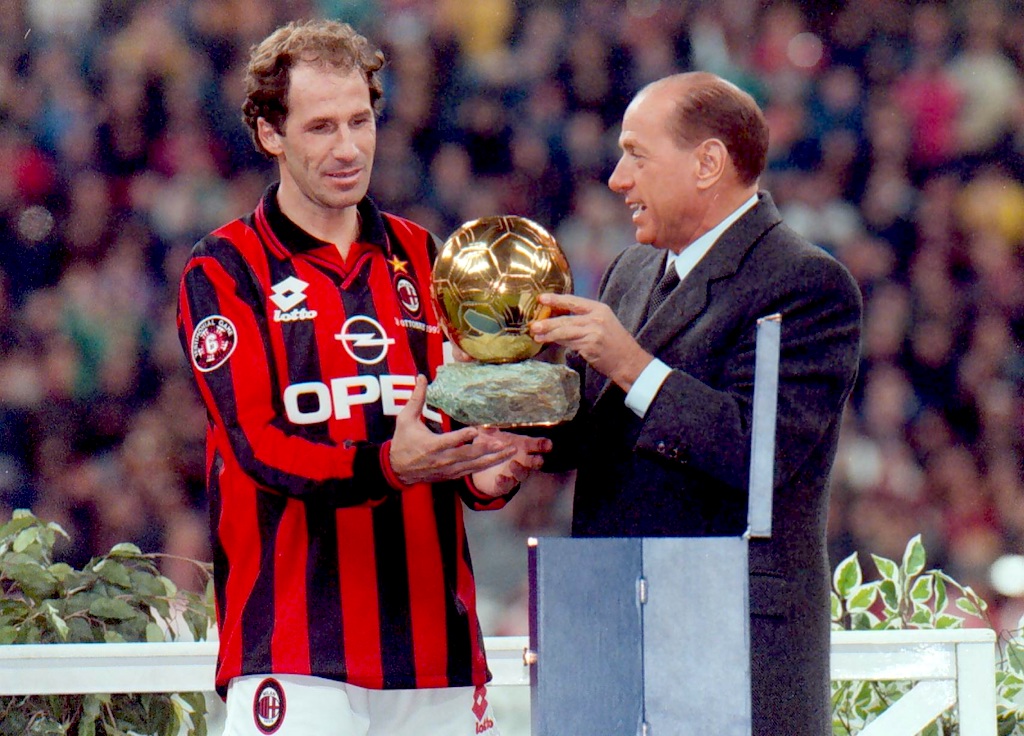 An unfortunate loss in the newly revamped UEFA Champions League to Marseille in 1993, meant a minor set-back for the club. The next year, they would put things right, as they triumphed versus Barcelona 4-0 in the final in Athens. Baresi however, was suspended for the final, but given the performance of Tassotti, Maldini, Galli and Panucci at the back, his influence and knowledge had indeed been past on.

He had one last crack at European glory, but a single goal loss to Ajax in the final in 1995, meant he won’t come close again to conquering the continent. Ever the spirited fighter, Baresi picked himself up and led his club to the final Scudetto of his illustrious carear in 1996.

He would retire from football the following year and he was bestowed an honour that very few have been given: his No.6 shirt that he wore with such pride, honour and sense of duty was retired by AC Milan.

When he took his lap of honour around the San Siro, there was hardly a dry eye in the stands, as the fans knew exactly what they were losing. A boy who became a man, who stuck with the club through the worst period in their history to eventually lead them back to the top of Italian, European and World football.

Such was his stature at the club, that he was voted the club’s Player of the Century in 1999. He ended his Milan career with 719 appearances and he won the European Cup three times, the Serie A on six occasions and many other trophies in a quite remarkable and glittering time with Milan.

At international level, he represented Italy 81 times and has the almost unique accolade of having a gold, silver and bronze medal at the World Cup, and was part of two European Championship teams.

Following retirement, an ill-fated role with Fulham in 2002 and coaching the Primavera of Milan are his only real forays, but nonetheless his legacy remains as strong as ever.