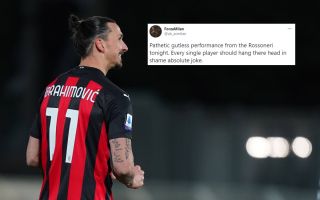 ‘Absolute joke’, ‘What a stinker’ – Fans react to Milan’s humiliating loss vs. Spezia

Milan failed to collect three points away at Spezia last night, outplayed by the newly-promoted side who deservedly won. It was a missed opportunity for Stefano Pioli’s men, now at risk of losing first place.

The Rossoneri will take on Inter in the Derby Della Madonnina next weekend and a win against Spezia would have put more pressure on the Nerazzurri. The latter will face Lazio this evening and could leapfrog Milan with a win.

Either way, the derby will now be absolutely crucial for both sides as the momentum a derby win gives you could be decisive in the Scudetto race. On Twitter, Milan fans were livid with the performance of the Rossoneri and voiced their opinions.

Pioli, and the rest of the Milan players for that matter, perhaps shouldn’t look on social media tomorrow. Or maybe they should, as it could fuel them to do better. Take a look at some of the reactions below.

Dalot. OMG what a stinker. But our midfield was completely empty. And you have to say it as you see it. When people run at theo he doesn’t defend at all. Is kalulu injured? If not he should have been brought on in RB. This was a shocker.

Pathetic gutless performance from the Rossoneri tonight. Every single player should hang there head in shame absolute joke.

Goal of the season candidate right there from Simone Bastoni.

As some have pointed out, yet another team that has pressed us high up and packed the midfield to stop our passing combinations. We could barely get out of our half today, long balls aside. Outthought and outfought. We need a Plan B against this kind of approach.

most boring game of the season, and our worst. I'm not worried about losing the the first place in the table for now, because I know Inter is too irregular and they are going to fall soon, but if we play the derby like today our hopes are dead.

I didnt understand why Poli would rely on players just back from Covid against a high energy team! They had no legs. Leao and theo doesn't work on left as both aren't good defensively. Dalot barely crossed halfway line which is completely against his strength.

READ MORE: Romagnoli reveals the hardest thing about Spezia loss and how his team-mates reacted after the game