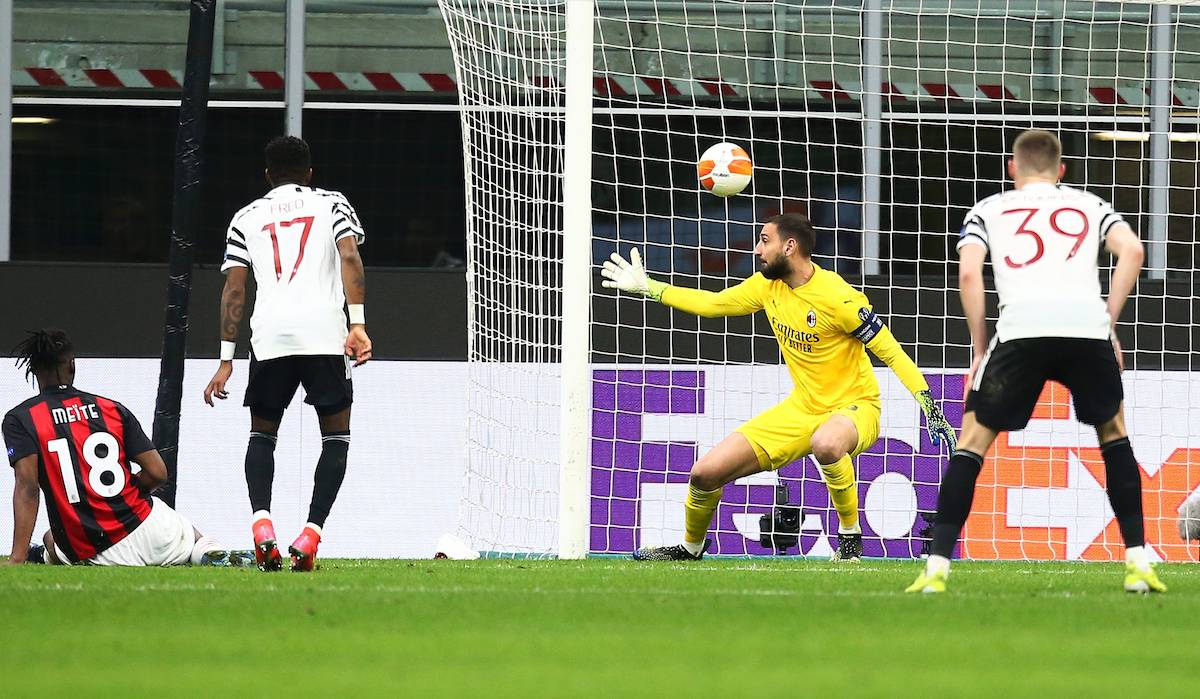 AC Milan were knocked out of the Europa League at the last 16 stage after being beaten 1-0 by Manchester United at San Siro.

Just like in the first leg there was very little to separate the two sides on the night, though this time Milan had no answer to United’s goal early in the second half.

It would be substitute Paul Pogba who was the hero on the night for the away side as he scored within three minutes of coming on, capitalising on the Rossoneri’s inability to clear their lines to beat Donnarumma at the near post into the roof of the net.

After the 1-1 draw in the first leg the result means that Ole Gunnar Solskjaer’s side went through 2-1 on aggregate, as Milan missed out on a first Europa Legue/UEFA Cup quarter-final since 2002.

Head coach Stefano Pioli was up against it from a selection point of view with no centre-forward fit enough to start. Leao and Rebic are injured and Ibrahimovic has just come back from a lengthy lay-off, so Castillejo got the nod as a ‘false nine’ style frontman.

The most polite way to describe the exchanges in the opening few minutes would be scrappy, as it became apparent Milan were relying on pressing in numbers behind the ball as United instead probed with the directness and incision that was missing at Old Trafford.

The first half-chance fell to the away side 11 minutes in as a nice one-two involving Shaw ended with the left-back cutting the ball to Bruno Fernandes who – from just beyond the edge of the box – fired well over with a first time effort.

The first shot on target meanwhile came from Milan, who began to grow into the game more with some nice fast passing combinations as they did in the first leg, but the Ivorian struck a low shot at Henderson in the away goal from 25 yards.

United had half-hearted appeals for penalty waved away on the 20-minute mark as James looked to use his pace to power down the left side, but Tomori got his studs on the ball as the Welshman went down thus rendering the appeals obsolete.

Theo Hernandez showed his incredible pace and power at the other end, taking the ball from just inside Milan’s half to just inside the opposition box before being tackled just as he was about to pull the trigger, with options either side.

From the throw-in that resulted Calhanoglu had a big chance to open the scoring as the second ball fell to him, yet somehow he scuffed his effort into the floor and it was easily caught. At the other end, Fred shot from the edge of the box and Donnarumma easily saved.

There was an excellent piece of defending from Lindelof to deny Kessie, who was about to stride onto a feed from Castillejo on the left side of the box after a counter attack before the Swede slid in perfectly.

Saelemaekers had the next chance as Milan produced some excellent one-touch football around United’s box, though Henderson was just about equal to the Belgian’s effort as he was in space around 20 yards out.

Milan had a huge chance to break the deadlock right on the stroke of half time as a 2v1 break ended with Saelemaekers clipping the ball to Krunic at the far post, who got there first but flicked his volley just wide of the far post.

United rolled the dice at half-time as Pogba came on – back from 10 games out with a thigh injury – with Rashford making way having not looked 100% fit.

Pogba made an instant impact too, giving United the lead within three minutes of the restart. It came after some bizarre pinball inside the box in which Milan failed to clear their lines on several occasions, the fatal one being as Fred charged down Meite down and Pogba settled himself before firing into the roof of the net from close range.

Saelemaekers tested Henderson at the other end as an excellent timed run put him in behind, though the England international was equal to the effort. At the other end, Donnarumma saved low from an angled Greenwood strike.

Pioli made a double substitution 20 minutes into the second half as Zlatan Ibrahimovic made his return to the field against his former club, coming on alongside Diogo Dalot as Kalulu and Castillejo made way.

The change seemed to give Milan some confidence back and they had half appeals for a penalty when Calhanoglu run down the right side ended with a cut-back to Kessie, whose effort at the near post was excellently blocked by Lindelof.

Milan continued to fashion chances with Calhanoglu drifting into wide areas down the sides of the box, and the latest opportunity saw Kessie head wide after a cross from the Turk. Moments later, Brahim Diaz came on for Krunic.

Ibrahimovic forced Henderson into his next save as the Swede was found in isolation at the far post against Shaw, winning the header but seeing it saved brilliantly by a strong hand.

United committed bodies forward to try and get the decisive second goal and Milan tried to exploit that on the counter, but McTominay made an excellent block with six minutes left on the clock to cut out a ball that was about to send Theo through on goal inside the box.

The closing exchanges featured Milan getting the ball into dangerous areas but not managing to find that cutting edge needed to cut through, as United secured their progress into the next round.