Just as they were just over a year ago, AC Milan were given a humbling by their Lombardy neighbours Atalanta, losing 3-0 at San Siro.

The Rossoneri simply never got going in what was a fixture where they were looking to keep their position at the top and do so in style, as the away side ended up running riot in a game that didn’t feel too dissimilar to the 5-0 at the Gewiss Arena in December 2019.

Cristian Romero opened the scoring for the visitors with a close range header that was nothing more than they deserved, while Josip Ilicic doubled the advantage in the second half from the penalty spot after he had been elbowed by Franck Kessie.

The misery was compounded as Duvan Zapata made it 3-0 late on, and Inter’s draw against Udinese means the Diavolo stay top.

Stefano Pioli was able to welcome Theo Hernandez back into his starting XI at left-back while he also gave a nod to new signing Soualiho Meite, albeit in the unnatural position of attacking midfielder. Pierre Kalulu came in for the suspended Romagnoli, while Rafael Leao got a start on the left wing over Jens Petter Hauge after serving his ban.

It took Milan just a minute to carve their way through Atalanta as Leao played a through ball to Zlatan Ibrahimovic, who opened his body up and curled an effort wide of the far post with only Gollini to beat, but in the end he was offside anyway.

The Rossoneri kept pushing though, and moments later a vital intervention denied the Swede making it 1-0 from a teasing Theo Hernandez cross. From the resulting corner Meite headed over from close range when he should have at least tested the goalkeeper.

Atalanta’s early game plan was to try and get Duvan Zapata in isolation with Calabria and the forward was shut down the first couple of times, but forced Kjaer to make a vital intervention when he burst past the full-back in the eighth minute as the visitors began to get on top.

Kessie will have breathed a sigh of relief in the 13th minute when Atalanta countered and found Hateboer, whose effort skimmed the boot of the Ivorian midfielder and thankfully span into the side netting.

Donnarumma was called into action moments later as Gasperini’s side took a firm grip of the game, with the Italy international strong-handing a Hateboer cross/shot to safety.

Ilicic then had two big chances to give La Dea the lead. The first came when he found space on the edge of the box and dragged an effort narrowly wide with Donnarumma stood still, and the second when he mishit his shot inside the box having been fed through.

Just after the 25-minute mark, Atalanta made their early dominance pay. Cristian Romero was the man who got his name on the scoresheet – his first league goal for the club – but it was a delightful cross from Gosens that gave him the easy job of heading home from close range under Donnarumma.

Zapata could have made it 2-0 just past the half-hour mark when he was found near the edge of the six-yard box with a free-kick, but thankfully for Milan he mishit his effort into Donnaumma’s hands.

Atalanta had a big chance to double their advantage with a free kick just outside the box after Theo had brought down Ilicic, and Donnarumma made an excellent save as Ilicic got his effort through the wall.

Milan had a huge chance to level four minutes before the break as Tonali whipped in an absolute peach of a free-kick all the way to the far post where an unmarked Ibrahimovic was on hand to fire into the side netting on the volley in what was an inexplicable miss.

As was perhaps to be expected, Pioli reacted to a poor first half by taking Soualiho Meite off for the more natural playmaker Brahim Diaz.

Atalanta were awarded a penalty six minutes into the second half as Ilicic backed into Kalulu and received an arm in the face from Kessie. Donnarumma guessed the right way, but the Slovenia international hit his effort low and hard and squeezed it under. 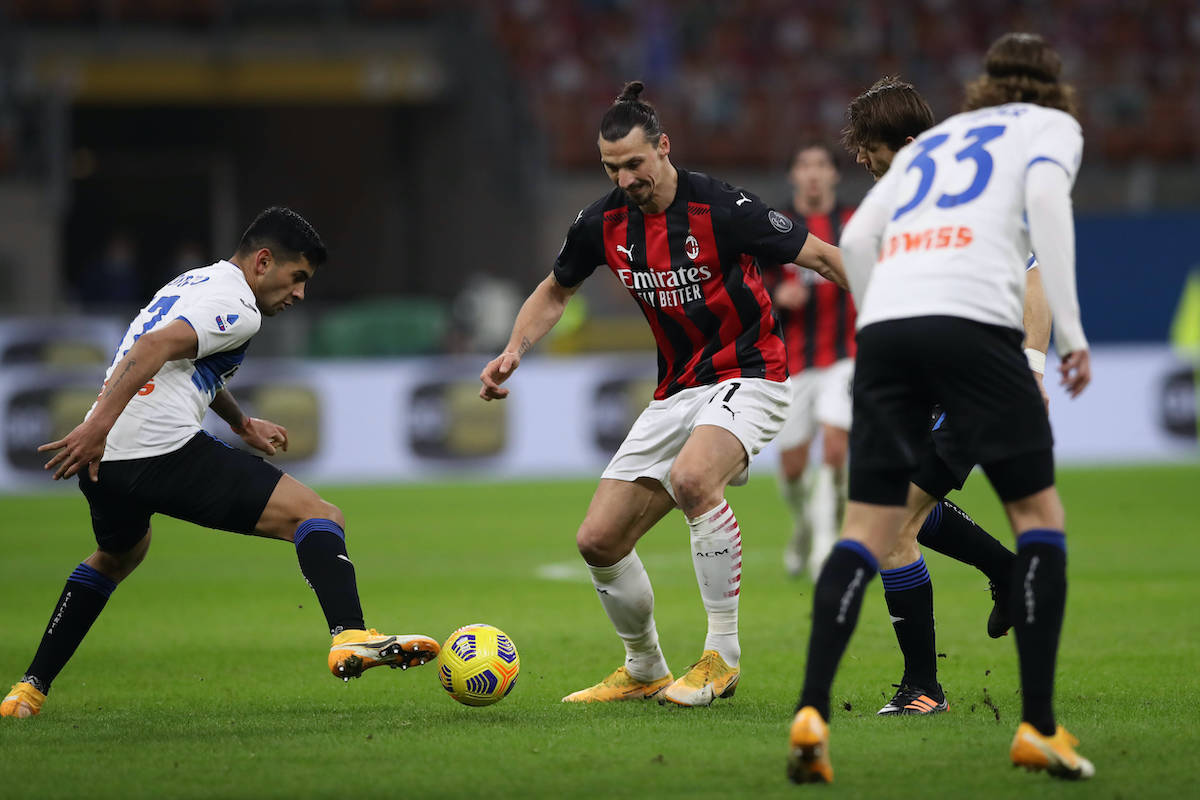 There was a further moment of worry for Milan in the 55th minute as Kalulu was stretchered off not long after the second goal went in. Mateo Musacchio came on in his place.

If there was any question about who would seize the momentum in the second half, Atalanta responded to that emphatically and Zapata arguably should have wrapped the game up with a free header on the hour mark that he sent over.

Ilicic was inches away from making it 3-0 to the visitors as he wriggled away from Musacchio and dragged an effort that looked destined for the bottom left corner but ended up rolling just wide.

With just over 20 minutes left, Pioli tried a very Croatian-flavoured roll of the dice as Ante Rebic and Mario Mandzukic came on for Castillejo and Leao.

Mandzukic almost made an instant impact as he forced Gollini into his first real save. Kessie went down as he was about to shoot and the ball rolled to the No.9, who couldn’t get his effort past the Atalanta stopper from close range.

The away side came close again to making it a three-goal lead as Zapata rose and headed off the inside of the post when he was unmarked inside the area.

Zapata did get his goal and Atalanta did kill the game not long after as they continued to break at will. He was found unmarked on the far side of the box and the Colombian made no mistake in firing past Donnarumma with a low effort.

It was a night to forget for the Diavolo, who barely even threatened in the closing stages despite so many attacking players being on the field.