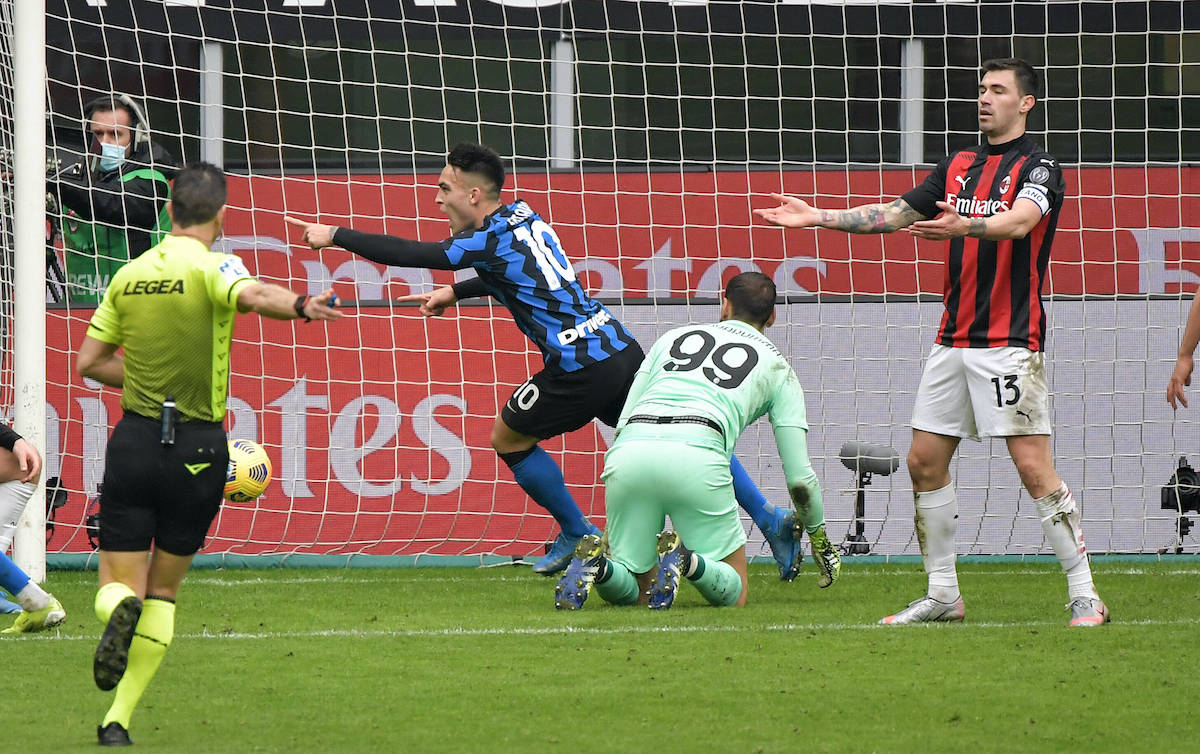 AC Milan’s Scudetto hopes suffered a huge dent on Sunday afternoon as they were beaten 3-0 by Inter in the Derby della Madonnina.

It was Inter who got off to the ideal start as they took the lead inside the first few minutes through Lautaro Martinez, and he doubled the advantage early in the second-half too.

Samir Handanovic was in inspired form for the Nerazzurri and made several key saves to deny Zlatan Ibrahimovic, Sandro Tonali and later Hakan Calhanoglu, and Romelu Lukaku’s goal on the break to make it 3-0 would ultimately kill the game off.

The defeat means that Milan are now four points adrift of their rivals from across the Navigli and the trip to face Roma coming up all of a sudden becomes big for Champions League qualification.

Inter took the lead less than five minutes into the game as Milan completely switched off defensively. A break led by Lukaku saw the Belgian’s cross blocked back out to him, and he crossed perfectly for Lautaro to head home in acres of space past Donnarumma.

Kjaer went into the book inside the 11th minute for tripping Lautaro as the Argentine spearheaded a counter as the ‘away’ side continued their bright early start.

Calabria had to be alert moments later as Lautaro was played in behind by a nice through ball from Eriksen, though the Milan full-back intervened well at the far post to prevent the arriving Perisic from having a big chance.

Milan’s first chance on goal came in the following minute as pinball inside the Inter box resulted in Ibrahimovic using an audacious back-heel to divert the ball goalwards, but Handanovic leapt well to catch in both hands.

The two-man frontline of Lukaku and Lautaro continued to cause Milan all kinds of problems for the Rossoneri’s defence, and Donnarumma will have been relieved to see the former drag his shot wide in the 21st minute having spun around inside the box.

Inter were close to making it 2-0 when Perisic found space down the left wing to cross into a dangerous area where Lukaku was waiting on the edge of the box but was ultimately put off by Kjaer’s sliding challenge in front of him as the ball flashed through the six-yard box. Kjaer again did well moments later to cut out a low ball from the same man.

Theo Hernandez had a big chance to level the game on the half hour mark as he brought the ball down inside the box as Kessie’s dink was not properly cleared, but the Frenchman dragged his shot wide of the left post with Handanovic stranded.

Conte’s side were almost certain to double their advantage when Perisic cut inside onto his right foot and saw his effort parried by Donnarumma into the path of Lautaro, who somehow spurned his effort over the bar from just a few yards out.

Ibrahimovic was Milan’s reference point as they tried to go a more direct route, and the Swede saw his second effort of the game saved against by Handanovic after he had turned and fired first time on the edge of the box on the half-volley.

The Rossoneri really should have been level a few minutes before the break when the press saw Milan win the ball back in Inter’s third but when Calhanoglu had the seemingly easy job of feeding Rebic in space for a dangerous shot, the No.10 somehow overplayed it and the chance was dead.

The last action of the first half should really have been a two-goal lead for Inter as Eriksen lifted a free-kick towards the head of Skriniar at the back post, but the Slovakia international looped his header onto the roof of the net.

Milan started the second-half on the front foot and Handanovic was called into action in the opening exchanges as Tonali picked up a loose ball and shot towards the top corner, forcing an excellent reflex save from the Slovenian. He also made two incredible saves on Ibrahimovic as it looked like a rocket had finally been lit under the Diavolo.

Pioli’s men continued to push and Ibrahimovic almost found the perfect knockdown into the path of Kessie after Calhanoglu’s dink, but an excellent recovery challenge prevented the Ivorian from a clear-cut chance.

However, Milan would be made to rue their missed opportunities as Inter made it 2-0 on the break. It was Lautaro who once again got on the scoresheet and he couldn’t have had an easier finish in truth as a Nerazzurri overload resulted in Perisic having the easy job of squaring to the Argentine on the edge of the six-yard box for a simple near-post finish.

Tonali continued to get into advanced positions and could have had a golden chance to get his side back into the game but got his legs tangled inside the area having been found by a Calhanoglu through ball.

Donnarumma was called into action again just after the hour mark but responded well to Lukaku’s powerful shot with the former Manchester United man having cut in onto his left foot.

It was 3-0 not long after, and there was nothing that Donnarumma could do to stop Lukaku’s next effort. He burst through and found himself in isolation against Romagnoli, finding space to shoot into the bottom corner and beat the Italian keeper at his near post.

Pioli’s roll of the dice came when Rafael Leao and Soualiho Meite came on for Saelemaekers and Tonali, while inside the final 20 minutes Samu Castillejo also came on for Ibrahimovic.

The Rossoneri dominated possession in the closing stages but couldn’t put a dent in Inter’s lead as they saw out the final few minutes to record a huge win.