Milan took the field at the San Siro against Sassuolo. It was a big match for the Rossoneri as they entered the pitch with the opportunity to pass their city rivals, Inter, for third place in the table.

Milan started out the match controlling possession, although they committed some sloppy passes which fortunately did not cause any harm. They had their first set piece of the match in the ninth minute after a foul on Hakan Calhanoglu just outside of the box; however, the Turkish player delivered a poor ball into the box and nothing came of the opportunity.

Krzysztof Piatek had the first shot on goal of the game just a minute later, but it was a weak effort and directed straight at Andrea Consigli.

Sassuolo had their first set piece of the match after Calhanoglu fouled former Milan player Manuel Locatelli, but the away side could not make the most of it. 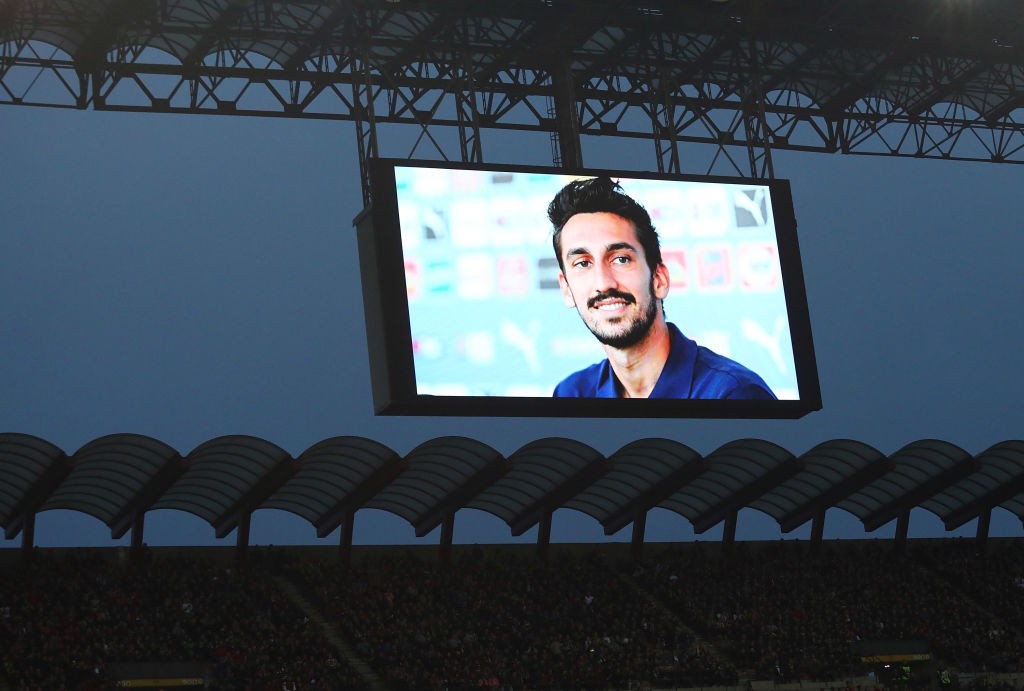 In the 13th minute play was stopped to pay respect to former Milan youth product and Fiorentina captain Davide Astori, who passed away one year ago. Sassuolo began to grow into the game after the Astori tribute, and earned their first corner of the game in the 19th minute, but again could not threaten the Milan defence.

Sassuolo kept up the pressure and created the first real chance of the game as Filip Djuricic redirected a dangerous cross towards the Rossoneri goal, but the home side were bailed out by a great save from Gianluigi Donnarumma.

The visitors kept up the pressure and controlled the match through the 26th minute, but Milan was able to have their first decent chance of a game on a counter-attack where Suso crossed the ball into the box towards Lucas Paqueta. Unfortunately, the Brazilian could not hit it cleanly and the score remained 0-0.

After a dangerous cross from Calhanoglu that was deflected and sent out for a corner, Milan made the most of the opportunity. Suso whipped the corner in and although Mateo Musacchio celebrated as if it were his goal, the official ruling was an own goal by Sassuolo defender Pol Lirola. 1-0 to the home side. 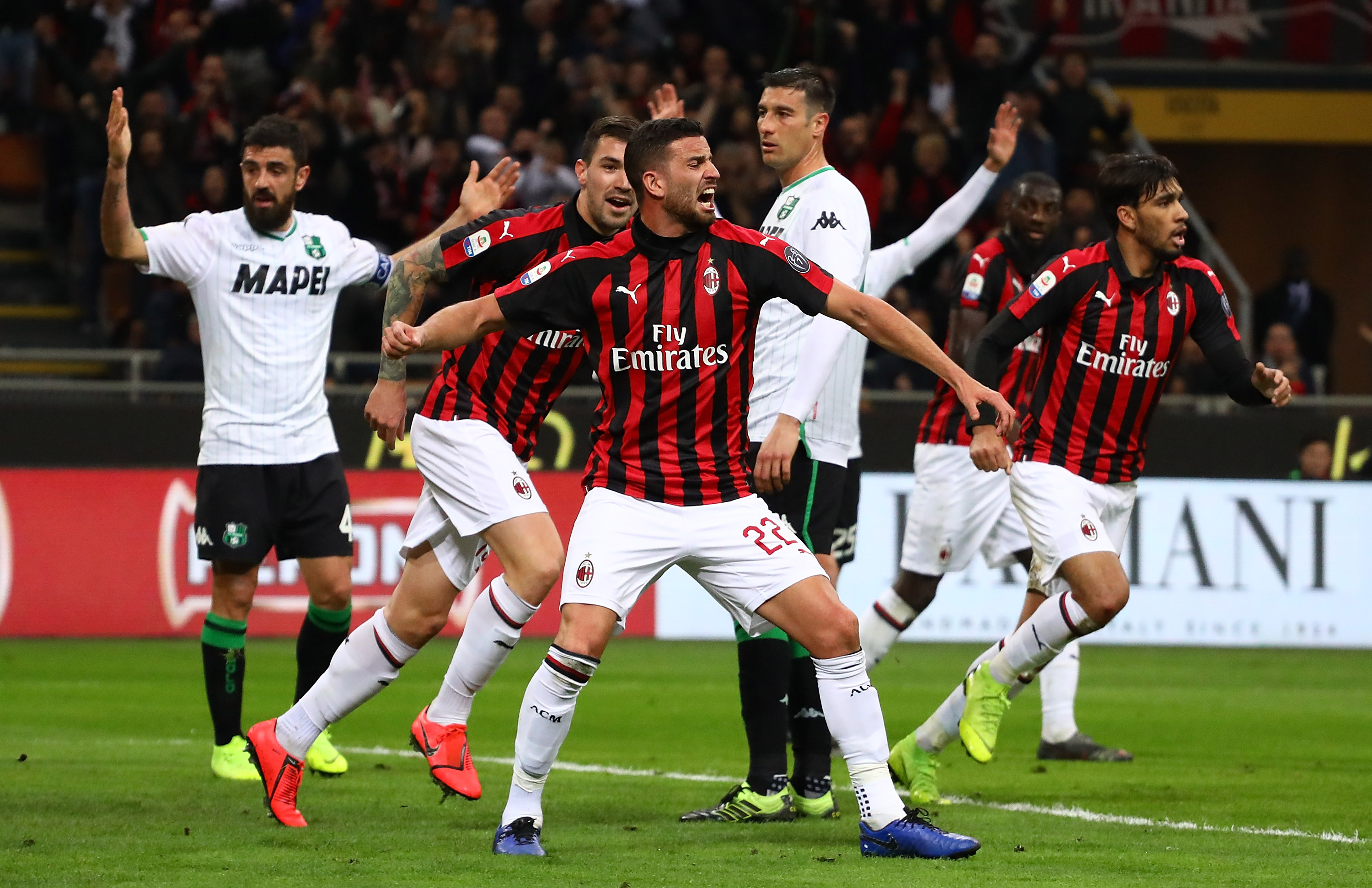 Sassuolo responded by attacking, and earned a free kick outside the center of the penalty area after a Bakayoko foul on Locatelli; however, the Neroverdi couldn’t take advantage of the opportunity.

They kept attacking and Jeremie Boga, who had been the most dangerous player of the first half, curled a ball in during the 40th minute but luckily for Milan it just hit off the post and went out. It was also Boga who found the back of the net in the 42nd minute, but it was ruled offside and the score remained 1-0.

The last chance of the first half came for Sassuolo as Manuel Locatelli was again fouled outside the box, this time by Franck Kessie. Berardi hit the ball well but Donnarumma made another good save and gobbled up the deflection before the Neroverdi could get to it. With that, an entertaining first half came to an end in favour of Milan, 1-0. 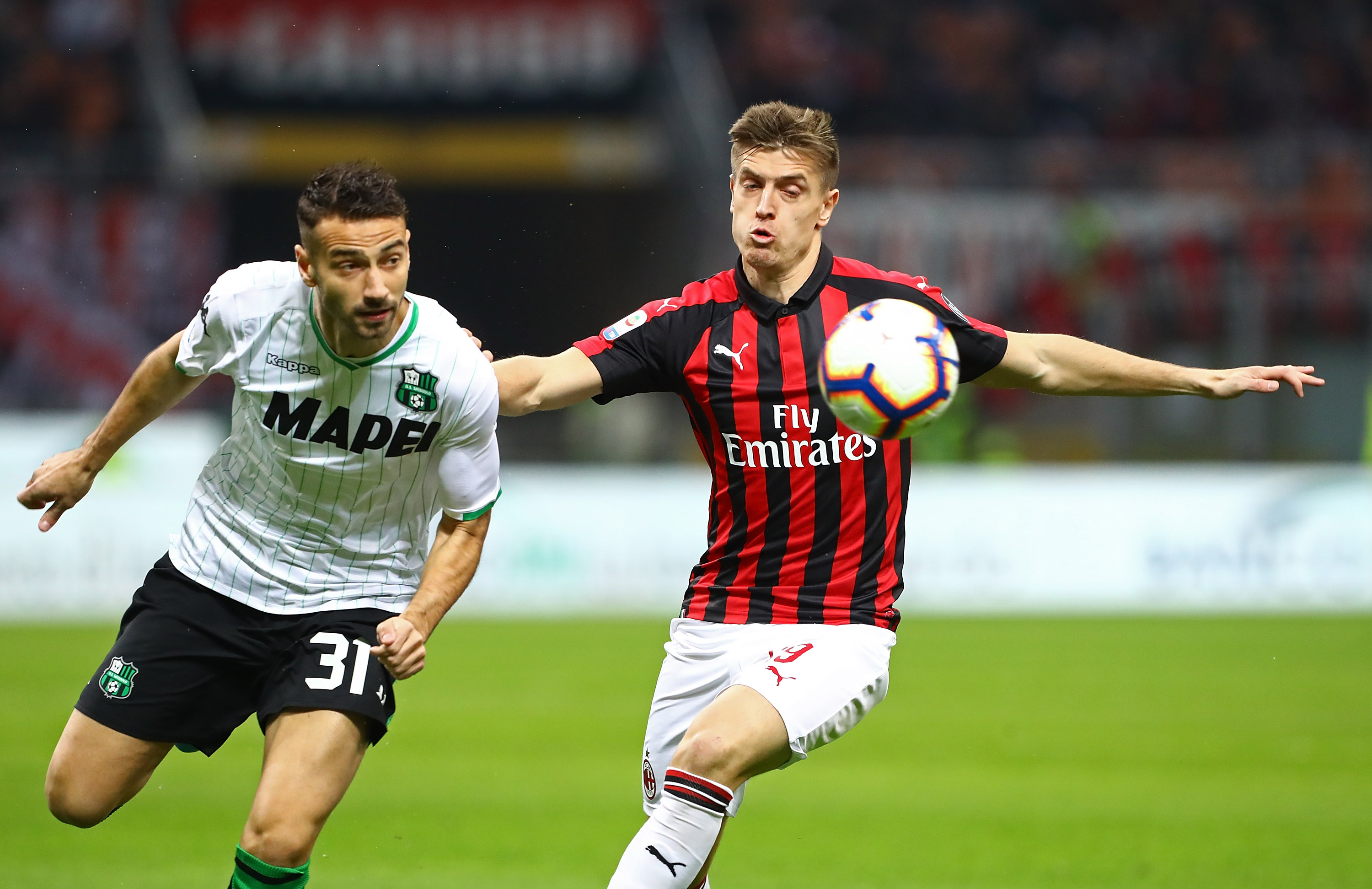 Sassuolo began the second half on the front foot, looking to equalize. A Bakayoko foul on Boga outside of the box created a set piece opportunity for the Neroverdi. Berardi eventually found space for a shot off the set piece, but it was directed wide of Donnarumma’s goal.

In the 51st minute, Lucas Paqueta became the second Milan player to be booked. The set piece created some uncertainty in front of the Milan goal, but luckily they were able to clear the ball from danger before any harm. Moments later Milan made their first change of the match when Lucas Biglia replaced Bakayoko. The French midfielder received a yellow card earlier in the match, therefore Gattuso decided to take him off the field early in the second half.

Sensi whipped in a dangerous corner kick in the 57th minute towards Donnarumma, but the young goalkeeper did well to punch the ball away from danger.

Sassuolo, still looking for an equalizer, made their first change of the match in the 63rd minute as Manuel Locatelli left the pitch. He received a warm hand from the Milan fans, and was replaced by Medhi Bourabia.

Right after the substitution there was a moment of end-to-end play. Sloppy ball control from Milan allowed Berardi to shoot from a decent area, but Donnarumma once again made the stop.

Things really heated up as a long ball was played over the top to Piatek. The ball forced Andrea Consigli off his line as he tried to head the ball away from danger from outside of the penalty area. He misplayed the ball and fouled Piatek who was clear on goal which led the referee to give a straight red card. 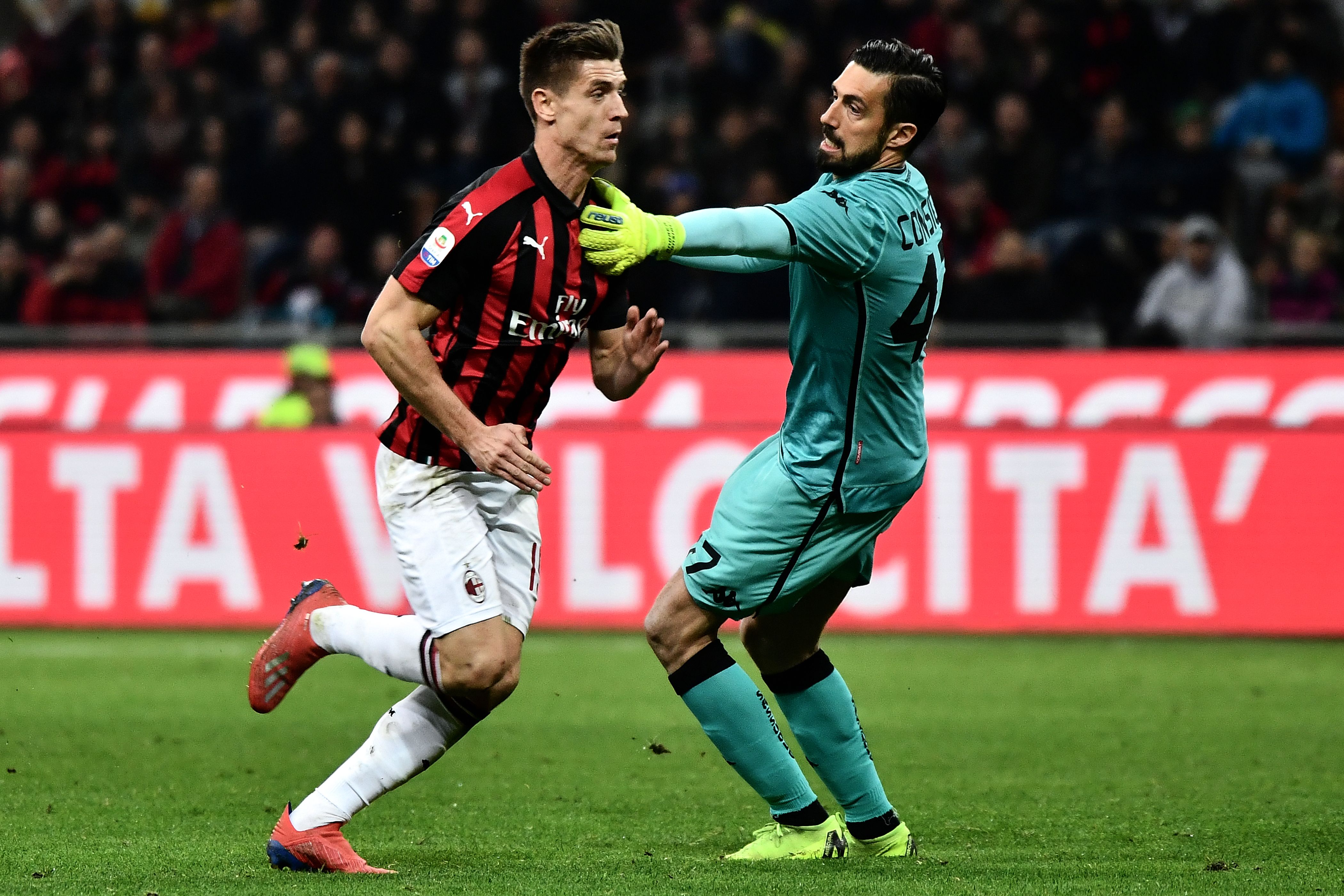 The decision was briefly reviewed by the referee at the direction of VAR; however, he confirmed his original decision and Consigli was sent off. Francesco Magnanelli was sacrificed in order for new goalkeeper Gianluca Pegolo to enter.

The ensuing free kick from the foul was taken by Suso but the wall deflected the free kick and it was sent out for a corner kick.

Milan made their second change during the 73rd minute, taking off Lucas Paqueta in favor of Samu Castillejo. Sassuolo also made their third and final change simultaneously, bringing on former Rossoneri player Alessandro Matri to replace Djuricic.

The home side had a great opportunity during a counterattack in the 76th minute as Kessie and Piatek broke free, but the Ivorian directed his shot straight at the Sassuolo goalie and Milan were unable to increase their lead.

In the 83rd minute Gattuso made his third and final substitution, taking off Piatek to bring on Patrick Cutrone. He made an immediate impact leading Kessie into a nice position; however, once again the midfielder could not send the ball into the back of the net. The ex-Atalanta player received another knock to his ankle during the play and was briefly taken off the pitch to be tended to by the medics.

Milan looked nervy and Sassuolo continued to press for an equalizer late in the game, and Jeremie Boga was brought down by Calhanoglu just outside of the area. It was Berardi who stood over the ball once again for the visitors, but he sent the ball over the crossbar.

Five minutes of stoppage time was given by the third official. Ricardo Rodriguez received a yellow card in the 92nd minute for time wasting during a throw-in. Sassuolo had one last chance at the end as Matri received the ball in the penalty area but directed the shot towards Donnarumma. The ref then blew the whistle and Milan celebrated.

Pretty or easy it wasn’t, but Milan took home the very important three points and leapfrogged their city rivals into third place.