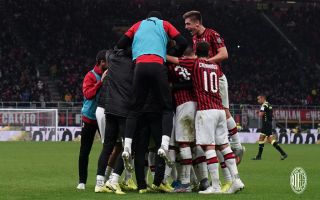 Pioli made a few changes to the starting XI compared to the game against Roma with Andrea Conti, Lucas Biglia, Rafael Leao and Suso sitting on the bench.

Instead, Leo Duarte was used at right back and Samu Castillejo played on the right wing, while Krzysztof Piatek and Ismael Bennacer came back into the fold.

While Milan looked better in the second half they lacked efficiency in the final third and it was only substitute Suso’s brilliant free-kick that sealed the the three points.

However, the most important thing for the team was to get back to winning ways and have morale boost for the upcoming three fixtures against Lazio, Napoli and Juventus.

The coach started the game with Leo Duarte as a right back after both Calabria and Conti had made crucial mistakes in the past two games.

The Brazilian played his third game in a Rossoneri shirt – his second as a starter – and did not disappoint. He showed good positioning and composure and being on the flank allowed him to use his pace and ability on the ball.

In the second half Calabria came on for the injured Musacchio and Duarte subsequently moved into the centre of the defence, barely putting a foot wrong.

It seems though the former Flamengo player is ready to start alongside Romagnoli as he offers more than Musacchio and Milan will hope that he further develops as well.

2. Problems on the wing remain

Despite Suso being dropped from the starting eleven in favour of Castillejo we did not see much improvement on the right. With Hakan not providing enough on the other side, it took a set piece to finally break the deadlock which should worry Milan given the standard of opponent.

Hakan, Castillejo and Suso are failing to make an impact on the game from the start and the Rossoneri boss should seek alternatives in the upcoming games against Lazio, Napoli and Juventus as those games may well give a huge confidence boost or just break the team’s moral.

Bennacer got the nod over Biglia in this game and while he had good runs forward, carrying the ball with his dribbling skills and a few nice fast passes forward, he also misplaced a lot of passes and gave the ball away too easy at times.

While he undoubtedly provides something more than Biglia, he need to further develop as remove those mistakes from his game if he wants to have a pivotal role in the side.

The same goes for Lucas Paqueta. The Brazilian showed his skills once again, making good runs forward and shaking off opponents, but his decision-making in the final third let him down and he gave away the ball on multiple occasions.

Without a doubt has the potential to be a world class player but has a lot to work on until he gets there.

Piatek came back in the starting eleven and showed to be better physically as he looked faster and sharper with better movements off the ball, particularly in the first half.

Once again he didn’t get much service though and at times found himself completely out of the game, and that is something that Piatek is criticised for: failing to make an impact when he isn’t scoring.

However, with him looking sharper and Leao being able to make chances, Pioli might seek a solution where they are both on the field as that may well create more opportunities.

It is honestly baffling that Ante Rebic cannot find a place in this Milan side with all the problems on the wings that the team has.

Under both Giampaolo and now Pioli we have seen little from the Croatian, who has proved himself with both Eintracht and his national team.

Although he has not done much in his 73 minutes of action thus far, it is fair to say that he needs a bit of playing time to be able to show his true capacity.

Pioli should try to push him into the starting eleven for the upcoming fixtures, as his speed and physicality can cause trouble for the opposition as well as allow him to keep hold of the ball when necessary.