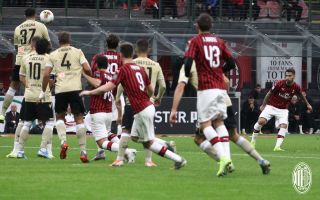 AC Milan gained a much-needed three points with a narrow 1-0 win over SPAL at San Siro on Thursday night.

It was far from a vintage performance from the Rossoneri, but substitute Suso’s trademark free-kick just after the hour mark proved to be the decisive moment in the game.

Stefano Pioli’s first win as Milan boss sees his side move into the top half of the table and six points behind Roma in fourth ahead of tough games against Lazio, Juventus and Napoli.

The home side fired the first shot on goal of the game as a loose ball fell to Lucas Paqueta 18 yards out; the Brazilian drawing a good low save from Etrit Berisha in the SPAL goal.

In truth though it was the visitors who asserted their dominance on the goal early on, with Andrea Petagna ever-present causing issues for Milan, who were struggling to string three passes together.

Despite this, it was Pioli’s side who should have taken the lead 12 minutes in when Theo Hernandez’s cut-back was steered forward by Krzysztof Piatek, but Samu Castillejo – in for the out-of-form Suso – somehow hit the bar from a yard.

Moments later a ball was knocked over the top for Piatek and the Poland international showed confidence to hit it first time, though his effort whistled over the bar to Berisha’s relief.

The game could fairly be described as scrappy, full of niggly fouls without either side being able to generate any real positive momentum.

Milan did finally make Berisha work on the half hour mark though as Franck Kessie played in Calhanoglu who rolled his shot towards the far post but drawing an easy save.

Gianluigi Donnarumma made his first save of the night as first Hernandez then Alessio Romagnoli gave the ball away in a dangerous area; the former Milan striker firing a low effort from 20 yards straight into Gigio’s hands.

Milan’s first half was summed up perfectly when, in the 38th minute, Paqueta was bearing down towards goal but pinged his pass straight at Calhanoglu’s heels allowing SPAL to break.

Tempers flared not long after when Paqueta went down injured off the field and the visitors played on, with Leo Duarte and Donnarumma both being booked when play eventually stopped for confronting the SPAL players.

Stefano Pioli made a shock change at half time as Davide Calabria came on for Mateo Musacchio, with Duarte shifting inside as a result.

Milan finally had the ball in the back of the net two minutes into the second half as a pinpoint pass from Paqueta found Hernandez running in behind. The Frenchman finished nicely, but was correctly flagged offside.

Paqueta was once again involved five minutes later as he found space just outside the area, but the former Flamengo man dragged his shot well wide much to the dissatisfaction of an impatient home crowd.

The theme of wastefulness continued when moments later Calhanoglu – having won the ball back high up the pitch – decided to shoot instead of rolling the ball inside to Castillejo who appeared to have an easy finish on.

Another change followed for Milan after 57 minutes as Castillejo was then taken off in favour of Suso.

There was a moment of controversy just after the hour mark as Calabria fired a ball over the top to Piatek who was brought down by Francesco Vicari seemingly through on goal, but the referee chose a yellow card instead of red.

In very fitting fashion, Suso repeated his usual trick on Halloween, curling the resulting free-kick over the wall and into the bottom corner to give Milan the lead.

WHAT A GOAL BY SUSO! pic.twitter.com/Rb8zjONeWB

Milan then went forward in search of a second goal to kill the game and it almost came through Paqueta. The Brazilian led the Rossoneri on a break and fooled one defender leaving himself one-on-one, but Berisha saved well.

Moments later Paqueta had another chance as Kessie pulled the ball back to him inside the box, but the shot was hooked well over the bar.

Sergio Floccari drew a save from Donnarumma seven minutes from time but – similar to Petagna’s strike in the first half – it was straight into the keeper’s hands.

Jasmin Kurtic had a huge chance to equalise in the closing minutes as he headed a free-kick over the bar from close range as the nervous energy continued to resonate around San Siro.

Pioli made his final change two minutes from time, bringing Paqueta off for Giacomo Bonaventura, and in the end the home side managed to navigate the last few seconds with ease.