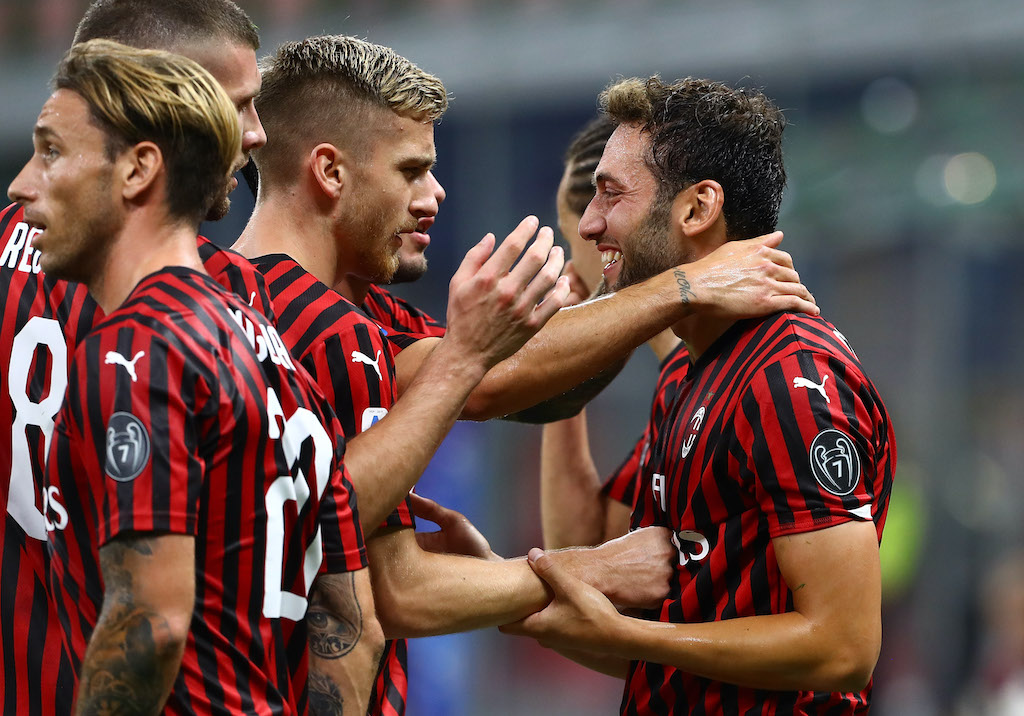 AC Milan produced a heroic effort at San Siro on Friday night as they held a red hot Atalanta side to a drew despite so many selection problems.

The Rossoneri actually took the lead in the first half thanks to an incredible curling free-kick from Hakan Calhanoglu that completely caught Gollini out in the Atalanta goal.

Gianluigi Donnarumma – wearing the captain’s armband – then provided some heroics as he saved a penalty from Ruslan Malinovskyi given for a stamp by Lucas Biglia.

Duvan Zapata did get the Bergamasca side back on level terms before the interval, but ultimately Milan would hang on to claim a precious point that many perhaps were not expecting.

The away side began the game on the front foot and De Roon sent captain Gianluigi Donnarumma sprawling with an effort from distance that he was pleased to see whistle past the post.

La Dea continued to have the lion’s share of early possession, and Duvan Zapata arguably should have done better with his free header inside the box from Papu Gomez’s free-kick.

Gomez was then given a free run at the Milan defence however the Argentine dragged his shot wide from around 20 yards, but the early warning signs were there.

Despite the early pressure from Atalanta, it was Milan who took the lead in the 14th minute. Rebic won a free-kick down the left flank, and Calhanoglu stepped up and scored with an incredible curling strike into the far top corner that Gollini could only get a finger tip to.

Gollini was drawn into another save five minutes after the goal, with his low angled drive seemingly heading inside the far right post until the sprawling stop sent it for a corner.

In the 25th minute, Atalanta were given the chance to level from the penalty spot after a VAR check found that Biglia had stamped Malinovskyi with a late challenge inside the box. The Ukranian dusted himself down to take the penalty, but Donnarumma guessed right and saved well.

Up the other end Rebic had Milan’s latest chance, glancing a header wide from Calabria’s cross.

Calhanoglu thought he had come inches away from doubling Milan’s advantage when he cracked the crossbar when through on goal, though the offside flag did go up.

In the 34th minute though it was 1-1. A shot from the edge of the box deflected through to Zapata, who brushed off the challenge of Calabria to slot under Donnarumma and level the game.

The visiting side started the second half on top too, and Milan were relieved to see a shot from De Roon deflected away for a corner in the opening eight minutes.

Gian Piero Gasperini’s team were close to taking the lead just before the hour mark as Papu Gomez’s first time shot from the edge of the box wrapped around the near right post albeit just wide after a feed from Zapata.

Milan made a triple sub bang on the hour mark, with Giacomo Bonaventura, Rafael Leao and Rade Krunic coming on for Biglia, Rebic and Calhanoglu.

A few minutes later there was another change as Samu Castillejo made his long-awaited return, coming on in place of Saelemaekers as Pioli opted for fresh legs heading into the final 20 minutes.

Atalanta pressed for an all-important second goal, and Donnarumma was relieved to see a deflected Zapata shot whistle past the far post with Kjaer having got his body in the way.

Then it was the Rossoneri’s turn to threaten as Rafael Leao led Milan on a counter-attack, and Bonaventura was incredibly close to making it 2-1 as his shot hit the based of the post and bounced back over Gollini’s head.

From the resulting corner Castillejo volleyed wide after a headed clearance had fallen to him unmarked on the edge of the box.

Inside the final five minutes there was an appeal from some members of the Milan team as Ibrahimovic went down in the box following a cross from the left, though replays showed the Swede had thrown himself to the ground.