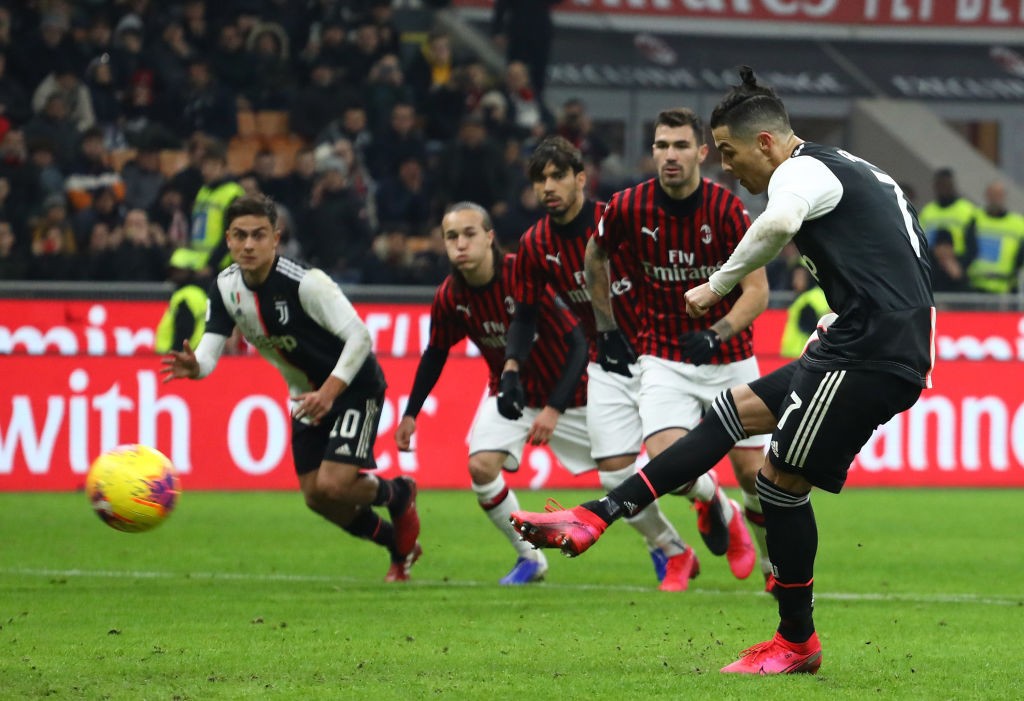 AC Milan 1-1 Juventus: Referee at the centre of controversy as Ronaldo’s late penalty earns a draw

AC Milan and Juventus played out a 1-1 draw at San Siro on Thursday night in the first leg of their Coppa Italia semi-final.

After a goalless opening 45 minutes, the Rossoneri took an arguably deserved lead as Ante Rebic continued his fine scoring form with an excellently taken volley.

However, Theo Hernandez saw red inside the final 20 minutes for a second yellow card, and just as it looked as though Milan would still see the game out there was yet more controversy.

Davide Calabria was penalised by VAR as Cristiano Ronaldo’s shot his his elbow from a yard away, and the Portuguese tucked away the spot kick to ensure it would be all square heading into the second leg.

Stefano Pioli made one change to the starting XI that lost the derby to Inter at the weekend, with Andrea Conti suspended meaning Davide Calabria got a chance to stake a claim for the right-back spot.

Milan got a sniff in the first minute of action as Ante Rebic clipped a teasing ball towards Zlatan Ibrahimovic at the far post, but he headed onto the roof of the net after climbing to meet it.

Just 60 seconds later another effort was fired on goal; this time Franck Kessie drilling narrowly wide from 25 yards after a nice lay-off from Theo Hernandez.

The Rossoneri were well up for it and fired a third attempt towards goal in the fifth minute, this time Rebic seeing his effort from distance just about parried clear by Gianluigi Buffon.

Theo Hernandez began to wreak havoc down the left, and the Frenchman did well to tee up Ibrahimovic with a low cross that the Swede backheeled wide of the far post.

Midway through the first half Calabria was involved in some good build-up play, linking up well with Kessie before forcing Buffon into a sprawling save with his effort from just inside the area.

Ibrahimovic was booked just before the half hour mark for coming off better in an aerial challenge with Matthijs De Ligt, meaning he will miss the second leg through suspension.

A key success from Sunday’s derby loss was the pressing game through the first half and Milan continued that on Thursday. After winning the ball back high up the pitch, Ibrahimovic produced a perfect pull-back to Rebic in the 29th minute, but his effort was tame and straight at Buffon.

Donnarumma was called into action for the first time 10 minutes before the break, diving full stretch to his right to stop a blistering attempt from Juan Cuadrado that was destined for the bottom corner.

The game begun to get tasty a few minutes before the break, and Theo Hernandez ensured he will miss the return leg too after protesting a foul given against him.

Milan started the second half with a fantastic opportunity to break the deadlock. A ball up to Ibrahimovic was flicked into the path of Rebic who did well to steady himself through on goal before firing at Buffon who saved well with his legs.

Referee Paolo Valeri was drawing the wrath of the 70,000 plus home crowd, and he cut short an advantage for Milan where Rebic was through on goal to blow for a foul, not even booking the offender in question and leaving the Milan team baffled.

After Dybala had attempted to curl one into the top corner at one end, seeing his effort easily saved, Buffon was then called into action at the other twice in quick succession. First of all Ibrahimovic found space inside the area and saw his fierce effort tipped wide at the near post, and from the resulting corner a deflected Hernandez strike from 25 yards drew another corner.

Moments later, Milan took the lead. A cross floated towards Ibrahimovic at the far post ended up over the Swede’s head, but Rebic had ghosted in round the back of De Sciglio to fire home on the volley past a diving Buffon.

The Bianconeri had a huge shout for a penalty waived away not long after the restart as Rebic seemed to catch Cuadrado with his outstretched arm, but Valeri let play continue after consultation with VAR via his headset.

With just under 20 minutes remaining, Milan went down to 10 men. Hernandez was late into a challenge with Dybala which sent the Argentine crashing to the floor and saw the left-back receive a second yellow. That came moments after Castillejo was booked, meaning he will miss the return leg too.

Pioli adjusted accordingly by taking off the goal scorer Rebic in place of Diego Laxalt, who actually featured against Milan for his loan side Torino in the quarter-finals.

Alexis Saelemaekers came on for his second appearance in a Milan shirt as he replaced Castillejo to shore up the right side.

The third and final sub came four minutes from time as Lucas Paqueta came on for Hakan Calhanoglu.

Just as it looked like Milan were heading for a clean sheet and an advantage to take into the second leg, controversy struck. Ronaldo saw a shot blocked by Calabria’s arm, but the full-back was just a yard away and his arm was by his side. Valeri gave it after checking VAR, and Ronaldo sent Donnarumma the wrong way to earn Sarri’s side a draw.