AC Milan faced off against Manchester United at the Rose Bowl in Southern California. It was the first appearance in the International Champions Cup for both squads.

Milan started out on the back foot as Davide Calabria caused a foul right outside of the box due to sloppy defending. United were rewarded with a free kick that was ultimately dealt with by the Rossoneri defence.

Milan grew into the match and in the fifth minute, a nice cross by Ignazio Abate found Patrick Cutrone, who then passed the ball to Franck Kessie inside of the penalty area. The Ivorian shot the ball but hit the side netting. 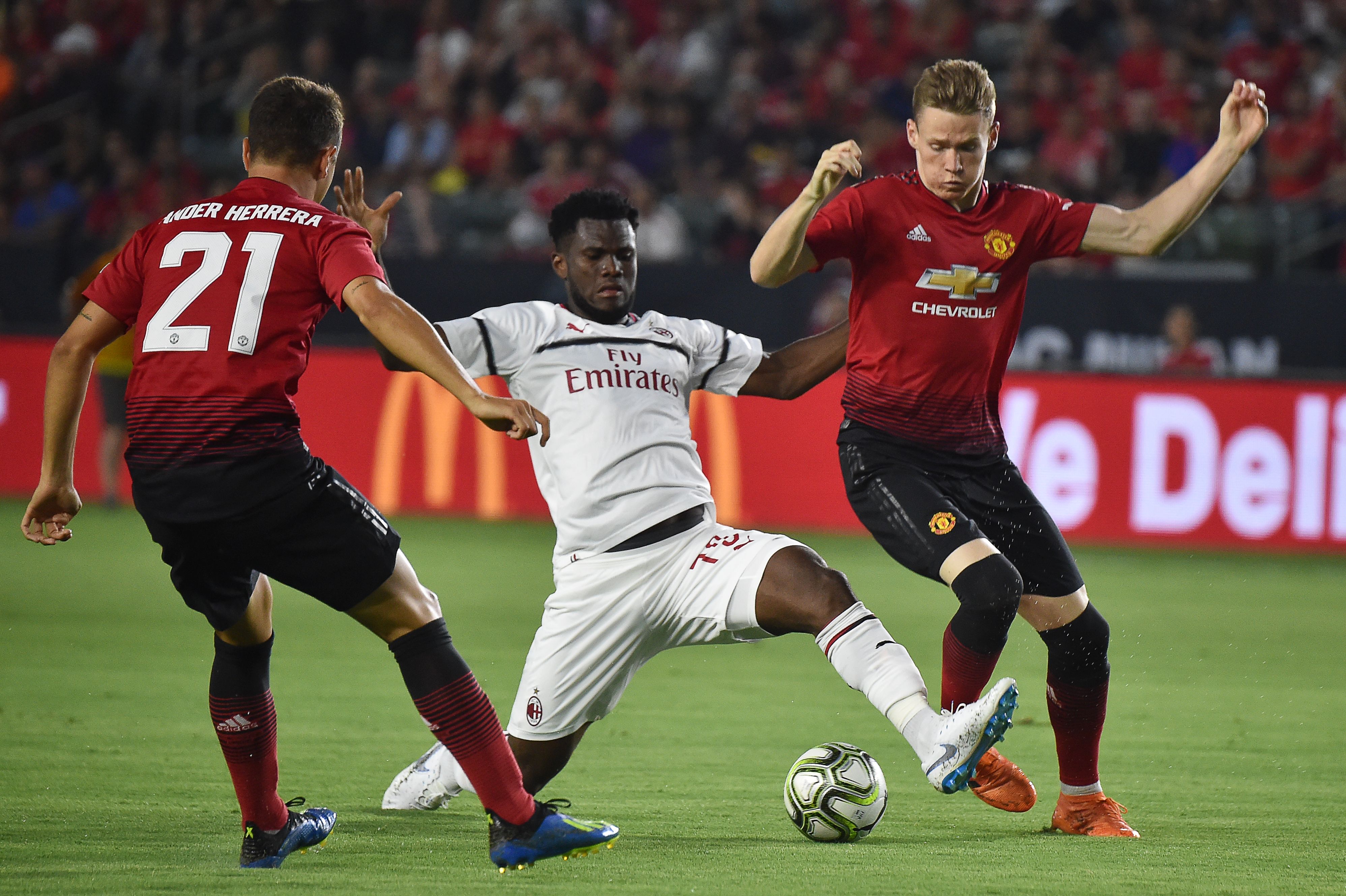 In the seventh minute, Suso fouled Alexis Sanchez right outside of the box which led to a United free kick. Sanchez opted to shoot the ball from the free kick which forced another good save from Donnarumma.

In the 11th minute, a nice bit of buildup play by Milan led to another Kessie shot that went well wide of the post and out of play.

The ensuing goal kick led to the first goal of the match for Manchester United. Lee Grant sent the ball downfield from the goal kick and it was headed down to Juan Mata who had a great touch and slotted the ball nicely to Alexis Sanchez.  He then found himself one-on-one with Milan’s teenage goalie and slid the ball past him to make the score 1-0.

Milan did not take long to answer, as they quickly equalized in the 15th minute. A beautiful ball from Leonardo Bonucci found Suso, who had a nicely timed run down the middle of the field and after a couple of bounces, fired into the bottom right corner to make it 1-1. 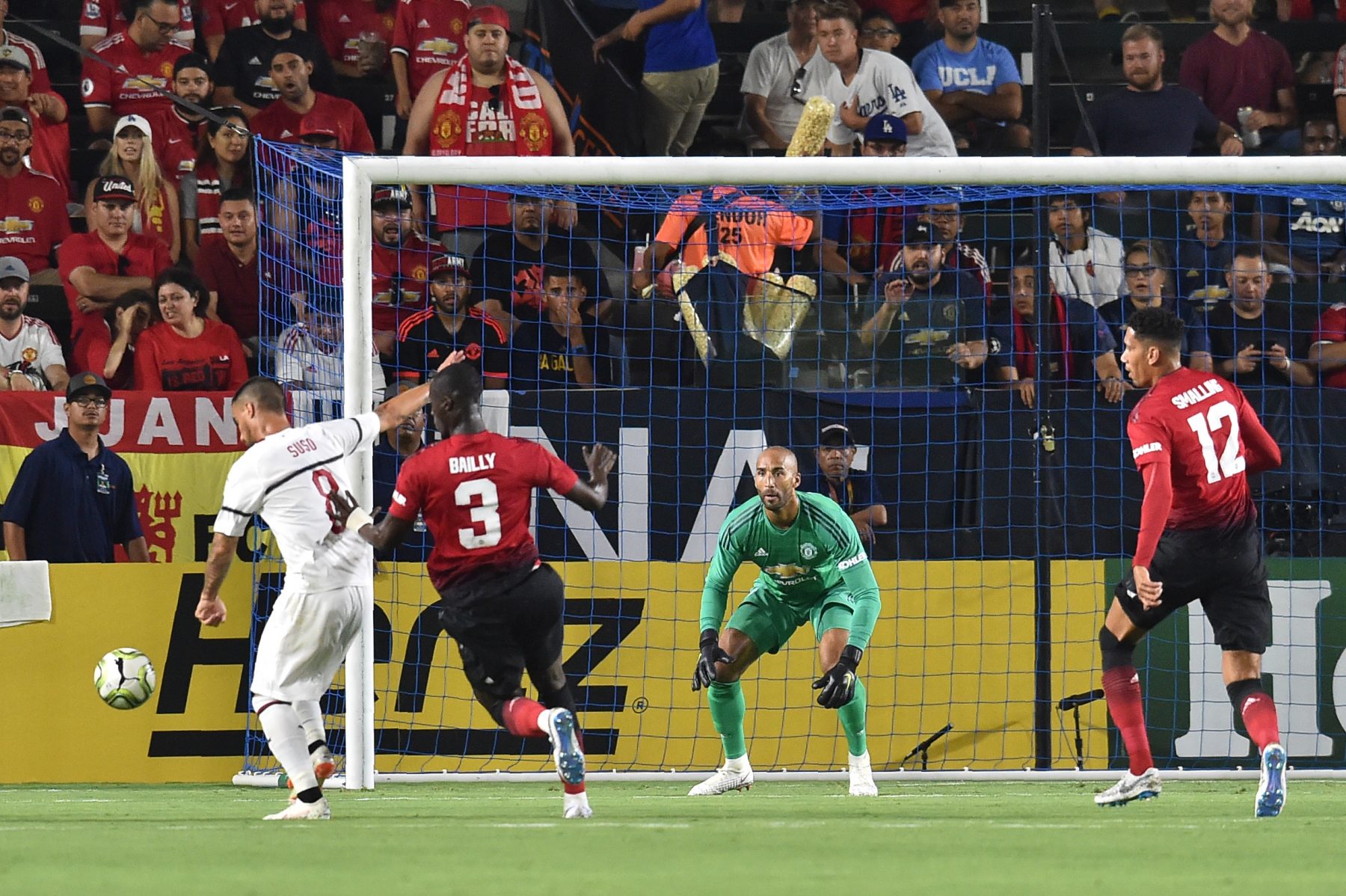 In the 22nd minute, Alexis Sanchez nearly caught Donnarumma too far off his line. The Chilean tried to curl the ball into the net from a corner kick but it just missed and went inches over the crossbar.

United had a great opportunity on a counter attack as Alexis Sanchez found Ander Herrera, who caused another great save from Donnarumma. The pressure didn’t end there for Milan; however, as from the next corner kick, Juan Mata tried his luck just like Sanchez earlier when he saw the Milan goalie off of his line again, but luckily for the Rossoneri he was also off target.

In the 30th minute, Milan had an opportunity to go ahead on a corner kick as Hakan Calhanoglu played a beautiful ball into the box where Mateo Musacchio headed it right towards Grant.

The teams took a water break in the 32nd minute due to the heat.

There were three minutes of stoppage time added on at the end of the first half. During which Calhanoglu earned a free kick in a decent area. Suso took the opportunity to try and test the goalkeeper, but missed the target completely. Milan had another decent opportunity right as the half was coming to an end as Cutrone found Kessie in the box one more time, but he fired the ball straight at Grant who forced it out of bounds. With that, the first half closed. 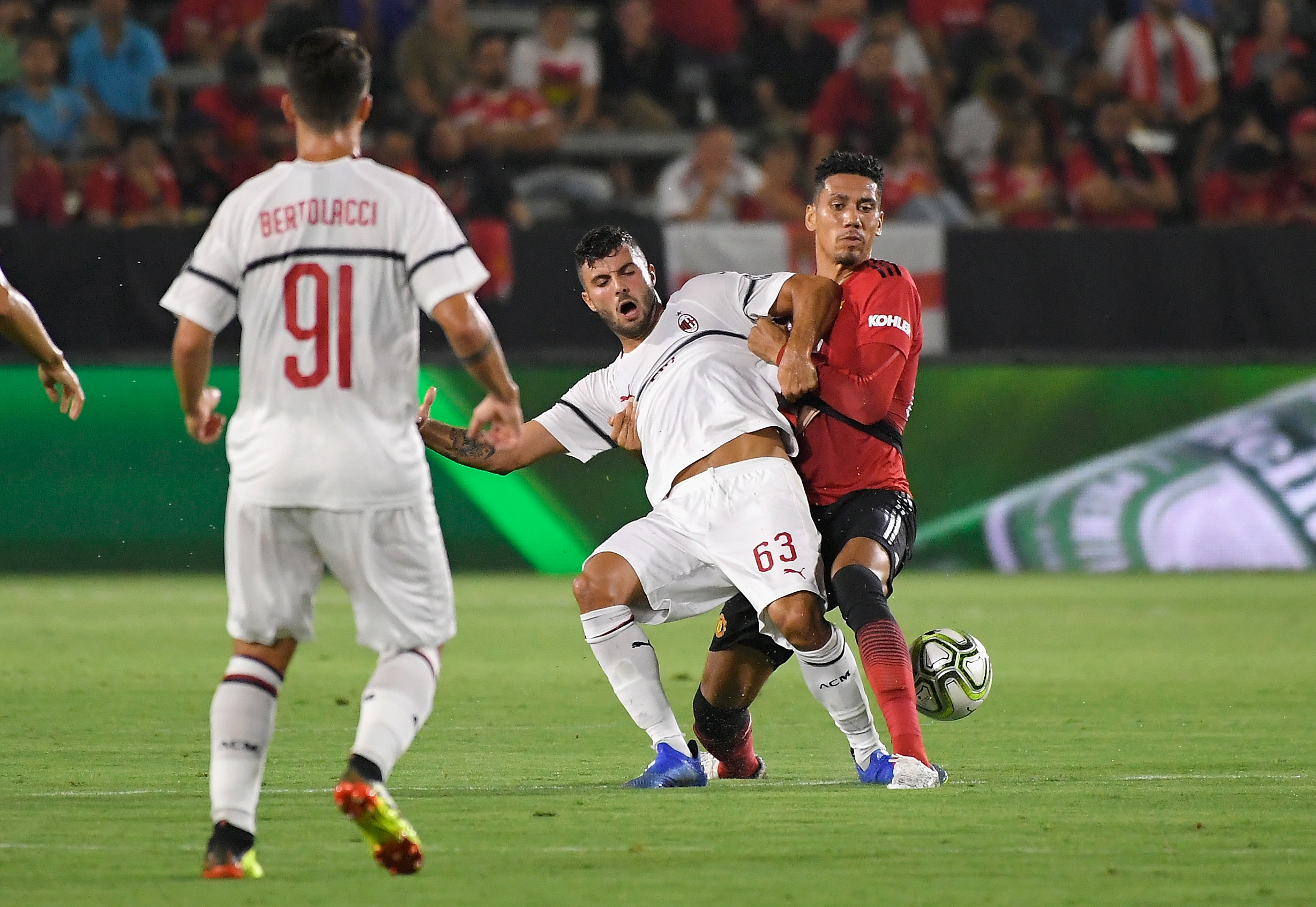 It was a solid first half for Milan as they dominated possession, 60-40%, but United had the more clear-cut opportunities.

The second half began with two changes for the Rossoneri as Andrea Bertolacci was taken off in favour of Fabio Borini, while captain Leonardo Bonucci was removed in favour of Alessio Romagnoli. United kept the same outfield players and only replaced goalie, Lee Grant with Joel Pereira.

Manchester United started on the front foot again as Sanchez sent a beautiful ball down the right side to Matteo Darmian, who crossed the ball back into the middle to find Sanchez again. The ex-Barcelona player almost scored with a brilliant kick, but the ball went just wide of the left post. 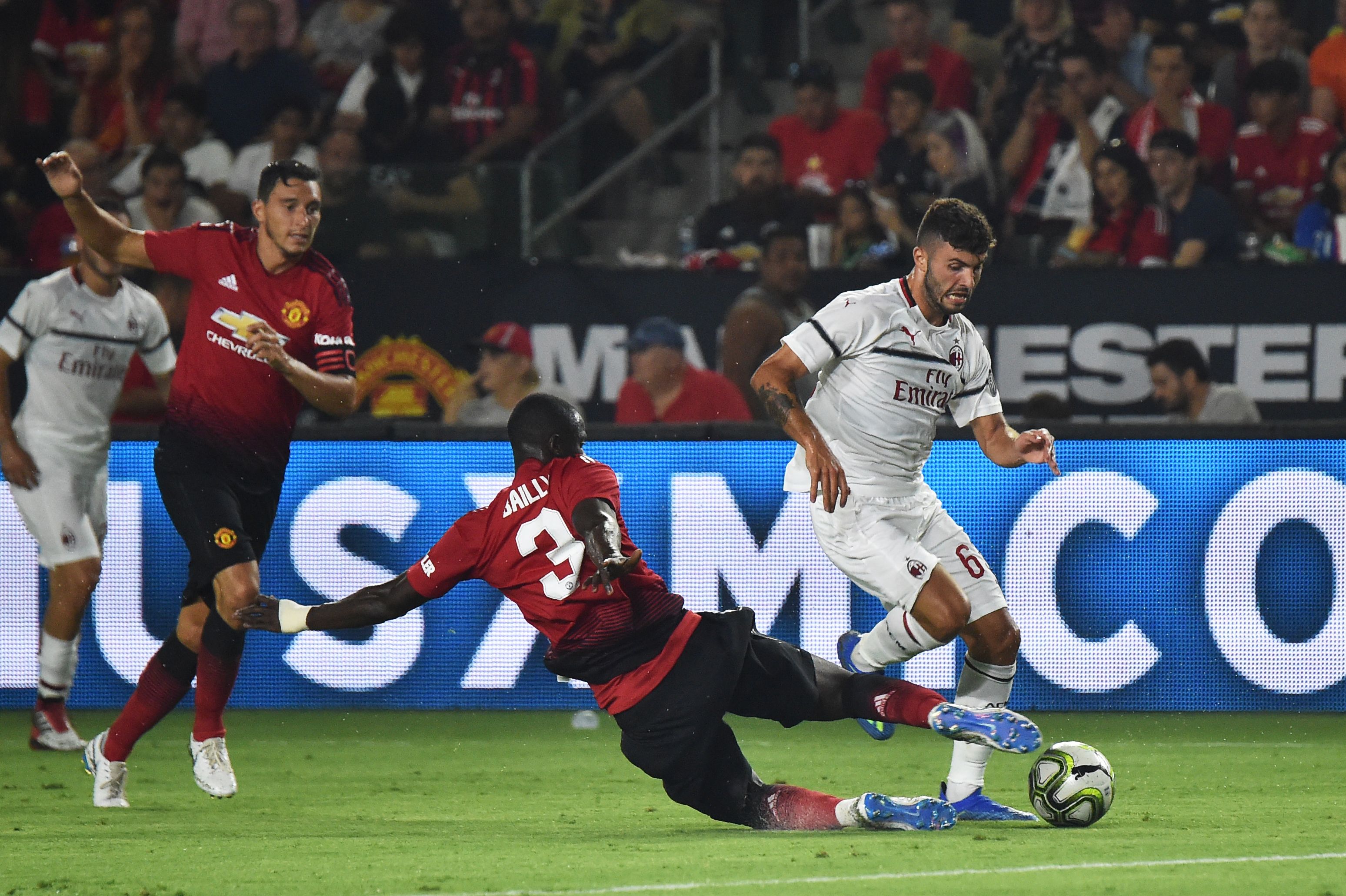 Milan had another opportunity to take the lead 55 minutes in, as Suso found himself on a two on two break with Cutrone. The Spaniard passed the ball to the young Italian, but he was unable to find the target.

In the 60th minute, Milan made more substitutions with Jose Mauri taking the place of Manuel Locatelli and Luca Antonelli coming in for Ignazio Abate. They also switched goalies as Donnarumma took a seat in favour of new signing Pepe Reina.

United wasted no time in testing Reina as Luke Shaw fired the ball towards the bottom right corner off of a corner kick; however, it wouldn’t have counted because the offsides flag was raised.

The Rossoneri threatened again in the 66th minute as Jose Mauri found Fabio Borini running down the middle, but the ex-Liverpool striker missed the target. 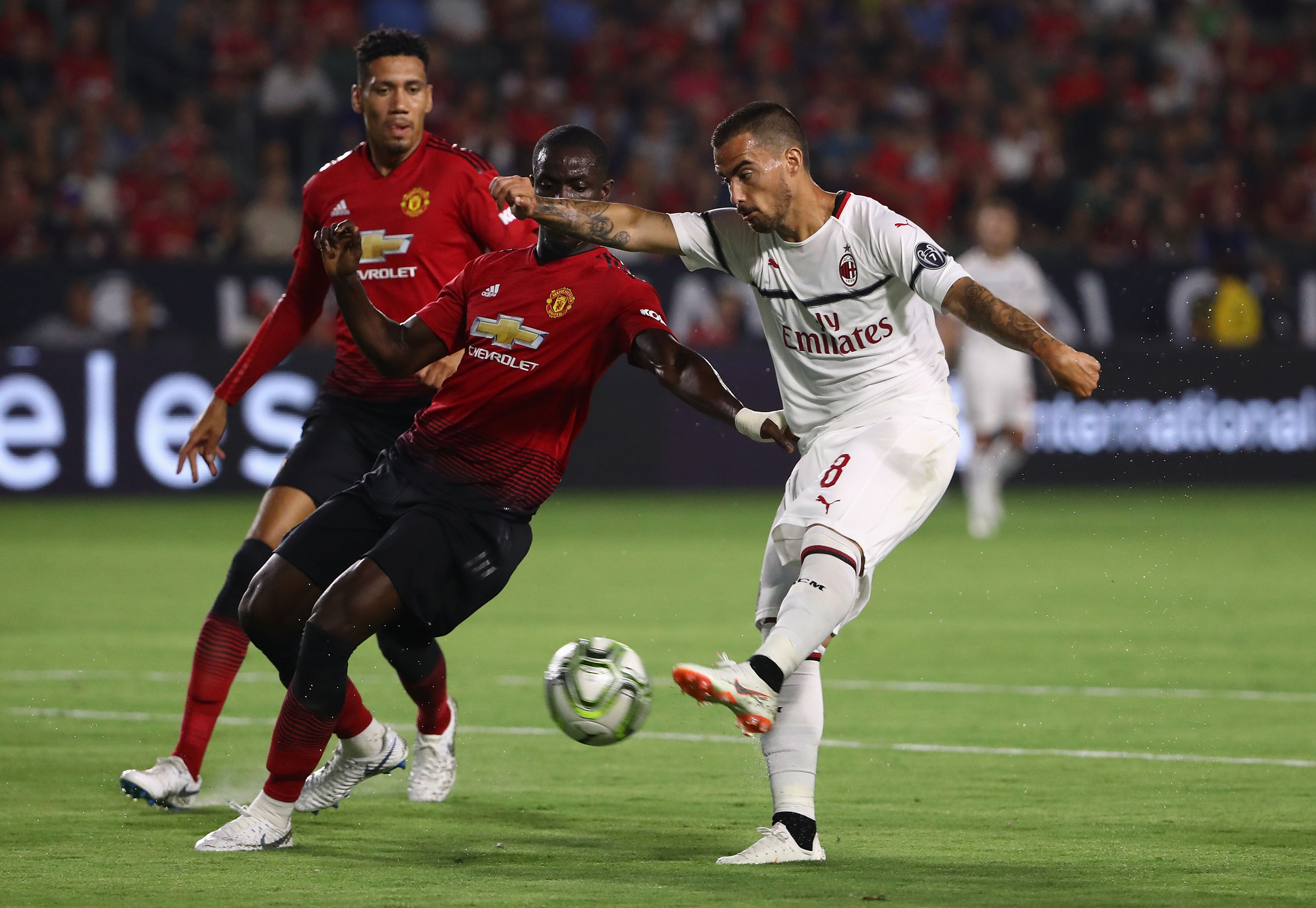 United were dangerous on the counter-attack once more as Herrera found Sanchez with a quick long ball down the field. Sanchez found Juan Mata in the centre of the penalty area but the Spaniard fired straight at Reina.

The teams then exchanged attacking opportunities over the next few minutes as space really began to open up on both ends.

In the 74th minute, both teams made changes. Manchester United replaced Luke Shaw with Timothy Fosu-Mensah and Milan sent Patrick Cutrone to the bench in order to give Nikola Kalinic a bit of run.

Borini thought he had the go-ahead goal, and likely match-winner, in the 84th minute when his shot beat the keeper but unfortunately went just wide and bounced off of the right post. 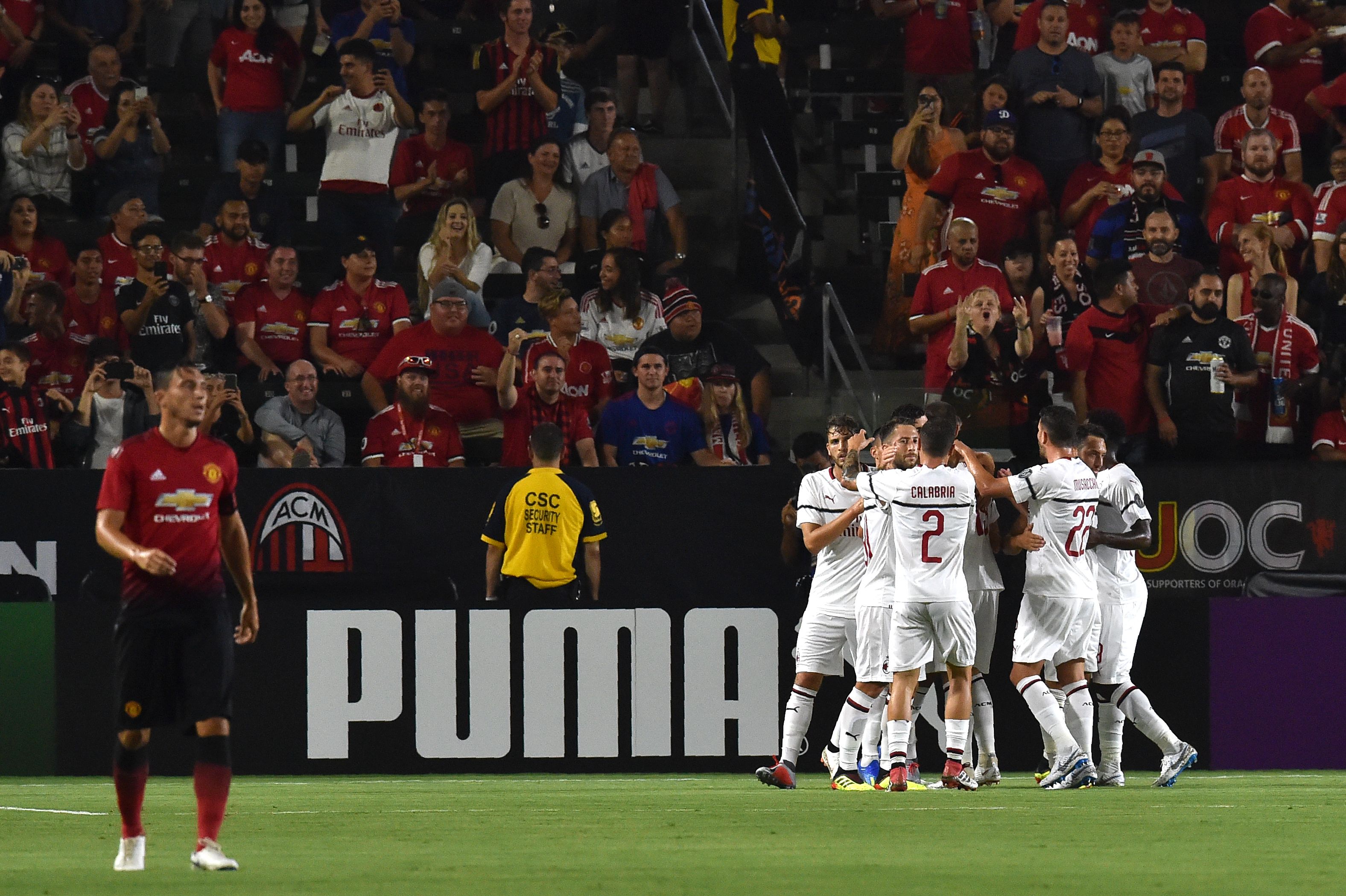 United made another change in the 88th minute, taking off Juan Mata and sending Ethan Hamilton onto the pitch for the last few minutes of the match.

The game ended in a 1-1 draw and therefore went straight into penalties in order to declare a winner, who would grab an extra point.

Andreas Pereira was the first to step up and he sent Reina the wrong way, giving United a 1-0 lead in the penalties.

Calhanoglu was the first Rossoneri player to attempt a penalty, and he put too much pace on the ball for Pereira to stop, evening the score.

Ander Herrera was next up for the Manchester club, and he beat Reina in the bottom left corner even though the Spaniard guessed correctly.

Next up for Milan was Borini and he sent the ball down the middle. It was ultimately blocked by Pereira with a kick save.

Alexis Sanchez stepped up and easily converted in the top left corner to give Manchester United a comfortable 3-1 lead in penalties.

Kessie stepped up to the spot with pressure on his shoulders and handled it brilliantly, closing the gap to 3-2.

McTominay was unable to beat Reina and Milan had renewed life; however, Suso then stepped up and was unable to take advantage, allowing United to hold their lead.

Pereira, the goalie, shockingly walked to the spot to take the fifth kick for Manchester United, and he proved that he was a goalie by missing.

Reina was next up as Gattuso also gave his goalie an opportunity, and he slotted it home very calmly and tied things back up at 5-5.

Things returned to normal as an outfield player, Bailly, stepped up to the spot and Reina was heroic once more as he stopped the penalty, giving Milan a chance to win.

Alessio Romagnoli stepped up and bounced the ball off the post, and the competition continued.

Smalling stepped up to regain the lead for United, and did just that, putting the pressure back onto Milan.

Davide Calabria needed to convert in order to keep things going, and he did with a brilliant shot into the top left corner.

Tuanzebe was next to step up in what seemed like a never-ending shootout, and he also picked out the top right corner in order to once again give United the lead.

Now it was Kalinic’s turn to keep things going, and the Croatian slid the ball into the bottom right corner.

Next up for Mourinho’s men was Fosu-Mensah and he converted in order to put the pressure back onto the Rossoneri. Mateo Musacchio stepped up for Milan and scored the perfect penalty right into the top corner, giving the goalie no chance.

Ethan Hamilton was next up, and unfortunately for the youngster, was the first person to miss in a while. Milan now had the opportunity, once again, to win the competition. This time, Jose Mauri had the game on his shoulders and was unable to convert, prolonging the competition once more.

Matteo Darmian took the eleventh penalty for United, and he stepped up and brilliantly sent it into the top left corner. Luca Antonelli was next up for Milan to keep it going, and was able to do so with a calm finish.

Things came full circle when Andreas Pereira stepped up again for United, and he converted once more. Calhanoglu stepped up for his second penalty as well and sent it where the goalie had no chance, and once again the penalties continued.

Herrera was the next person to take his second penalty, scoring again in order to give United the lead. Kessie was next to give it another go, and the Ivorian tried a chip shot but failed to get it on target, finally ending the match in favour of Manchester United, who claimed the extra point.