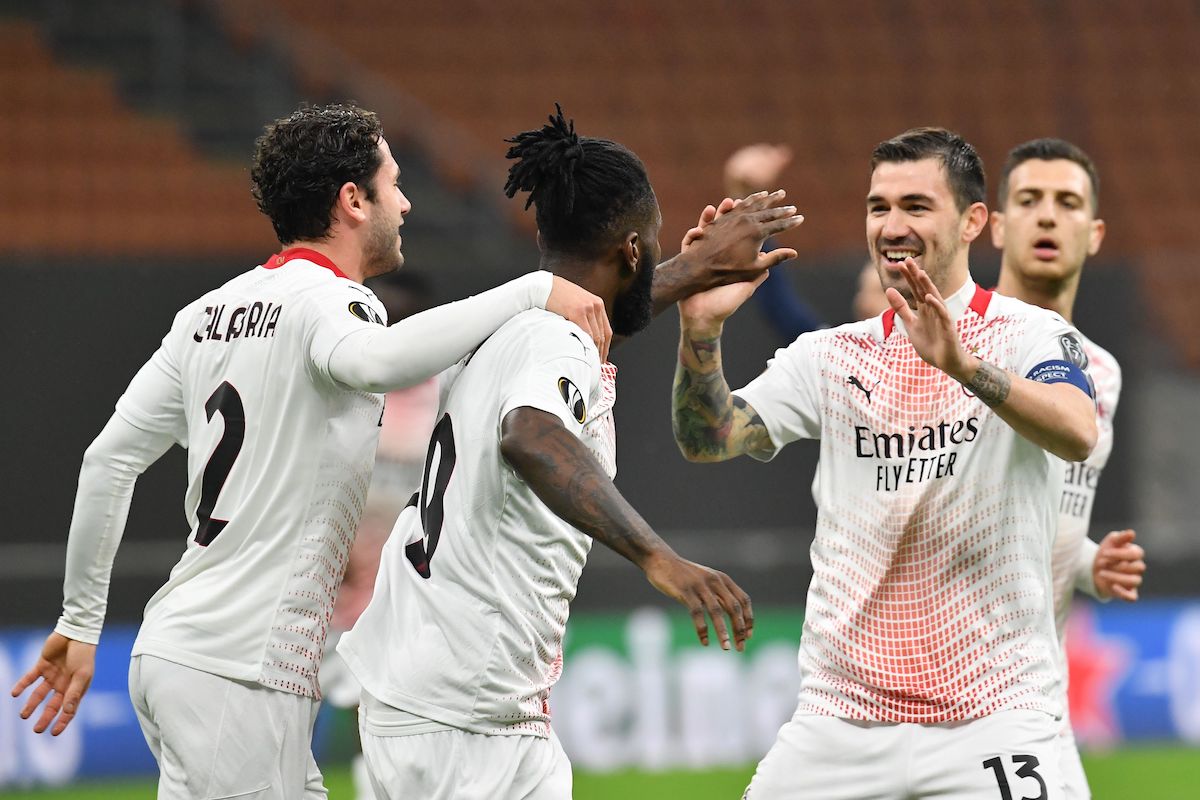 AC Milan booked their place in the last 16 of the Europa League by beating Red Star, but they had to rely on away goals in order to progress.

Having scored twice in Belgrade last week, the Rossoneri knew that they simply had to avoid defeat or a high-scoring draw against the Serbian league leaders in order to progress, and they battled to secure just that.

When Franck Kessie made it 1-0 to the hosts from the penalty spot inside the first 10 minutes it could have been presumed that it would be an easier night, but Ben Nabouhane took advantage of Alessio Romagnoli’s hesitancy to level.

Just as they did in the first leg, Red Star went down to 10 men as Gobeljic picked up a second yellow card, but ultimately there would be no further goals as Milan squeaked into the next round.

Head coach Stefano Pioli made a number of changes to his starting line-up from the defeat to Inter as Fikayo Tomori, Diogo Dalot, Soualiho Meite, Samu Castillejo, Rade Krunic and Rafael Leao came into the team.

It was an interesting early set-up from Milan as it didn’t look to be a typical 4-2-3-1 as we have seen but rather more of a 4-3-1-2 with Calhanoglu part of the midfield and Krunic further up, with Leao and Castillejo pressing as a two.

The Rossoneri were moving the ball around quickly and it earned them a penalty in the 8th minute with their first meaningful attack of the game. The ball was spread wide to the left edge of the box where a cut-back found Krunic, whose shot clearly struck the arm of Gobeljic’s as it was goal bound.

The referee went and consulted the VAR monitor before determining it was indeed a spot kick, and Kessie made no mistake from 12 yards, sending Borjan the wrong way with a composed finish.

Red Star thought that they had equalised when a corner was flicked on to the far post and eventually bundled in, but the referee blew for handball on Pankov prior to the finish and his decision was ultimately upheld.

Ben Nabouhane was inches away from levelling as he curled a free-kick from around 20 yards out towards the top left corner and with Donnarumma’s weight having been transferred the other way, he was motionless and grateful to see the ball clip the crossbar and go over.

However, there would be no denying him moments later as the 31-year-old drove into the box from the left side and with Romagnoli standing off, the Comorian beat Donnarumma with a precise low shot into the far corner.

Milan then went in search of getting back on top in the night, and a clever corner routine saw Calhanoglu fire a ball back into the danger area from the edge of the box, but Leao couldn’t get any power or real direction on his attempt and Borjan snuffed out the danger before Tomori could pounce from close range.

Dalot had a big chance to make it 2-1 to the Diavolo when a cross from the right side went all the way across the box and found the Portuguese full-back unmarked, however he somehow fired straight at Borjan with virtually the whole net to aim at.

Not long after, Calhanoglu forced the Red Star keeper into a fairly comfortable low save after letting fly from outside the box and trying to catch him out with a fizzing low near post shot.

Red Star – and more specifically Kanga – provided a reminder of the fact they were only a goal away from putting Milan in a very difficult position as he whizzed an effort wide of the top right corner from 30 yards with Donnarumma shouldering arms.

Eyebrows were raised when Pioli decided to make a double change at the break, clearly not happy with what he had seen in the opening 45 minutes, with Ante Rebic and Zlatan Ibrahimovic coming on for Leao and Krunic.

Milan hadn’t learned their lesson from the shot just before the break as Kanga again let fly from distance and this team got closer to netting absolute screamer, albeit narrowly missing with Donnarumma scrambling.

Ibrahimovic had a big chance to net with his first real dangerous touch seven minutes into the second half as Kessie return the ball to the Swede with a one-two inside the box but the striker curled his effort straight at the goalkeeper.

It really should have been 2-1 on the night with the next attack; this time the 39-year-old was unmarked in the box to head back across goal and fellow substitute Rebic somehow diverted his effort wide first time.

There was a sense of nervousness every time Red Star got men forward, and Donnarumma was happy to see Ivanic’s shot deflect wide of his far post after the forward’s marauding run.

Shortly after Kanga dragged another shot wide from 25 yards a double change followed again from Milan, with Calabria and Castillejo removed in place of Theo Hernandez – with Dalot shifting to right-back – and Alexis Saelemaekers respectively.

On his 22nd birthday Donnarumma might have been hoping for a quiet night, but he made an absolutely incredible reflex save to deny Sanogo from a few yards out with his momentum taking him the other way, and then Gobeljic fired the rebound over with a wild attempt. Things would go from bad to worse for the latter as he picked up a second yellow card moments later for going through the back of his man.

😍 What a save from the birthday boy.pic.twitter.com/twoagTW1VJ

Milan thought they had put the tie to bed when Ibrahimovic – unmarked at the far post – directed the ball back across goal for Saelemaekers to fire in from close range, but the offside flag had rightly gone up as the 39-year-old was offside.

With eight minutes left on the clock Red Star had a great opportunity to put one foot in the next round as Katai had only Donnarumma to beat but somehow missed the target altogether.

The final big chance of the game came when Rebic should have cut back to Ibrahimovic for an easy goal to kill the tie but the Crotian saw his shot blocked wide, but that would be it as Milan went through.