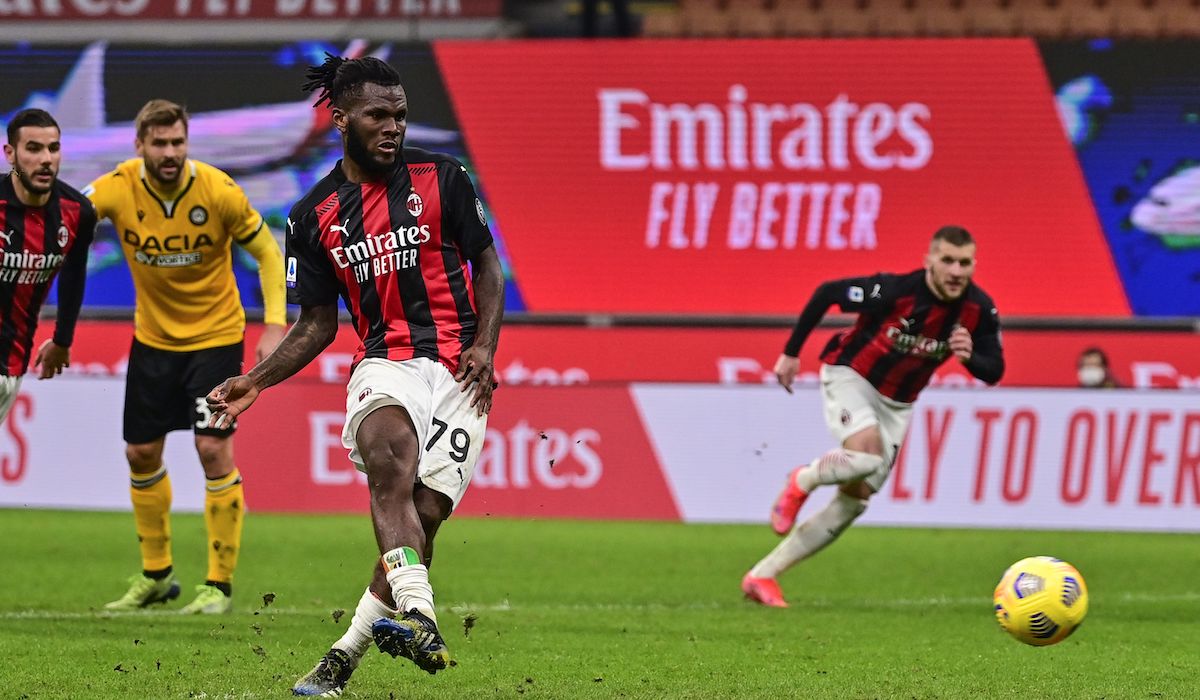 AC Milan suffered a blow to their title hopes as they were held to a 1-1 draw by Udinese at San Siro on Wednesday night.

It was yet another disappointing home performance in which the Rossoneri struggled to break down a three-man defence, with the absences of key players felt. It would be Rodrigo Becao’s second half header that looking like earning all three points for the away side in what was deja vu for Milan, given he scored the winner on the opening day back in 2019-20 in what was also a 1-0 scoreline.

However, a late penalty allowed Franck Kessie to level from the spot and rescue a point for Milan. The result somewhat undoes all the good work from Sunday’s 2-1 victory over Roma, with a difficult trip to face Hellas Verona on the cards this Sunday.

Pioli made five changes from the team that beat Roma with two of them forced as Hakan Calhanoglu and Zlatan Ibrahimovic sustained muscle problems. Brahim Diaz and Rafael Leao came in for those two, while Pierre Kalulu, Alessio Romagnoli and Samu Castillejo also started.

Milan started the game on the front foot and won a corner inside the first minute, but there was a worrying sign as Simon Kjaer went down in a heap as the ball came in with the Dane clutching his knee. He would, however, be ok to continue.

The theme of the early stages was very much as was to be expected, with Udinese sitting deep and compact in their 3-5-2 and challenging Milan to break them down, with a few corners the best that the Rossoneri could muster without really testing Musso.

The home side had a half shout for a spot kick in the 18th minute as Kessie was hauled to the ground attempting to latch onto a loose ball that was running towards the byline, but the referee Massa waved away the appeals.

Moments later Musso was called into action for the first time as Brahim was awarded some space on the edge of the 18-yard box to let fly, though the Spaniard rather telegraphed his effort towards the far post and it was a routine grab in the end.

The game was not short of intensity despite the rinse-and-repeat nature of Milan spraying the ball out wide and realise that Ibrahimovic would not be in the end of their crosses, while Theo Hernandez went into the book for an enthusiastic jumping tackle just after the half hour mark.

Seven minutes before the interval a free-kick from Sandro Tonali on the right flank caused panic inside the Udinese box, with the ball ricocheting around before Leao sent a weak overhead kick straight into the arms of Musso from a few yards out.

Milan began to turn the screw before the break, and had Castillejo not being falling over having bundled past three defenders he might have had a better chance of beating the Udinese stopper, who instead saved with his legs.

There was yet more injury concern for Pioli to deal with as Tonali went off during the interval, replaced by Soualiho Meite.

The away side had an absolutely huge chance to take the lead in the opening minutes of the second half when Theo Hernandez’s back-pass was cut off by Pereyra and he crossed for Nestorovski who had a full net to aim at, but Romagnoli saved a certain goal with a clearance on the line.

At the other end, Musso made an incredible save to deny Milan taking the lead when Meite’s sweeping shot from 25 yards out was magnificently palmed over the bar.

Just before the game paused in the 59th minute so the teams could pay tribute to Davide Astori – who died on this day three years ago – Castillejo forced Musso into a save at full stretch and the Argentine did well to gather his rebound.

Decision making was far from Milan’s strength in the opening hour, and just after it Theo arguably could have done better as he led a counter but rather than cutting back to the edge of the box where there were bodies waiting, he chose to take on one more man and was tackled.

A double substitution followed as Jens Petter Hauge and Davide Calabria came on for Brahim and Kalulu.

Kjaer made a vital intervention to deny an easy tap in, but moments later Udinese took the lead as Becao’s header from the resulting corner somehow made its way through the legs of Donnarumma. There were appeals for a free kick after the goal went in for an infringement in the box, but they were waved away and the goal stood.

Alexis Saelemaekers then followed as the next substitution, coming on in place of Samu Castillejo.

As expected, Udinese were piling bodies behind the ball and trying to make things as hard as possible for Milan to break through, and two heroic blocks denied Calabria on the edge of the six-yard box before the corner was wasted.

Just as it looked like the game was over, Milan were awarded a penalty in the fifth minute of added time as Larsen clearly handled the ball inside the box. Kessie took on the responsibility, and scored his ninth goal of the season with virtually the last kick of the game to earn a point.