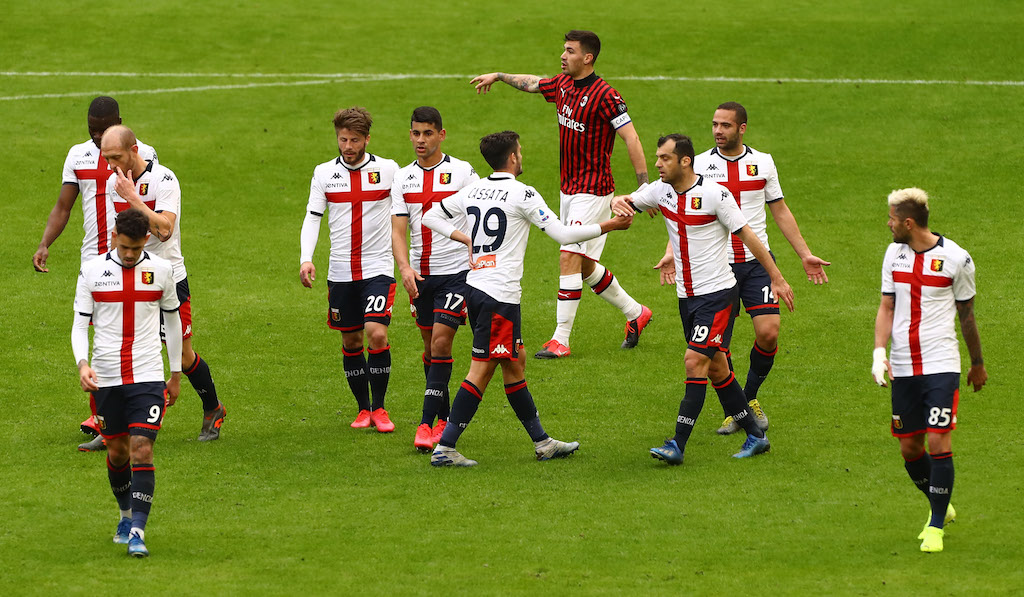 AC Milan 1-2 Genoa: Two first half strikes down the Rossoneri in front of empty San Siro

AC Milan’s European hopes were dealt a big blow at San Siro on Sunday afternoon as they were beaten 2-1 by relegation battlers Genoa.

Zlatan Ibrahimovic’s late strike gave Milan hope of salvaging a point, but ultimately nothing was created from there as the team limped to just their second defeat of the calendar year.

The Rossoneri made a bright start to the game and caused the away side panic inside the opening five minutes when a cross from Samu Castillejo caused havoc, with the ball eventually being turned wide by Theo Hernandez.

However, it was the away side who got on the scoresheet not long after as Sanabria’s marauding run down the right side was rewarded, with Goran Pandev turning the ball in from close range.

Pandev continued to cause problems and he managed to get a shot away in the 14th minute that hit the side netting from a narrow angle.

Milan had two chances in quick succession to level the game, the first one coming when a cross bounced through to Zlatan Ibrahimovic, who headed straight at the keeper unmarked from close range when he really should have scored.

The second chance was created by the Swede; his flicked through ball finding Hakan Calhanoglu in behind who fired straight at Mattia Perin.

Stefano Pioli’s side then went on the front foot again, with Theo Hernandez and Ibrahimovic each firing wide from the edge of the box in quick succession.

Despite this, the Grifone doubled their advantage four minutes before the break as Cassata tapped home from close range; Lasse Schone having provided an expert delivery from the right.

Ten minutes into the second half Pioli made his first changes, as Calhanoglu came off in place of Giacomo Bonaventura and Rafael Leao came on for Ante Rebic.

The Rossoneri struggled to create opportunities in what began to feel increasingly like a preseason game; the first chance after the hour mark coming when Bonaventura dragged his shot wide from the edge of the area.

Milan managed to get themselves back into the game inside the final 20 minutes though, with Ibrahimovic firing home from close range after Calhanoglu’s attempt had been blocked on the edge of the six yard box.

The third substitution came inside the five minutes of added time as Davide Calabria came on for Andrea Conti, and that would prove to be the latest notable moment of the game as Genoa managed to get themselves over the line.