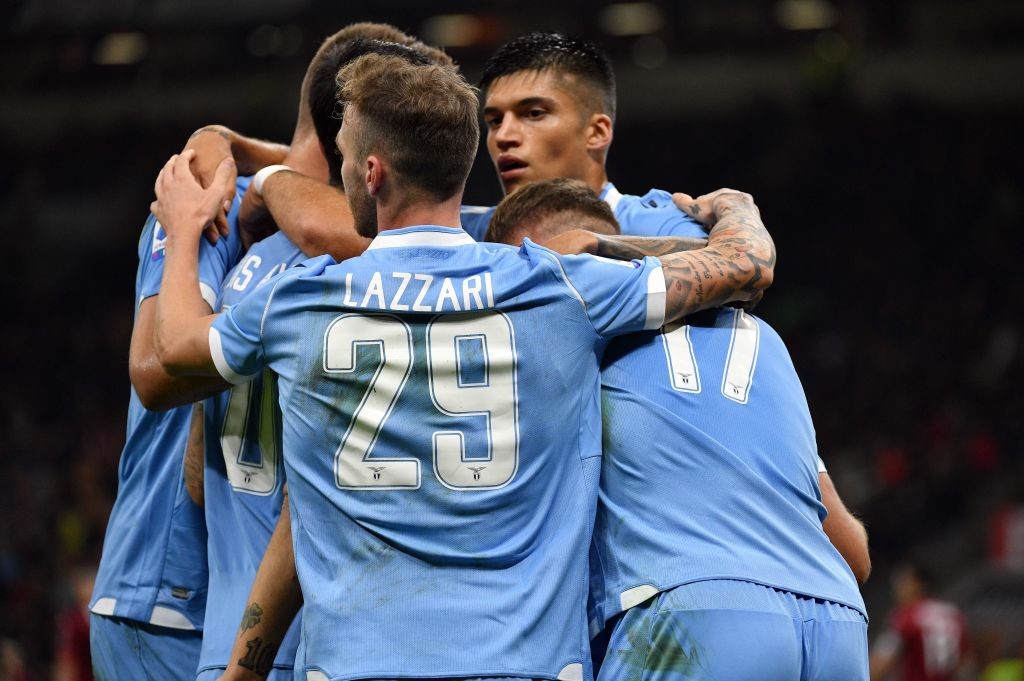 AC Milan were condemned to their sixth defeat of the season as they were beaten 2-1 by Lazio at San Siro on Sunday night.

Ciro Immobile netted the opener for the away side with a trademark header to rack up his 100th goal for Lazio, but the Rossoneri levelled as Theo Hernandez’s cross was deflected in by Bastos with Krzysztof Piatek lurking.

However, in a similar fashion to the Coppa Italia game back in April, Lazio broke and Joaquin Correa found himself in behind, finishing past a helpless Gianluigi Donnarumma to snatch all three points.

The result opens the gap between the two sides up to eight points and is the Biancocelesti’s first win over Milan in the league away from home for 30 years, leaving Stefano Pioli’s side in the bottom half once again.

Milan started the game on the front foot with some good passing football, and a teasing free-kick just four minutes in was well turned behind as the Rossoneri threatened for the first time.

Moments later though Gianluigi Donnarumma was called into action as he saved a low shot from Ciro Immobile after Lucas Paqueta had given the ball away.

Krzysztof Piatek was put in behind by Samu Castillejo from a Thomas Strakosha giveaway shortly after as the end-to-end start continued. However, the Poland international saw his shot from a narrow angle blocked behind for a corner.

Hakan Calhanoglu was presented with an opportunity to break the deadlock from a free-kick 25 yards out, but the midfielder whipped his effort wide of the far post.

Milan had a great chance to open the scoring in the 21st minute when a lovely bit of link-up play saw Paqueta receive the ball in space inside the box, though the Brazilian tried to place his effort and gave Strakosha an easy save.

Up the other end Lazio then almost took the lead when Immobile found himself the wrong side of Calabria again; the striker skimming the bar with his effort.

A frantic couple of minutes continued as up the other end Castillejo ran into space on the break, drawing a good low save from Strakosha from a fierce 20-yard strike.

Immobile would not be denied in the 25th minute as Milan were caught without men back on the left side and Lazzari delivered a pinpoint cross for the Italy international who finished from close range with a glancing header.

Their lead would last just three minutes though as Pioli’s side found a quick leveller. Hernandez crossed from the left towards Piatek, and the ball was diverted past Strakosha at the near post off Bastos.

Milan’s injury woes would continue as Castillejo was forced off just after the half hour mark with a muscular issue – Ante Rebic coming on to replace him. It was a sad moment for the Spaniard who had been bright up until that moment, and he left the field in tears but under his own strength.

Rebic almost made an instant impact as Bennacer found him with a cross from the byline, however the Croatia international placed his header just wide of the left post.

Donnarumma was called into action seven minutes before the break as Joaquin Correa was played through by Immobile. The 20-year-old saved well, though the offside flag was up.

Strakosha was then made to work at the other end as Calhanoglu almost scored directly from a corner.

The second half began in the same wide open manner that the first half ended but both sides were sloppy in possession, and eight minutes in Rafael Leao came on for Paqueta.

Leao almost made an instant impact as he was fed by Calhanoglu on the counter-attack, but the Portuguese starlet didn’t take the ball cleanly and couldn’t get his shot away.

Just before the hour mark Calhanoglu was involved again when the Turkey international found Romagnoli at the near post, though he flicked his head onto the roof of the net.

Piatek once again had the chance to work the goalkeeper from a narrow angle as he took the ball from Leao but fired into the side netting.

Lazio had appeals for a penalty waived away in the 62nd minute as Lazzari went down on the edge of the box claiming contact from Hernandez, though the replay showed that the referee was correct not to give it.

Up the other end Calhanoglu was brought down on the break and was allowed to take the free-kick 30 yards out, testing Strakosha with a driven effort that he parried to safety.

Donnarumma had to be alert as – with 15 minutes left – Luis Alberto fired a low shot towards his near post that was cleared for a corner.

The 6ft5 keeper then came rushing out to try and catch the resulting corner but missed the ball, though he recovered well to save Acerbi’s follow-up effort.

Eight minutes from time though Donnarumma would be beaten as Correa was put through on goal; the Argentine finishing emphatically to give Lazio a late lead.

Giacomo Bonaventura came on for Krunic after the goal as Pioli tried to rescue a point from the game.