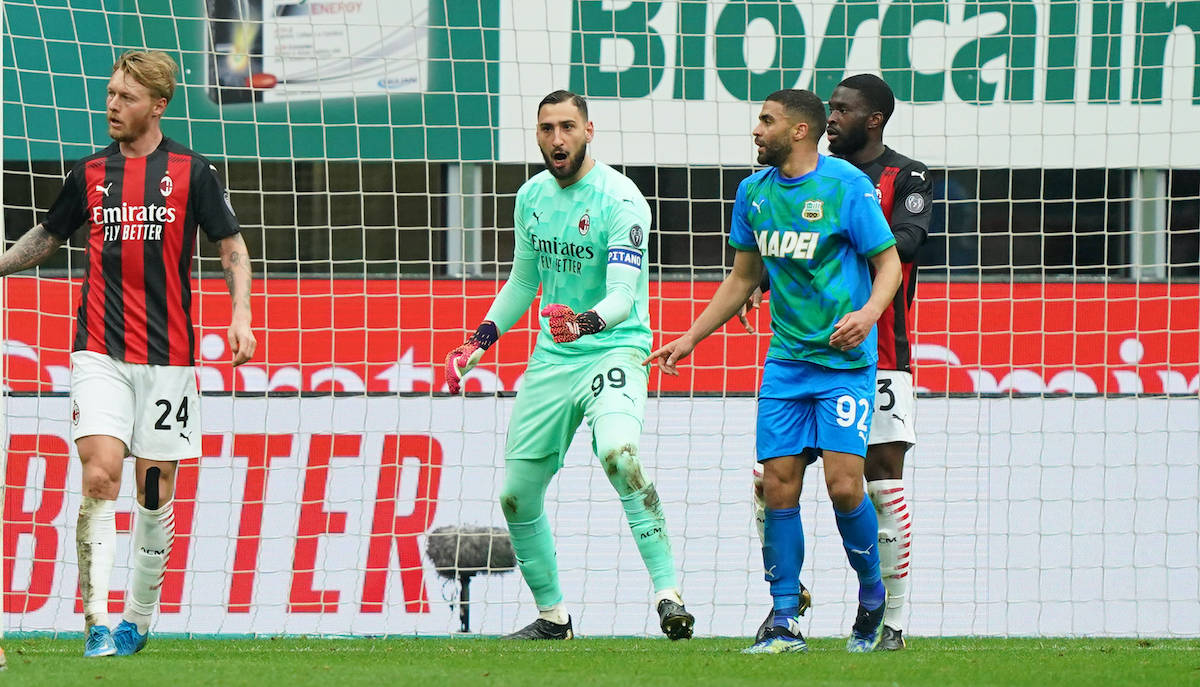 AC Milan suffered a damaging blow to their top four hopes as they surrendered a lead against Sassuolo to lose 2-1 at San Siro.

It looked like being a positive night for Milan when Hakan Calhanoglu curled in a wonderful strike in the first half to give the hosts a lead that their early pressure had deserved.

However, it all fell apart in the last 20 minutes for Stefano Pioli’s men as their defensive stability completely evaporated. The substitute Raspadori was the man who turned the game on its head, equalising with a stabbed finish from close range and then firing in off the far post not long after to make it 2-1.

It was a disastrous second half from Milan who couldn’t rescue a result, and have put their top four hopes in serious jeopardy with some difficult fixtures to come.

Pioli was forced into some changes to his starting line-up from the team that scraped past Genoa on Sunday, with Zlatan Ibrahimovic, Ismael Bennacer and Theo Hernandez all missing out due to injury. Diogo Dalot came in at left-back while Davide Calabria returned on the opposite flank, and Soualiho Meite slotted into the midfield.

Milan started brightly and almost cut the visitors open inside four minutes. Having played their way through the thirds nicely, a neat exchange between Calhanoglu and Rebic on the edge of the box saw the former find space to shoot, but it was well blocked.

Less than a minute later the Turkey international tested Consigli for the first time. Again it was a driving run straight down the middle that troubled the Neroverdi, with Saelemaekers feeding Calhanoglu who dribbled and fired a tame effort at the keeper when he should have done better.

Leao looked lively during the opening exchanges and nearly barrelled his way through on goal after a flick from Rebic but his final touch let him down as he poked the ball into Consigli’s hands, though replays showed Rebic was offside anyway.

Dalot was the next to test the visiting goalkeeper as he cut in from the left flank and let fly from the edge of the box most likely looking for a finish like the one against Hellas Verona, yet this time his attempt was weak, low and easily saved.

The chaotic start continued as Sassuolo had a big chance to take the lead in the 13th minute through Boga. Milan were sloppy in clearing the danger and the Ivorian winger latched onto the ball on the left edge of the box, though Donnarumma produced a low reaction save to thwart him.

The away side had a chance to open the scoring when Berardi won a free-kick in his trademark position around 20 yards out and just to the right, but the Italy international couldn’t get enough dip on his curling effort as it sailed over.

There was some almost telepathic understanding on display between Dalot and his compatriot Leao when the latter was found in behind by an excellent pass, however Sassuolo centre-back Kyriakopoulos slid at the last minute and blocked superbly.

Calhanoglu produced a moment of brilliance right on the half hour mark to open the scoring. A raking ball across to the other side of the box from Saelemaekers was trapped perfectly by the former Leverkusen man, who cut in onto his right foot and curled a gorgeous finish into the far right corner that wrapped around the net.

The last action of the first half saw Dalot produce a superb block to deny Berardi who was arriving in space at the far post looking to curl in a first time shot.

Milan really should have doubled their advantage two minutes into the second half when Calhanoglu found an onrushing Leao who seemed to have the easy task of putting Rebic through, though his pass was poorly timed and weak, squandering the chance.

The visiting side could have given Milan deja vu after they conceded an equaliser from a corner to Genoa on Sunday when a delivery was whipped in from the left flank and glanced wide by Ferraris much to the relief of Donnarumma and the defence.

Consigli was called into making a save moments later when the ball sat up nicely for Saelemaekers to fire towards the far corner from just outside the box. The veteran stopper, however, was equal to it.

Milan continued pushing for that second goal that would give them some much-needed breathing room, and Consigli again came up with a smart stretching save to deny a Rebic shot from a similar location to the Saelemaekers chance previously.

A triple sub followed from De Zerbi as Đuričić, Müldür and Defrel made way for Traore, Toljan and Raspadori. Traore reminded Milan of the threat the Neroverdi pose moments after coming on when he sliced an attempt wide that he should have done better with.

Milan’s first change came with 17 minutes left and it was a double substitution as Mario Mandzukic and Rade Krunic came on for Calhanoglu and Leao.

Inside the final quarter hour, the Rossoneri were made to pay for their missed chances as Sassuolo levelled it. In truth it was a fantastic piece of work from Raspadori, who did well to turn and fire the ball wide to Toljan on the right before firing his feed past Donnarumma from around the penalty spot.

Minutes later, Sassuolo took the lead. It was poor all round from Milan as Kjaer gave the ball away cheaply in midfield allowing Raspadori to once again turn into a dangerous position, and this time he beat Tomori comfortably before drilling a low shot in off the far post with Donnarumma stood still.

Sassuolo squandered a big chance to make it 3-1 as Donnarumma produced a desperate save and a triple sub came for Milan as Kalulu, Brahim Diaz and Castillejo came on with Calabria, Saelemaekers and Meite making way.

In the end there would be no fightback as Milan were unable to rescue even a point, suffering a huge dent to their Champions League hopes.