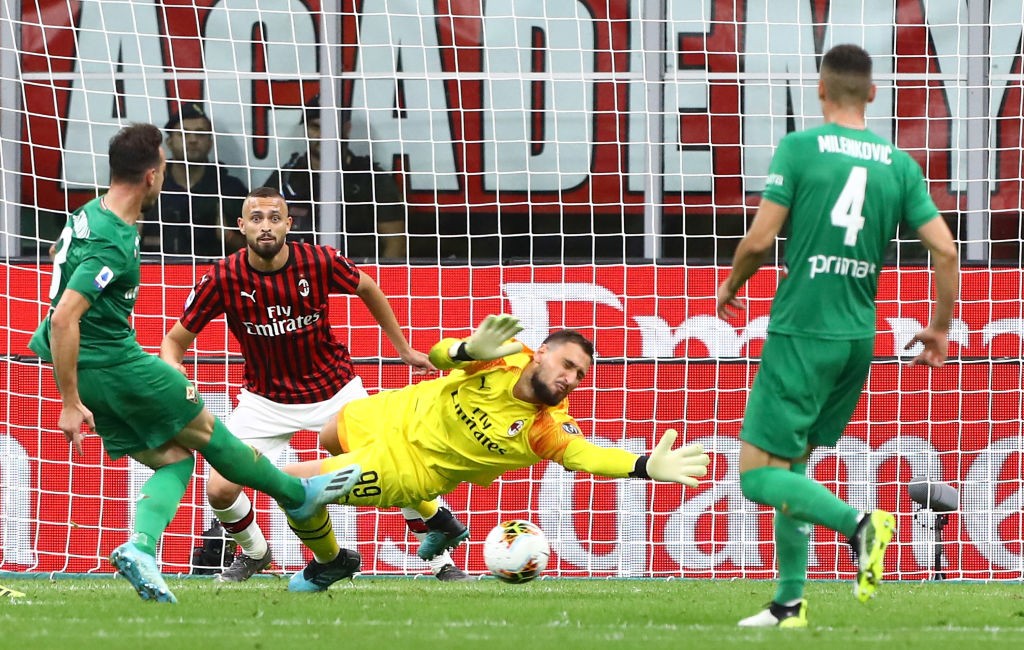 AC Milan’s season took another sour turn on Sunday as they were dismantled 3-1 by Fiorentina on a disastrous night at San Siro.

The away side got their first goal early on as Erick Pulgar converted a penalty, while Mateo Musacchio’s red card made it an uphill battle for Milan.

A second came from Gaetano Castrovilli and – in the middle of protests from home fans – Franck Ribery rubbed salt into the wounds with a third.

Rafael Leao did net a consolation for Marco Giampaolo’s side, but in the presence of owner Paul Singer it was another rudderless performance that leaves the team one point off the relegation zone.

The Rossoneri started the first few minutes on top with an intense pressing game, and Franck Kessie almost found himself through on goal two minutes in but for a vital late challenge from German Pezzella.

Fiorentina grew into the game from there though, and Gianluigi Donnarumma was forced into a smart low save in the 11th minute to deny a Federico Chiesa shot.

Moments later they were awarded a spot kick as Chiesa was chopped down by Ismael Bennacer, and Pulgar slotted away the penalty with confidence.

Fiorentina goalkeeper Bartłomiej Dragowski was forced into a spectacular save to deny Suso at full stretch int he 24th minute as Giampaolo’s side looked for a response.

La Viola thought they had doubled their lead when Chiesa’s pull back was thundered in off the bar by Castrovilli, however the whistle had already been correctly blown for offside in the build up.

Milan continued to battle hard and have a lot of the ball in midfield but struggled to carve their visitors open, with Dragowski having just a 25-yard Calhanoglu strike to save before half time.

Giampaolo made a change at half time as Kessie was replaced by Rade Krunic; the Bosnia international making his first appearance for the club in the process.

Eight minutes into the second half Musacchio was sent off for a nasty foul on Ribery. A yellow card was originally given but upon replay it was deemed that the Argentine had gone in studs up, and a red was then awarded.

That then forced the coach into another change as Krzysztof Piatek, who was largely ineffectual, was withdrawn in place of Leo Duarte – also making his debut.

Donnarumma was forced into a save moments later from goalscorer Pulgar’s swerving strike from distance.

Castrovilli would get on the scoresheet 25 minutes from time as a low cross was parried into his path, providing the 22-year-old with an easy finish to put the game beyond Milan.

Things went from bad to worse as Bennacer then conceded another penalty for a foul on Castrovilli, however Donnarumma responded by saving the penalty to stop the bleeding slightly.

With 12 minutes left on the clock they did get a third though as Ribery found space and time inside the box to send Donnarumma the wrong way.

The San Siro emptied, with the Curva Sud removing their banners and chanting: “This club does not deserve us.”

There was one piece of positivity not long later though as Leao scored a fantastic consolation goal. The Portugal international weaved around two defenders inside the box before shifting onto his right foot and finishing expertly for his first ever goal for the club.