Milan hosted Juventus on Wednesday evening in a crucial game for both teams as a win for the Rossoneri would have put them four points clear at the top. However, due to a lot of absentees, Juventus managed to ruin Stefano Pioli’s night as they grabbed all three points.

The game was a weird one to say the least as both teams had two players absent because of COVID-19. On top of that the Rossoneri were still missing Ibrahimovic, Bennacer, Saelemaekers and Tonali for the game. Right off the bat it was going to be rough game facing an in-form Juventus and an in-form Cristiano Ronaldo.

The problems however came from Federico Chiesa and not Ronaldo, with the Italian managing to win the battle with Theo Hernandez and ended up scoring a brace to give his side all three points.

Milan reacted well after falling behind in the first half and equalised through Calabria, but were not clinical enough in the second half and allowed Juventus to score twice.

Pioli had a lot of selection problems ahead of the game and while many would say that Milan were lacking Zlatan’s presence up front and Bennacer in the midfield, it is now as important for the management to address the right wing position where Castillejo once again failed to make an impact.

The team created a lot of chances and lacked the Swede’s clinical finishing at times. While Bennacer is crucial for his team, Calabria surprised everyone and did really good in the midfield proving that even with so many absentees Pioli has the option to rotate. With Hauge and Castillejo failing to provide the impact that Chiesa had for example, Milan ultimately didn’t have the answer to Juve’s defence. 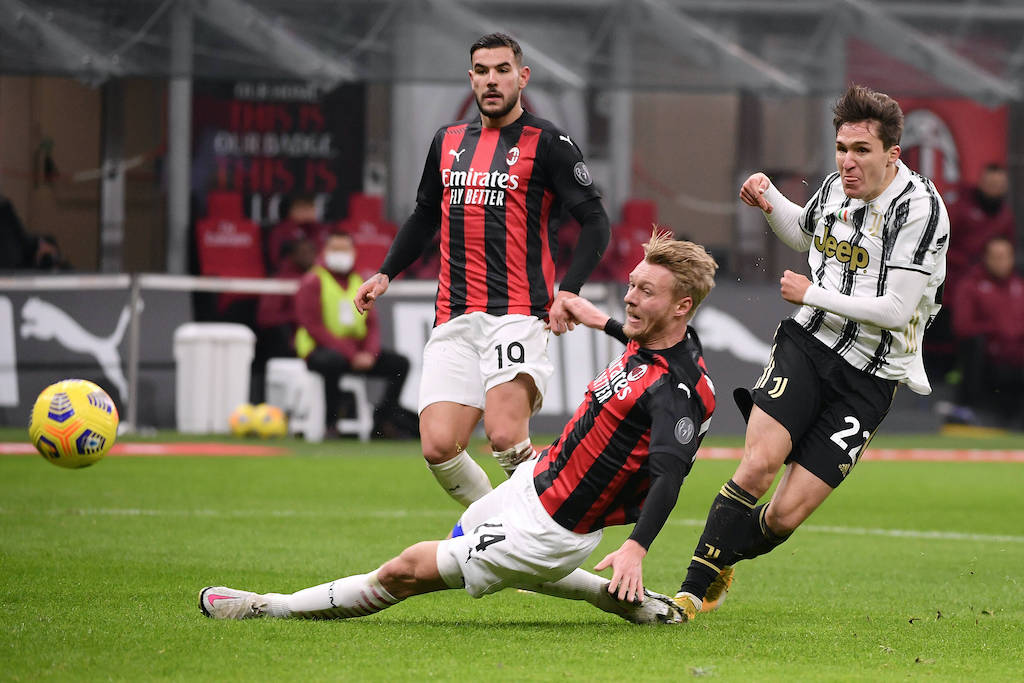 Dalot on the right, even though not contributing much in attack, did a good defensive job, while Theo Hernandez had a surprisingly bad game on the left allowing Chiesa to have plenty of space and score a brace.

The point is that the management needs to work on the striker and right wing position as the game against Juve could have gone the same way the 3-3 draw against Roma went had the team finished the chances they created.

2. A symbol of resurgence

It has been an outstanding year for Davide Calabria. The Italian has always shown glimpses of his talent, but had a rough time last season. He was good in Gattuso’s side but then had a bad run of form and was behind Conti in the pecking order last season.

The problem with Calabria in the past was he was error-prone and a lot of those ended up leading to the opposition scoring, and even if he played well that ultimately got to his confidence.

He had a rough time gaining experience and eliminating these small mistakes from his game and has been since growing with every game since post-lockdown. His technique on the ball is not to be underestimated, as we saw have he handled playing in the middle against a top side.

While he is often overlooked because of the wonders Theo has been doing on the left, Calabria is surely growing into one of Milan’s pillars and has a bright future ahead if he continues like this because he is just 24.

3. One to forget for Theo

It was a rare game in which Theo Hernandez was not at his very best. The Frenchman wasn’t as big of a threat going forward as we are used to seeing, but he also got it all wrong in defence as well.

His marking let him down on the first goal as he was slow to keep up with Chiesa and allowed the Italian to open the scoring. It was similar on the second goal as he allowed Federico too much space and the winger did no mistake in doubling his tally.

Hopefully, Theo will bounce back on the weekend and leave this performance behind him, but in order to be considered elite you must show up in the biggest games.

4. Solid from the Viking

Getting positives out of a loss is somewhat hard, but considering the circumstances Milan did quite well to react and fight until the end. Having said that, one man in particular did a fascinating job at keeping Ronaldo quiet and that man was Simon Kjaer.

The Dane is back from injury and managed to limit the threat of Ronaldo to a minimum proving just how good he really is. Unfortunately for him, his teammates had a rough night this time around and it didn’t go Milan’s way.

Kjaer, however, barely made a mistake and will be key for Milan’s upcoming fixtures in all three competitions.

Pioli was missing a lot of players and fielded a very young and inexperienced squad and for the better part of the first half the youngsters were giving Juventus a run for their money.

The team spirt and atmosphere surrounding the club is something special with all the player hungry for success and pushing forward until the end. Pioli – with the help and experience of Zlatan and Kjaer – has built a unique group that has belief and desire to do great and we can only enjoy and complement their actions.

And while the bitterness is there, Milan have all the reasons to seek out the positives from the game as they were playing on par with the champions and should be proud of their achievements in the past year.

📊 All the stats from today's loss against Juventus… pic.twitter.com/OtqKFEMmBV

Tags AC Milan Milan-Juventus
Related Articles
Krunic honest in assessment of Milan’s collapse: “Something is not like before”
5 February 2023, 23:45
Sky: Pioli not at risk but Milan directors approached dressing room with ‘gloomy faces’
5 February 2023, 23:33
Pioli believes Milan are not yet ‘mature’ as he explains formation and selection choices
5 February 2023, 23:28
Serie A Standings