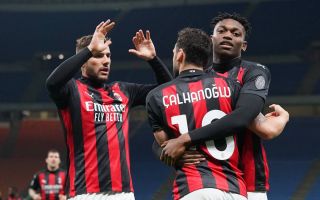 An early goal from Hakan Calhanoglu certainly helped to ease the nerves for Milan, who once again continued their theme of generating plenty of scoring chances without tucking them away.

The lead was doubled on the hour mark though as Theo Hernandez seized a rebound to slot into an almost empty net after Zlatan Ibrahimovic’s shot was parried, and in truth that was the goal that settled the result.

A wasteful Benevento couldn’t get a goal to make matters interesting in the closing stages as Milan put pressure on Atalanta, Juventus and Napoli around them, moving second for the time being.

Pioli made four changes to his starting XI from the team that lost 3-0 to Lazio on Monday night, with Zlatan Ibrahimovic, Rafael Leao, Diogo Dalot and Alessio Romagnoli coming in for Mandzukic, Rebic, Calabria and Kjaer – the latter duo having had flu-like symptoms on Friday.

It took Milan less than six minutes to break the deadlock as Calhanoglu scored in his second home game in a row. Having won the ball back up the field, a lovely give-and-go between the Turk and Saelemaekers ended with an excellent dummy by Kessie allowing the No.10 to roll the ball past Montipo.

Not long after though Milan’s leaky defence threatened to undo all the good work again, as a lovely chipped ball in behind the defence was bought down by Lapadula – played onside by Theo – however the ex-Milan striker couldn’t get a shot away and the Rossoneri could breathe a sigh of relief.

It really should have been 2-0 in the 14th minute when Milan got bodies in the box again. Montipo produced a smart save to deny Saelemaekers after some slick close-range passing inside the box, and Ibrahimovic collected the rebound but shot weakly with options to his left when he should have scored.

Ionita then tested Donnarumma for the first time with a 25-yard strike that was tipped for a corner, and from the resulting corner a counter was launched that had Milan 3-on-2 on the break, with Kessie carrying the ball and feeding Leao who saw his shot saved by Montipo.

Milan went in search of a second goal before the break that was lacking against both Genoa and Sassuolo, and Leao arguably could have done better when a cross by Calhanoglu was stood up from the byline onto his head at the back post, but the Portuguese forward never quite got the right connection and missed the target.

The save of the first half came from Montipo as he denied a certain second goal, leaping full stretch to his left to thwart a shot from Theo Hernandez that was flying towards the top corner.

The Rossoneri absolutely should have doubled their advantage minutes before the break when Bennacer took advantage of two slips to lead Milan on a counter that was actually a 4-on-2 at one point, yet Calhanoglu saw his cut-back blocked and the Algerian saw his effort jumped on too.

The final chance of the opening 45 minutes saw Montipo make another excellent save, this time extending his right boot well to deny Ibrahimovic whose low shot was heading for the bottom corner.

A change came at the break for Milan as Bennacer made way for Sandro Tonali, with Pioli perhaps wary that the former Empoli man was on a yellow card and had made a couple of enthusiastic tackles after.

Milan could have made it 2-0 inside the opening 60 seconds of the new half when Ibrahimovic was found all alone unmarked on the far side of the box, yet he was denied by another low save.

Benevento provided a brief reminder of the fact they were just a goal away from parity when a slip from Kessie was seized on and Dabo carried it forward before curling a shot wide.

Up the other end the Diavolo carved out another opportunity from a set piece with a header from a corner that was sent back over to the far post where Tomori was waiting, though he headed straight at Montipo from six yards out.

Moments later, Donnarumma was relieved to see an absolute laser strike from Iago Falque whizz wide of the near post with Romagnoli and Tomori both having stood off the attacking midfielder.

In what was a frantic start to the second half, Calhanoglu then missed the target in the 53rd minute having been found in space by Tonali. The former Leverkusen man should have done better.

Montipo’s boots continued to possess some magic as he saved from Ibrahimovic’s close range shot after the Swede received the ball following a fantastic one-two with Saelemaekers in which all that was missing was the finish.

Bang on the hour mark, Milan did get the second goal that their dominance deserved and it was Theo Hernandez who got on the scoresheet. A pass was slipped through to an unmarked Ibrahimovic in behind – who was being played onside by the left-back – and his shot was parried straight into the Frenchman’s path, leaving an easy chance to tuck into the bottom corner.

Lapadula twice looked dangerous for the visiting side when he headed wide after a free-kick and then shot just off target from Insigne’s feed.

A triple change came for Milan with 15 minutes left as Ante Rebic, Samu Castillejo and Davide Calabria came on for Leao, Saelemaekers and Theo Hernandez. The fourth substitute was Brahim Diaz, who came on for Calhanoglu.

The last action of the game saw Benevento have half-hearted appeals for a penalty rejected as Ibrahimovic had his arms by his side when blocking a shot, while on the counter at the other end Brahim Diaz fired into the side netting after a set-up from Castillejo.