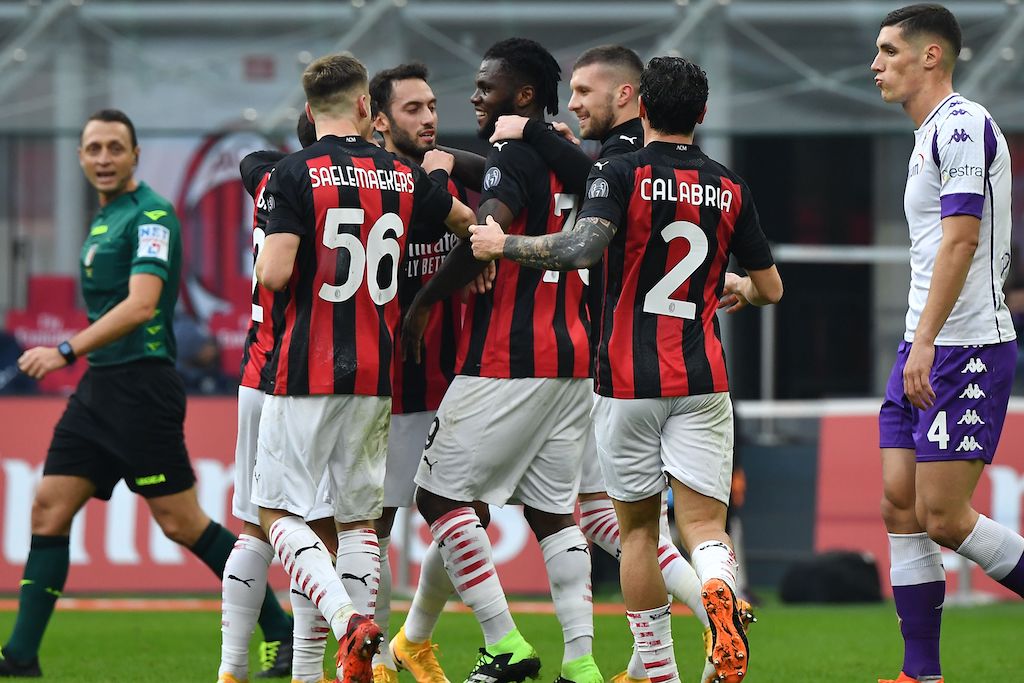 AC Milan extended their lead at the top of the Serie A table with a comfortable 2-0 win over Fiorentina at San Siro on Sunday afternoon.

Both goals came in the first half as Alessio Romagnoli’s close range header and Franck Kessie’s penalty put Milan in a commanding position that they would ultimately hold.

Kessie did miss a penalty that would have made it 3-0, but in the end the two goals would be more than enough to move the Diavolo five points clear at the top of the table ahead of Roma’s trip to Napoli later today.

The Rossoneri made five changes to their starting XI from the team that drew 1-1 against Lille on Thursday night, with Davide Calabria and Alessio Romagnoli coming into the defence, Franck Kessie into the midfield and Alexis Saelemaekers and Brahim Diaz in the trident behind Ante Rebic.

Milan probed inside the opening two minutes with Rebic and Brahim involved, the former whipping a cross in towards the Spaniard that he couldn’t quite control inside the area before Nikola Milenkovic – a reported Milan target – cleared.

The away side then began to grow into the game and there were a couple of nervy early touches for Gianluigi Donnarumma, but it was the home side who had the next opportunity in the 10th minute as a free-kick from the left side found Alessio Romagnoli who headed way over.

Fiorentina were causing problems down the left side as Ribery continued to be awarded too much space and on a couple of occasions Kjaer was forced to scramble the ball clear.

After being second best for large parts of the opening 17 minutes, Milan took the lead through a set piece. A wonderful whipped ball to the near post was glanced on by Franck Kessie at the near post, and captain Alessio Romagnoli was waiting at the far post to head home.

It could have been a two-goal advantage very quickly after the first goal, but Calhanoglu couldn’t quite get his neck muscle behind a Brahim Diaz cross that was just behind him.

However, Fiorentina gave a reminder of the threat they pose up the other end as a venomous near post shot from Vlahovic was just about parried onto the post and away from Donnarumma.

Moments after that Milan were given a chance to double their lead from the penalty spot. A ball in behind caught Fiorentina’s defence in transition and German Pezzella brought Saelemaekers down through on goal, with Kessie taking the responsibility and sending Dragowski the wrong way from 12 yards to double the advantage.

The second goal really asserted the Rossoneri’s dominance and they were very close to adding a third when Calhanoglu turned and fired on the spin from over 20 yards out with an effort that almost sliced into the top corner at the near post.

If before Milan had not come close to scoring from a corner all season, it looked like they would score from every one on Sunday as Kessie became the latest to head wide at the near post after another delightful delivery.

Eight minutes before the break the referee awarded yet another penalty to Milan. Theo Hernandez received the ball on the left side of the box and chopped back inside the area but went down after an arm on him from Martin Caceres. For the second time in the game Kessie stepped up, but this time Dragowski guessed the right way and parried the ball away.

Rebic had a huge chance to make it 3-0 on the stroke of half time as a ball whipped in from the right side went under Pezzella’s foot and found the Croatian unmarked inside the box, but he wasn’t expecting the ball to come to him so it hit his thigh and Dragowski could gather.

A familiar face made his way on to the field for Fiorentina at half-time as Giacomo Bonaventura came on in place of Jose Callejon.

Calhanoglu was inches away from getting Milan’s third goal seven minutes into the second half as he found some space inside the box and fired across Dragowski, who was only saved by the fact the ball rattled the post. From that Tonali arrived with a follow-up shot from 20 yards that the Fiorentina stopper did well to get down and save comfortably.

Donnarumma was called into action when Ribery had the freedom of Milano to dart through on goal, but the Italy international produced a strong hand to flap clear the Frenchman’s dinked effort before Romagnoli arrived with a vital clearance to snuff out the danger of the rebound.

Moments after Calhanoglu had seen a shot from just outside the box desperately blocked for a corner, Milan saw another familiar face enter the field as Franck Ribery made way for Patrick Cutrone.

Kessie wasn’t too far away from getting his name on the scoresheet again as from the resulting corner a second cross was knocked down into his path by Romagnoli, however the Ivorian hit his spinning first time shot narrowly wide.

Bonera made a change with 16 minutes left on the clock as Brahim Diaz made way for Rade Krunic in an attempt to shore up the midfield.

Inside the final ten minutes Jens Petter Hauge came on for Sandro Tonali in Milan’s second change, with the intention seemingly to retain the ball as much as possible and wind down the remaining minutes.

Saelemaekers found himself in a similar position to the first half when he burst through on goal, but this time the Belgian wildly slashed his effort wide of the near post after being put under pressure.

Donnarumma made another excellent low save down to his left side when Pezzella rose highest to send a powerful header towards goal in what was the visitors’ final chance of the game.