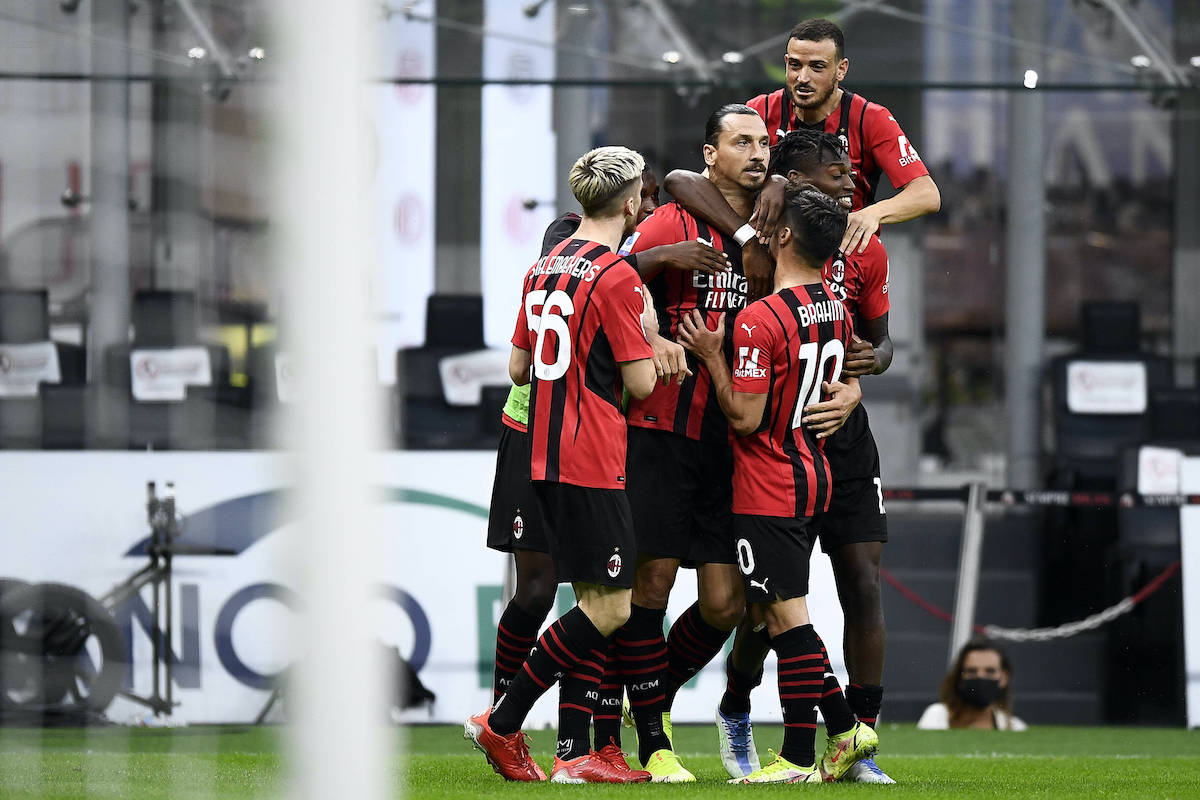 AC Milan made it three wins from three to begin the Serie A season as they ran out comfortable 2-0 winners over Lazio at San Siro this evening.

Both teams went into the game having won two from two but it was perhaps the away side who arrived having impressed more, as they racked up nine goals scored in their first pair of outings.

However, they were to have no such luck in Lombardy as Milan disposed of them with a very confident performance. The first goal came from Rafael Leao in the first half as the winger settled himself well before firing home.

As the game was entering a decisive phase it was Zlatan Ibrahimovic who got the second goal to take the sting out of the game as the 39-year-old came off the bench to score within minutes after excellent work from Ante Rebic down the left.

The win puts Milan top of the league albeit temporarily until Roma play, as one of only two teams (so far) to have won all of their league games this season.

There were four changes made to the starting XI from Stefano Pioli, with Alessio Romagnoli slotting into the back four allowing Simon Kjaer to rest, Franck Kessie coming back into the midfield, Alessandro Florenzi on the right wing and Ante Rebic up front.

The first half chance of the game fell to the home side inside the opening two minutes of the game. A free-kick from the left wing found its way to Romagnoli at the far post, and the boyhood Lazio fan drew a comfortable save from Pepe Reina after a touch and half-volley.

It was all Milan in the early stages and another opportunity came within two minutes of the first. This time Rafael Leao stood a perfect cross up for Fikayo Tomori after breezing part his man, though the Englishman could not keep his header down.

Lazio could barely get out of their opening half in the opening exchanges, and Theo fired the latest effort at goal in the seventh minute after the Rossoneri camped on the edge of the visitors’ box, but he shanked his attempt over.

There was a moment of panic for Milan when Sandro Tonali – who had been fantastic in the first part of the game – was clattered into near the half way line. He needed some extra treatment but was able to continue.

Leao was his usual electric self in the opening 15 minutes, with the Portuguese winger navigating his way into space around 25 yards out but instead of playing Florenzi in behind he shot well over.

A reminder of the spontaneous danger that the visiting side possess came not long after when a stooping backwards header from Milinkovic-Savic was gasped by a back-peddling Maignan.

Milan continued to dominate the chances being create with Rebic doing a good job as a hold-up forward. Florenzi should have done much better after a feed from the Croatia international with Brahim Diaz pleading for a cut-back across goal, shanking his shot into the side netting.

In the 25th minute appeals for a penalty were waved away as the pressure from Pioli’s side continued. A firm challenge from Lucas sent Brahim flying but was fair, and a header at the far post from a resulting cross was headed wide from Leao when he could have done better.

Despite a lack of goals, the first half was certainly anything but dull. There was a flash point not long before the half-hour mark when Theo Hernandez and Pedro squared up after the latter had fouled the former but the situation was eventually defused.

In the final minute before the break, Milan got the goal that their first half performance deserved and it came on the counter-attack. Rafael Leao jinked away from his man superbly and glided down the middle of the pitch, playing a one-two with Rebic that ended with a composed and precise finish inside the bottom-left corner.

There was a moment of drama at the end of the first half as Milan were awarded a penalty after VAR intervened. Kessie went down after contact from Immobile going for a loose ball and the replays showed the Ivorian got their first, and he dusted himself down to take the spot kick but hit the crossbar.

The Diavolo also started the second half on the front foot and twice the Lazio defence made important last-ditch interventions. The first came when Tonali fed Rebic who laid the ball off for Brahim, whose shot from the edge of the box was charged down, and the Spaniard should have done better on the second occasion too but was crowded out when he should have shot.

A triple change came on the hour mark to try and inject some new life but also some control to proceedings, with Zlatan Ibrahimovic, Tiemoue Bakayoko and Alexis Saelemaekers coming on for Leao, Kessie and Florenzi respectively.

Sarri’s side began to ask questions entering the last half hour of the game, and after Milan failed to clear a ball that fell to Luis Alberto there was some relief when the effort was skewed over.

It was fairytale stuff in the 67th minute as Ibrahimovic got his name on the scoresheet four months after his last appearance for the club. A ball was played through the Rebic on the left wing and the Croatian showed superb composure to wait for the right time to release a ball across goal to the Swede, who was waiting to tap home.

Milan were happy to contain after scoring the second goal and there were some lovely counter-attacking interchanges that should have been rewarded with goals, Ibra missing the best chance to wrap it up by firing over first time with 15 minutes to go.

The final change came when Brahim Diaz was replaced by Fode Ballo-Toure – perhaps the biggest sign that the Rossoneri were content with their lead.

Maignan was forced into his first challenging save of the night inside the final 10 minutes as Tomori jockeyed him and a low shot was collected at the second attempt. The Frenchman saved again from Basic in the dying minutes, with the game fizzling out and a deserved 2-0 win being the final conclusion.