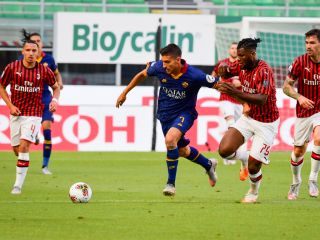 AC Milan 2-0 Roma: Five things we learned – Key man back with a bang; change must be made

Coming off a 4-1 away win against Lecce, Milan had a more difficult task ahead of them on Sunday evening with Roma coming to San Siro in a direct clash for the European place.

Stefano Pioli’s men did not look sharp in the first half but fortunately for them Roma offered little to nothing as well. The talk at the interval apparently did its job as Milan looked sharper and more focused in the second half, with Ante Rebic getting a deserved opener.

After a shaky start to the game, Theo Hernandez stepped up in the second half and earned his team a penalty late on which was converted brilliantly by Hakan Calhanoglu.

It was for once a comfortable and confident display by the team looking to build momentum in the final part of the season. Here are five things we have learned from the game…

1. Time for a change

While many fans fail to admit it, Giacomo Bonaventura is far from the player he was before his serious injuries. There is no malice intended behind such a statement as he has done a lot for the club, but his best days are long gone and he seems to offer less and less.

Lucas Paqueta on the other hand had a positive impact against Roma coming off the bench and being involved in the opening goal. The Brazilian made fewer mistakes and looked more determined, showing off his technical abilities numerous times.

👌 Some of that Flamengo flair. 🔴⚫️

Although not showing his full potential this season, it does look apparent right now that he should be the first choice playmaker and the next 10 games could be enough to change his fortunes entirely.

Speculation is rife at the moment regarding Milan’s future in terms of who the next manager will be and their possible targets, but one of the constant themes seems to be that a centre-back is needed.

However, while in search for a future profile Milan should not miss out on the opportunity they have to sign Simon Kjaer on the cheap, as the Danish international has looked brilliant since the restart of Serie A.

He managed to help his team keep a clean sheet against Roma and was a solid physical presence keeping up with Edin Dzeko. Bottom line, at a bargain price for around €3-4million, Milan should not let him go.

Alexis Saelemaekers has not played many minutes since he arrived in January, but the young Belgian was given a little more time to prove what he’s capable of against Roma as he came on early in the second half.

He looked pretty solid too, showcasing his quick feet and bringing some flair to the game that a tired-looking Samu Castillejo struggled to offer. While we did not see anything breathtaking, the 21-year-old looks to have potential to build on if given more playing minutes to gain confidence.

It’s fair to say that he is still adapting to Milan and Italy, but he is another player that the Rossoneri can acquire at a bargain price and it would look silly not to do so.

Against Juventus in the Coppa Italia and even in the 4-1 drubbing of Lecce it would be fair to say Ismael Bennacer did not look quite himself, but against Roma the Algerian stepped up again.

His willingness to take risks has allowed him to move the ball forward vertically in a quick and efficient fashion and create a lot of space for his teammates. While he did make a few mistakes while doing so, he then showed the defensive ability and tenacity to regain possession.

The former Empoli man should continue to be more persistent while dictating the game, and he should not stop trying to play that mezzala role that he does so well for his country. Fortunately for him he has Kessie besides him, who with physical presence is able to recover a lot of balls and keep the defence safe.

Yet again Milan’s hero was Ante Rebic. The Croatian scored his eighth goal in nine games with only Cristiano Ronaldo having a better minutes per goal ratio.

It seems that there is no stopping the former Eintracht forward and Pioli is surely enjoying this purple patch as he needs Rebic in this fight for Europe without Zlatan Ibrahimovic to call upon.

On the other hand, the management should start working on making Rebic’s move permanent, as he has more than proved his quality and will only get better with continuous game time and confidence.