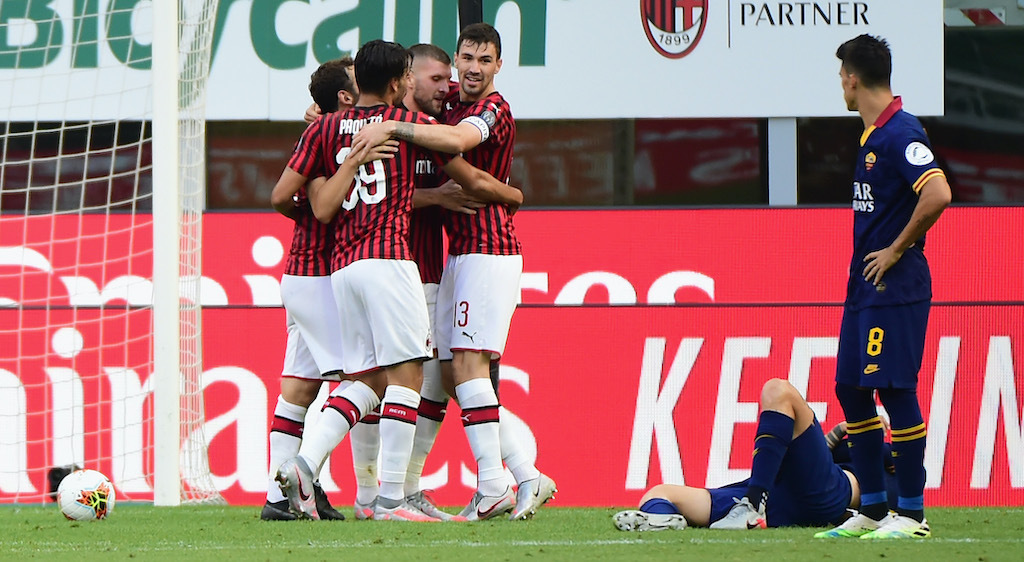 Ante Rebic was once again the hero for AC Milan as they secured their first win of the season against a top six club, beating Roma 2-0 at San Siro.

It was a game bereft of quality and composure for the most part, and it was perhaps fitting that Rebic scored such a scrappy opening goal, thundering home from inside the area after hitting the post initially.

The result moves Milan seventh in the table and level with Napoli once again, six points behind Roma in fifth.

Stefano Pioli named an unchanged starting XI from the side that ran out 4-1 winners against Lecce on Monday, with Simon Kjaer recovering from the knock he sustained to his knee.

Both teams started the game with hesitation as they tried to feel each other out in the midfield, with the two sides lacking any real quality in the rare occasions the ball found the final third inside the opening 10 minutes.

The visiting side began to probe in the 15th minute, and Kjaer did well to block a Pellegrini effort from inside the area after Kluivert’s cut-back had found him.

The Giallorossi caused some panic not long after when a ball was bent in towards the edge of the six-yard box from Mkhitaryan but Donnarumma lunged well to get a touch on the ball and divert it behind for a corner.

Edin Dzeko had a golden opportunity to give Roma the lead in the 20th minute when a cross from Kluivert was deflected on to his unmarked head, but he somehow glanced it wide from around eight yards out with the goal gaping.

From the next attack Mkhitaryan found space to fire a snapshot from outside the box however his effort was deflected wide for a corner, and from that Spinazzola headed into the keeper’s hands when he also could have done better.

The Rossoneri had to wait until the 27th minute for their first chance as some nice link-up play from Ante Rebic gave Bonaventura a chance to shoot from just outside the 18-yard box, but his effort was well wide.

Mirante in the Roma goal showed his confidence and composure to turn Rebic as he was about to tackle him inside his own six-yard box, and from that Kjaer produced a vital intervention at the other end to cut out a cross from the right.

Milan had another chance seven minutes before the break when a beautifully curled cross from Theo on the left met the head of Calhanoglu, whose far post header looped comfortably over the bar in the end.

Early in the second half Roma found themselves panicking when a pass from Spinazzola back to Mirante was cut off by Rebic, though the Croatian’s heavy touch took the ball out for a goal kick much to the relief of the full-back.

Pioli made two substitutions in the 54th minute as Castillejo and Bonaventura made way for Alexis Saelemaekers and Lucas Paqueta.

Milan began the second period better but failed to create any real dangerous chances; Bennacer coming closest with a volley from outside the area that he sliced wide albeit with venom. Roma’s heroic defending also deserved credit as they blocked shots from Calhanoglu and Saelemaekers before the hour mark that were destined for goal.

The game began to open up after the hour mark but both teams could not find the piece of cutting edge quality or the incisiveness to break the deadlock, with crosses struggling to beat the first man.

Mirante was forced into a smart near post save after a neat link up between Saelemaekers and Calhanoglu ended with the latter seeing his shot parried for a corner from a narrow angle.

The substitute Paqueta continued to be dynamic for Pioli’s side and drew another good low save from Mirante from his deflected effort.

Roma made a double save just before the final 20 minutes as Dzeko and Mkhitaryan were replaced by former Milan striker Nikola Kalinic and Diego Perotti respectively.

The Rossoneri made their second half dominance pay inside the last 15 minutes, and the goal came from none other than Ante Rebic. The 26-year-old released Paqueta down the left whose cross was turned back into the area by Saelemaekers, and Kessie’s volley was parried by Mirante into the path of Rebic, who hit the inside of the post with his first effort before firing into the roof of the net with the second.

Rebic was subbed off almost immediately after scoring in place of Rafael Leao.

The moment that sealed the game arrived in the 89th minute as Theo Hernandez was aiming to collect a loose ball inside the penalty area before being tripped over by Chris Smalling for a certain penalty.

Rather surprisingly it was Hakan Calhanoglu who took the spot kick, with Mirante guessing the right way but having no chance to save a powerful and well-placed penalty.

That would be the last major action of the game in what was a welcoming return to San Siro for the Rossoneri and a vital three points.