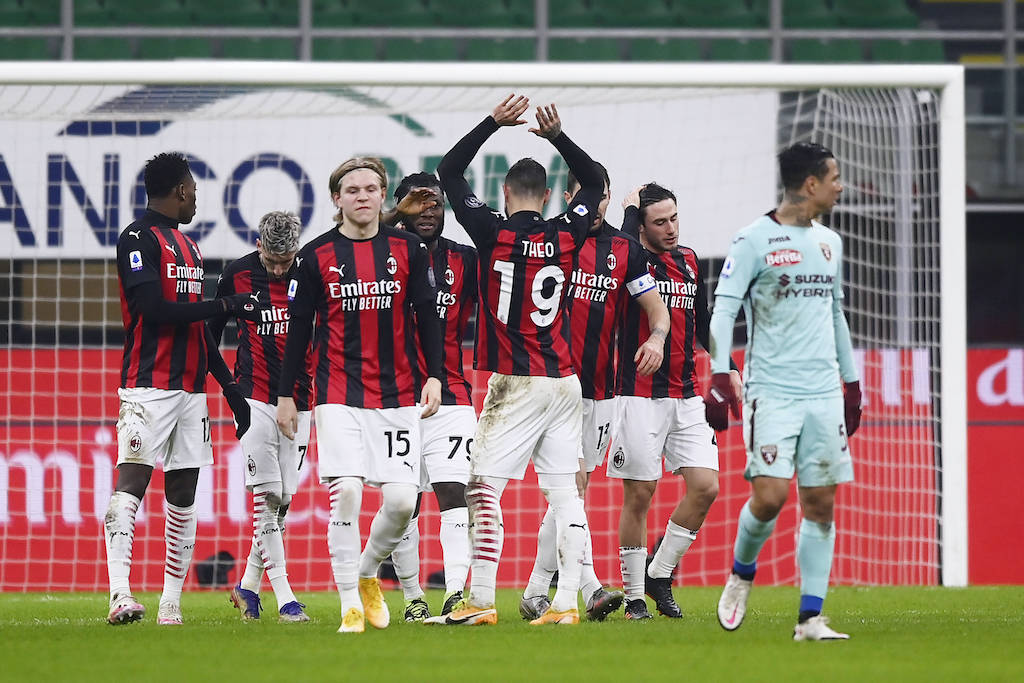 AC Milan 2-0 Torino: Leao and Kessie net as Rossoneri put the pressure back on Inter

AC Milan ensured that they will remain top of the Serie A table for another round at least with a 2-0 win over Torino at San Siro.

There would be more injury concern for Milan boss Stefano Pioli to endure though as Sandro Tonali and Brahim Diaz both came off in the second half, with the former having been injured in an incident which bizarrely saw a penalty awarded for Torino before being overturned.

The result means that the Diavolo temporarily move four points above Inter in second, though they do have a game in hand against Roma which will be played tomorrow.

Pioli made a few changes to his starting line-up compared to the team that lost to Juventus, with Davide Calabria shifting back to right-back, Sandro Tonali back from suspension in the midfield and Brahim Diaz replacing the injured Hakan Calhanoglu.

The home side started the game on the front foot and the first two shots on goal came from them, with the first being an effort from Calabria around 20 yards out that was deflected wide and the second – from the resulting corner – seeing Tonali fire straight at Sirigu.

Tonali was again the man who let fly from distance a few minutes later as he took on free-kick taking responsibilities in the absence of Calhanoglu, and from 25 yards out his effort deflected wide with Sirigu wrong-footed.

The Rossoneri were inches away from taking the lead in the 18th minute. Brahim Diaz was released by Leao down the right side and he put a gem of a ball across the face of goal that was just about desperately cleared before Hauge could arrive for a tap-in.

On the 25 minute mark, Milan took the lead with a fantastic bit of attacking play. Theo Hernandez was the driving force as his run down the middle allowed Brahim Diaz to put Leao through on goal, and he steadied himself with a touch before sliding the ball past the onrushing Sirigu.

Not long after, Milan were given the opportunity to double their lead from the penalty spot. Some creativity from Brahim Diaz saw him chopped down by Belotti inside the box, and Maresca pointed to the spot after a lengthy VAR review. Kessie took on the responsibility and buried the spot kick with aplomb.

🎯 No mistake again from the president…pic.twitter.com/QP12OKLwEK

If there were some question marks about Kjaer’s performance against Juventus, he went about proving the doubters wrong in the first half of this game, the highlight being an exceptional sliding challenge to deny Verdi as he was about to go through on goal.

Torino were inches away from getting themselves back into the game a few minutes before the break as former Milan man Ricardo Rodriguez crashed a free-kick from just over 20 yards against the crossbar.

The Rossoneri should have put the game beyond doubt in added time of the first half with a counter-attack down the middle led by Leao, but Kessie should have done better as he saw his shot saved by Sirigu.

The first major incident of the second half was also a penalty kick, as Verdi went down under a challenge from Tonali. However, it appeared as though it was the former who kicked the latter on the back of the leg before falling to the ground, and after VAR review the decision was overturned.

However, the down side to that was that Tonali picked up an injury during the incident and had to be replaced by Dalot, with Calabria moving into midfield.

Pioli opted to make a change on the hour mark as Hakan Calhanoglu entered in place of Brahim Diaz.

The game quickly became characterised by sloppy play from both teams, with the attacking department of Milan and Torino struggling to click and misplaced passes being the common theme.

With Tonali off the field, the Granata began to resume some control of the midfield battle, and Belotti was the latest to test Donnarumma with a near post header from a corner that in the end was an easy save for his compatriot.

News then filtered through that Brahim Diaz had come off because he suffered an injury and could not even put his foot down, and on the field Leao went into the book for what the referee adjudged to be a dive, though it looked like there was a clear foul on the Portuguese. The yellow card means he will miss the trip to Cagliari.

With six minutes left on the clock Pioli made his final changes as Daniel Maldini and Zlatan Ibrahimovic made way for Leao and Hauge.

The final chances of the game came during the six minutes of injury time as Donnarumma made an excellent save to deny Segre and preserve his clean sheet, while Kessie slid in magnificently to block an effort from Verdi.

In the end the two first half goals would be enough for Milan to extend their lead atop the table again for the time being.