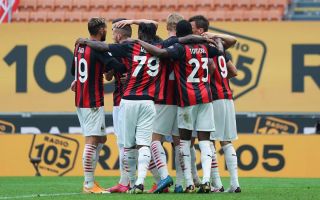 Having won 3-1 against Parma away from home, Milan faced Genoa at the San Siro this week in a game that had to be won in order to put pressure on all teams in the battle for the top four.

The game started off really well for Milan with a thunderbolt of a strike from Ante Rebic in the 13th minute. The Rossoneri seemed in control, but fell asleep during a corner kick in the 37th minute of the game, allowing Mattia Destro to equalise after poor defending by Fikayo Tomori.

Milan struggled then in the second half to be clinical in front of goal as they had a lot of chances that could have been taken better. Unfortunately for Pioli with his star man in the face of Ibrahimovic missing, Rafael Leao failed yet again to produce a performance up front.

Fortunately for the home side, Gianluca Scamacca scored an own goal after a corner kick to give Milan all three points, but the performance was far from pleasing as the Rossoneri need to improve going into the final games of the season.

It was a rather disappointing first half of the season for Rebic to say the least, but the Croat has found some continuity since the turn of the year – scoring six goals in 2021 – and has done better for his team.

He scored a lovely goal last time out against Parma and continued that streak with a magnificent striker against Genoa. The winger had an overall good performance, but he could have done better early in the second half to score another goal. Despite the miss though, he looks a bit more like his former self and it is good to see going into the final games of the season.

2. Not the best of games

Bennacer, in contrast to Rebic, had a game to forget as he seemed off pace giving away balls and making sloppy mistakes that are not typical for his game. The Algerian has been improving since coming back from injury, but certainly wasn’t at his best against Genoa and he will need to react.

That being said some of the players around him didn’t make his life easier, but Bennacer looked a bit tired after his initial bursts and not so energised. Fortunately for Pioli, he could play Tonali in the next game if that were the case.

3. Duo best on the pitch

One thing has been fairly consistent for Milan in the past couple of weeks and that has been the centre-back pairing between Kjaer and Tomori.

Whilst Tomori did not react at all on Destro’s goal, the Englishman was good for the rest of the game again making key interceptions as well as clearing the ball off the line to help Milan get all three points. Tomori was also good on the ball and it would have been a near perfect outing had he not lost Destro on the corner.

Kjaer on the other hand has been a stable since last January and continues to be as he as well have several key tackles throughout the game.

⚔ Warriors at the back.

It was another rather disappointing performance by Hakan Calhanoglu who failed to produce much versus an opponent against whom you would think he should be pulling the strings and creating a lot of chances.

The Turk hasn’t really been influential for quite some time now and even his supposed speciality – set pieces – were really bad on occasion. As a player demanding a higher salary, one of the highest at the club in fact, he will have to do much better than that especially when we are talking about the No.10 that needs to be the creative force of this team.

Mario Mandzukic was unfortunate to pick up an injury shortly after joining the club in January, but he finally recovered and was fit to get some minutes into his legs.

While his stamina wasn’t the greatest even after joining in the 60th minute, the veteran was really helpful for Milan as he was seen deep in his own half recovering balls and helping his team seal the win.

Mandzukic was also troubling Scamacca on that corner kick for the second goal and it was a fairly good performance by Mario in his first game after the injury.

READ MORE: Milan, Inter and Juve reiterate stance on Serie A participation in meeting with other clubs