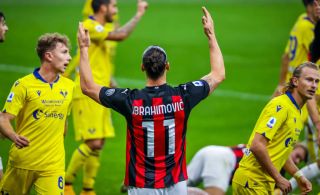 AC Milan left it late on Sunday night at San Siro as they battled back from two goals down to earn a draw against Hellas Verona.

Looking to respond after Thursday’s 3-0 defeat against Lille, the Rossoneri found themselves in a horrendous position as they were two goals down inside 20 minutes.

Antonin Barak got the first, stabbing home from close range after a header from a corner has bounced down off the crossbar, and the lead was doubled when a shot deflected off Davide Calabria and went in.

The home side roared back though, halving the deficit as a Franck Kessie flick was diverted into his own net by Giangiacomo Magnani, and though Zlatan Ibrahimovic missed a penalty and was responsible for a late disallowed goal, he popped up in the 93rd minute to rescue a point.

The significance is that Milan’s unbeaten run in Serie A stretches to 19 games and their lead atop the Serie A table is extended to two points, but it does feel like two points dropped when you see the statistics.

After rotating for the game against the Ligue 1 high-flyers by bringing in Dalot, Tonali, Castillejo, Krunic and Brahim Diaz, Pioli has reverted to what most would consider his strongest XI as Calabria, Bennacer, Saelemaekers, Calhanoglu and Leao came back in.

The Rossoneri started brightly and inside the opening couple of minutes Rafael Leao found some space to cross from the left side but could not find a man, and from the resulting corner Ibrahimovic struck his first-time effort over on the spin.

However, the away side took the lead and again it came from a set piece. Donnarumma did well initially to deny Kalinic after Zaccagni had dribbled to the by-line and pulled the ball back, and from the corner that Federico Ceccherini headed onto the crossbar it was Antonin Barak that reacted quickest to poke home from close range.

Milan set about getting on level terms quickly, and Ibrahimovic found Saelemaekers with a nice incisive pass though the Belgian could not beat Silvestri with a shot from near the edge of the box.

However, things went from bad to worse for Milan in the 19th minute and it came from yet another set piece. A free-kick was well headed clear from the penalty spot, but a volley from Zaccagni on the edge of the box sent it back goalwards, with the ball deflecting off Calabria and wrong-footing Donnarumma.

The Rossoneri were rocked and had to try and reset and get a foothold in the game quickly, with Leao forcing a save out of Silvestri with a deflected shot after a nice jinking run on the break. From the corner that resulted, Gabbia headed over from Calhanoglu’s cross when he should have done much better.

In the 27th minute, Milan did halve the away side’s deficit, and it was yet another own goal. A neat interchange down the right side saw Saelemaekers whip a ball in that was flicked on at the near post by Kessie before deflecting off Magnani and inside the far post.

Pioli’s side really seized the momentum after that and were very close to levelling the scores when Theo Hernandez stumbled through and had the task of beating Silvestri from inside the six yard box, but the keeper made himself big and saved well.

The opportunities kept coming, and Simon Kjaer should have done better when he got his head cleanly to a Calhanoglu free-kick, but the Dane headed over.

Pioli decided to make a change at half time, and it saw Ante Rebic enter the fold in place of Saelemaekers.

Milan started the second half on the front foot and began trying to break down a Verona side that were clearly throwing caution to the wind with a goal lead, and Bennacer should have tested the goalkeeper when Calhanoglu found him unmarked on the edge of the box, the Algerian instead curling his effort wide.

Zaccagni continued to cause problems for Calabria and the winger burst past the full-back to find Dimarco, who should have made it 3-1 with his shot towards the top right corner that flew narrowly over.

Milan thought they had levelled moments later when Calhanoglu bundled home from a deflected Leao shot, but the linesman flagged for offside and after a VAR review it was proven to be the right decision.

Theo Hernandez had yet another absolutely golden chance to level the game when he was played in behind after a neat one-two with Rebic, though Silvestri saved fantastically as the Frenchman went for the near post finish.

From the corner that came though, the Rossoneri were given the chance to level from the spot as Kessie was kicked by Lovato as he want for a pass from Theo. Ibrahimovic took the responsibility, but missed from the spot again as he inexplicably laced the ball way over the bar.

The Swede looked keen to make amends for his penalty miss and was charging around with renewed vigour, but again he missed the target as Calabria stood a cross up to him from the right side.

Seconds after Ibrahimovic saw a shot blocked behind after a nice feed from Calhanoglu, the 39-year-old was frustrated again as the corner that came in after was crashed onto the bar. The pressure kept piling, and Ibra was again denied at point-blank range by Silvestri after a deflected Rebic cross looped to him.

With just over 12 minutes to go Pioli rolled the dice again, bringing Brahim Diaz on for Leao, who seemed to limp off the pitch.

The pressure was building and the final change came four minutes from time with Jens Petter Hauge coming on for Calhanoglu as the Diavolo piled bodies forward.

Milan thought that they had finally got an equaliser that they deserved when the ball dropped inside the box and Calabria fired home with a sweet finish, but the goal went to VAR and Ibrahimovic was adjudged to have handled the ball as he went up for the knockdown, compounding a miserable night for the striker.

Every single piece of action seemed to be going through Ibrahimovic, and he finally got his name on the scoresheet in the third minute of added time. Having seen his touch and half volley saved by Silvestri, Calabria retrieved the loose ball and dinked over a gorgeous cross for Zlatan, who headed in at the far post to make it 2-2.

Milan then began pushing for a winner, and Calabria was involved again as he tried an acrobatic winner from inside the area after a low cross from Rebic, though it was an easy save in the end.