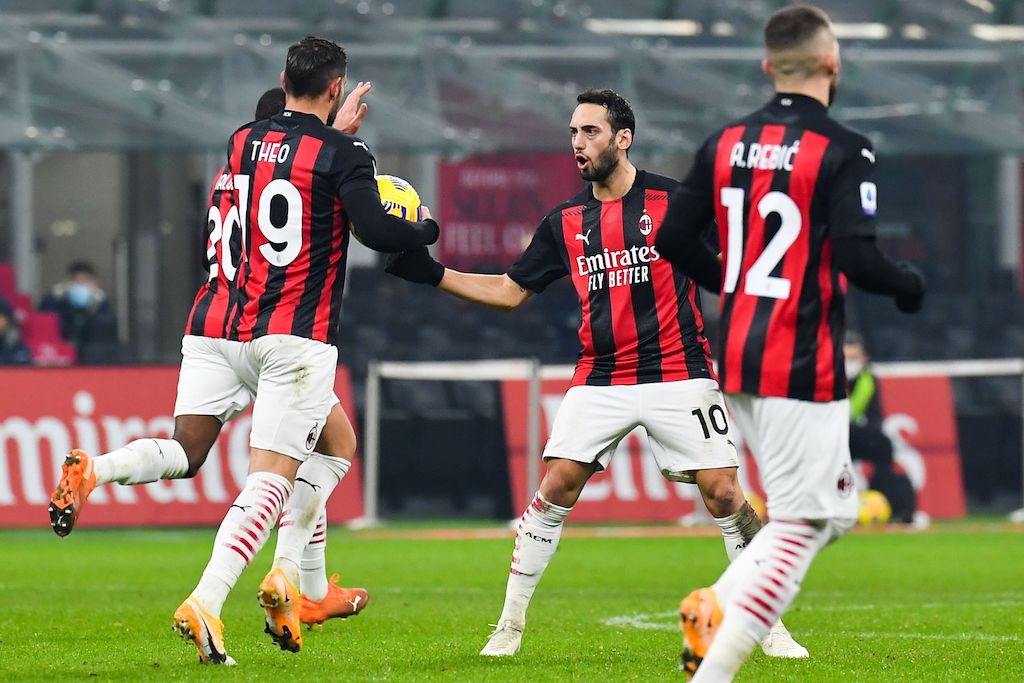 AC Milan 2-2 Parma: Five things we learned – roaring back with Theo and a rare off-day

It was not the most pleasant night for the Rossoneri as they found themselves trailing by two goals against Parma at San Siro, but they managed to score a late equaliser and avoid defeat.

Milan managed to overcome Sparta Prague with relativel ease to secure first spot in the Europa League group stages on Thursday while resting all key players in order to be keep them fit for the Parma game.

However, that turned out to not be as helpful as initially intended as it was Parma who opened the scoring. The Rossoneri were struggling to get an equaliser with Rebic not feeling at his best in the striker position.

It was the away side who got a second goal which triggered Milan to go forward even more, getting one back moments later through Theo Hernandez. Fortunately for Pioli, Theo would score a late equaliser to rescue a point from the jaws of defeat.

While the absence of Zlatan Ibrahimovic hasn’t affected Milan as much as people thought it would, it is still quite obvious that without the Swede on the pitch the Rossoneri are lacking that target man in the penalty box, as seen with all the unsuccessful crosses and Rebic failing to make an impact.

You can make a case that Leao was doing quite well before his injury while playing as striker, but even then he was drifting wide and trying to get the ball deeper, therefore he doesn’t really classify as a target man.

With 26 shots in the game against Parma, Milan only managed two goals and Zlatan’s absence was felt more than it has been before. Even in previous games, despite winning the absence of that type of striker was felt and the management needs to address the problem in January, should they expect anything big from the team.

Franck Kessie has turned into a pivotal figure in this current Milan squad, but he won’t be happy with his performance against Parma.

While his performance in the attacking phase was solid as usual, his defensive game wasn’t up to his standards. On the first goal, the Ivorian was too deep in the penalty box failing to mark Hernani which was a strange decision.

While the second goal wasn’t only his fault, he did allow Parma’s man enough space next to the corner flag so he can make a nice cross in that lead to a second goal. He could have pressured him more closing the space between them rather than thinking he can’t produce anything from there.

We can’t be too harsh on him though, as both of the goals were poor team efforts more so than individual mistakes, but Kessie could have done better to fix his teammates mistakes.

After a high-flying second part of last season, Ante Rebic has been struggling to live up to that form in this season. The beginning of the season for him was disrupted by an injury that kept him out for several weeks and now after being fully fit, the Croat is playing out of position as a striker in the absence of Zlatan.

Clearly, however, Rebic is struggling with the task given to him as he is in far from the fierce form we saw post lockdown. Hopefully, with Zlatan returning, Ante can move to the left and find his mojo as his team will need him.

He has contributed with assists it must be said, but opposing teams are happy to see Milan’s No.9 drift wide and stay away from the danger areas.

Pierre Kalulu was given another chance against Parma, although it was at the cost of Gabbia being injured early on in the game.

The Frenchman, however, played really good throughout the game showing nice pace and skills on the ball. His defensive contribution was really good as well.

With the former Lyon man making both his Europa League and Serie A debut within a few days, we have to say he has been quite mature and impressive and will surely be one for the future if he continues like this.

If the night and result themselves weren’t as pleasant, Theo Hernandez’s performance was a very bright spot. The Frenchman was once again explosive on the left going forward constantly winning free-kicks for his team, being a threat for Parma.

His defensive work was also brilliant, but his work-rate at the opponents half was more than outstanding. He got a goal back at the right time by acrobatically heading in a corner, but he continued bursting forward and in the dying seconds of the game he launched a rocket past Sepe to make it 2-2.

A roar followed from the former Real Madrid man, meaning you could see just what it meant to him. You can’t win them all, but you never stop trying.