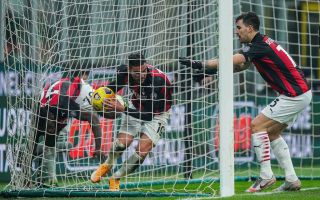 AC Milan once again battled from two goals down at home to rescue a thrilling 2-2 draw against Parma at San Siro on Sunday night.

Despite having the vast majority of the chances and possession, the away side found themselves a goal up at half-time through Hernani’s strike.

It was 2-0 in the second half against the run of play again as Kurtic arrived to head home from the penalty spot, but then the Theo Hernandez show ensued.

The full-back halved the deficit moments after the second goal with a thumping header, and in the first minute of added time at the end of the 90 he was on hand to hammer home a loose ball and rescue a draw.

The result extends Milan’s lead atop the Serie A table to three points, with Inter having beaten Cagliari 3-1 earlier in the day.

As was expected, Stefano Pioli has made 10 changes to his starting XI from the team that beat Sparta Praha as Donnarumma, Calabria, Gabbia, Romagnoli, Theo Hernandez, Kessie, Bennacer, Calhanoglu, Brahim Diaz and Rebic came back into the line-up.

Parma had the better of the opening exchanges and fired the first shot inside the opening 60 seconds as Karamoh put his foot through one on the half-volley from outside the box, though it was comfortably over the bar.

Pioli was forced into an early change less than five minutes in when Matteo Gabbia went down after a challenge for a loose ball and he was unable to continue, meaning Pierre Kalulu came on for his Serie A debut.

Milan then got themselves forward, and Samu Castillejo was not far away from ghosting in at the far post to convert a teasing whipped ball from Ante Rebic though he was just a half second behind it.

Parma took the lead inside the 13th minute, and it was the tricky Gervinho who created it. A marauding run down the left wing was actually well checked by Kalulu, but he dug out a perfect cut-back to the penalty spot where Hernani was waiting to sidefoot inside the far post.

Gervinho and Karamoh continued to cause problems down the flanks, and the former nutmegged Theo Hernandez before crossing to the latter who somehow headed wide unmarked at the near post.

Milan thought they had levelled the game just beyond the half way point of the first half as a devastating combination between Rebic and Theo Hernandez resulted in the latter firing the ball into the danger zone and Castillejo converted at the far post, though after a length VAR check the winger was ruled offside.

Brahim Diaz should have hit the target a few minutes later when a corner was cleared to him 20 yards out, though the Spaniard let himself down by shooting wide after a nice touch to set himself.

The Rossoneri were firmly in the ascendency at this point, and in the 37th minute Castillejo was not a million miles away from curling a speculative left-footed shot into the top corner, that coming moments after Rebic had burst in behind but saw his effort blocked by a fantastic last-ditch challenge.

Milan were inches away from levelling twice in the period of a few seconds. Brahim found space to shoot on the edge of the box and curled an effort onto the intersection of where the right post meets the crossbar, and then a follow-up effort from Calhanoglu skidded off the pitch and deflected onto the underside of the crossbar and away.

The penultimate chance of the opening 45 minutes came when Castillejo directed a header straight at Sepe in the Parma goal after an excellent cross from Rebic.

Remarkably, the home side then hit the woodwork again in added time through a Calhanoglu free-kick from 25 yards that was struck with venom towards the near post but unlike the goal against Celtic, it struck the post and bounced away.

Pioli made two changes at the break in an attempt to transform his side’s fortunes as Rafael Leao and Jens Petter Hauge came on for Rebic and Castillejo.

Leao looked very lively in the opening minutes of the second half and the Portuguese forward drifted wide right before crossing perfectly for Kessie whose thumping header was blocked by a Parma defender who knew little about it.

Remarkably, Milan hit the post again in the 51st minute as Calhanoglu – who had been found unmarked in the box by Leao’s ball in behind – fired an effort at the crossbar after setting himself well.

Despite Milan having had absolutely all of the play, it was Parma who doubled their lead. A cross from the right wing was floated onto the penalty spot where Jasmin Kurtic ghosted in to head in as Donnarumma could only palm his effort onto the post and over the line.

The visiting side would not get to enjoy the two-goal advantage for long though, as an inch-perfect corner from Calhanoglu was met by the diving head of Theo Hernandez who made no mistake from six yards out to make it 1-2.

Calhanoglu fired another fierce free-kick on goal with 25 minutes left just off the left corner of the box, but Sepe guessed right and was able to catch comfortably.

Calhanoglu’s bad luck continued when his left-footed shot from distance was parried away by Sepe; the ball destined to creep inside the far right post.

There were flashbacks to the Parma game last season when with seven minutes remaining he fired a howitzer of a shot from outside the box but this time it was not on target.

Just as it seemed that Milan were out of ideas and out of hope, Theo Hernandez was the man who popped up to equalise in the first minute of added time. An excellent cross from the right flank was diverted goalwards by Rebic but Sepe saved, though the left-back was on hand to fire into the bottom corner and rescue a point.

That would end up being the last major action of the game as Milan were forced to settle for a point, but much like the Hellas Verona game it was a morale-boosting comeback.