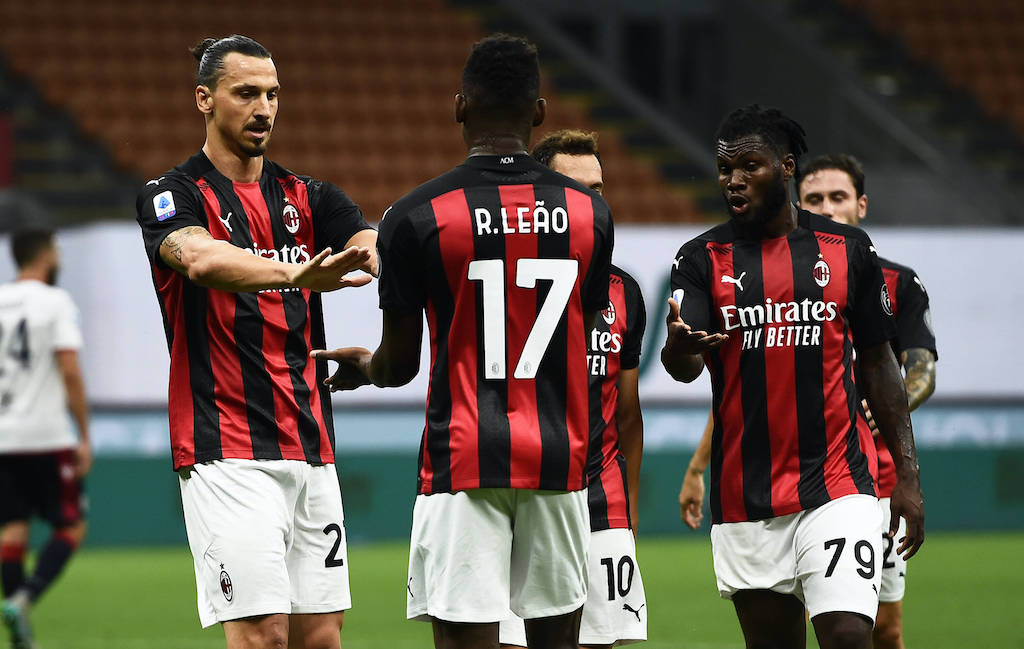 AC Milan 3-0 Cagliari: Rossoneri end the season on a high as Leao, Ibrahimovic and Castillejo net

AC Milan ended their season in the best possible way on Saturday night, with a clean sheet and a 3-0 victory over Cagliari at San Siro.

It was an own goal from Ragnar Klavan that started the scoring after some fantastic individual work from Rafael Leao. Zlatan Ibrahimovic doubled the advantage with a thunderbolt into the top corner, and moments later Samu Castillejo fired past Alessio Cragno to complete the rout.

The Rossoneri could have had more in truth, as Ibrahimovic missed a penalty and an easy chance at the back post, but in the end it was a job well done for a side who have won nine out of 12 games since Serie A resumed.

Milan boss Stefano Pioli made two changes to the team that ran out 4-1 winners at Sampdoria as Rafael Leao and Samu Castillejo started in place of Ante Rebic (suspended) and Alexis Saelemaekers respectively.

The first half chance of the game went to the home side after a period of early pressure, with Theo Hernandez heading over from a corner.

There was more panic inside the Cagliari penalty area inside the eighth minute when a cross from Calhanoglu flashed across the face of goal with Ibrahimovic lurking at the far post.

Milan did take the lead moments later though, and it was the brilliance of Leao that opened up the Cagliari back line with his quick feet, shifting the ball onto his left before shooting against the far post. The ball rebounded onto Ragnar Klavan, who could do nothing but watch as it cannoned off him and in.

It should have been 2-0 not long after as Castillejo will feel disappointed to have fired straight at Alessio Cragno with his first time shot after a delightful cut-back from Leao.

Ibrahimovic the had a huge chance to double the advantage inside 23 minutes when a perfect cross found him unmarked around six yards out, however the Swede inexplicably fired straight at Cragno.

Leao was once again the architect of a moment of brilliance less than a minute later as Calabria’s cross was thumped onto the crossbar with an incredible overhead kick.

The Portuguese starlet then pulled up with what looked to be a groin injury, and in the meantime Cagliari caused panic with a ball in behind that Kjaer did well to cut out before the shot on the follow-up was placed just wide.

Ismael Bennacer became the latest player to fire at goal in the 38th minute when he rolled an effort wide from outside the box after neat interplay involving Ibrahimovic, and straight after Giacomo Bonaventura came on in place of Leao.

Milan were awarded a spot kick inside the final five minutes of the first half as Ibrahimovic’s far post header was blocked by the arm of Walukiewicz. Referee Marco Serra had no hesitation in pointing to the spot, however the Swede saw his effort saved by Cragno as he went for his usual bottom left.

Ibrahimovic turned provider for Milan’s first big chance of the second half, as the 38-year-old showed he still has the legs to race clear of defenders before squaring to Calhanoglu, who somehow fired his effort into the ground and over.

Zlatan would get his goal in the 55th minute, and it was more than worth the wait. A wonderful counter led by Theo Hernandez saw Castillejo roll the ball to Ibrahimovic, who took a touch before despatching a rocket of a shot into the top left corner past Cragno.

It was just over a minute later when the Spaniard got his name on the scoresheet. Substitute Bonaventura received the ball on the right edge of the box and rolled it to Castillejo, who spun and fired into the bottom corner.

There was further cause for celebration when Alexis Saelemaekers, Daniel Maldini and Marco Brescianini came on in place of Castillejo, Calhanoglu and Bennacer.

The one way traffic continued as Giacomo Bonaventura fired over the bar after Ibrahimovic had gone down in the area, and moments later Leo Duarte came on in place of Kjaer.

In the end, there would be no more notable action as the referee blew the final whistle after 92 minutes, bringing the curtain down on a rollercoaster season which will see Milan enter the Europa League qualifiers.