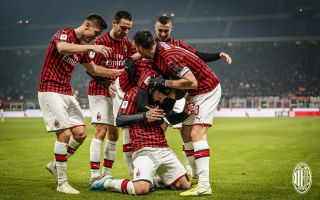 After a 2-0 win away from home against Cagliari, Stefano Pioli was forced into changes against SPAL, but the Rossoneri avoided a shock to reach the quarter-finals.

Although facing a team sat at the bottom of Serie A, Milan had a good night with key players performing well and a result that is surely going to boost the morale.

Ante Rebic, Krzysztof Piatek, Rade Krunic and Andrea Conti all got a chance to show their capabilities, with the Pole netting a goal and adding an assist in his best performance of the season.

Kjaer was another pleasant surprise as he had a solid performance partnering up with Alessio Romagnoli, while Samu Castillejo continued to impress on the right wing.

Simon Kjaer made his Milan debut and while this SPAL side are not having the best of seasons, it is worth mentioning that the Denmark captain was thrown into a makeshift rearguard after one training session.

The Sevilla loanee had a strong physical presence and though he did lack pace at times – something which may be a problem against better opponents – he is almost certain to at least at depth and at best take the place of the inconsistent Musacchio moving forward.

Nothing much to say here other than that Samu Castillejo provided a brilliant performance. The Spaniard was arguably Milan’s best player as his speed and energy allowed him to take on players and create chances.

If he continues with this kind of confidence, there is no reason that the 24-year-old can’t be the idea replacement for Suso if a winger is not brought in, as the former Villarreal man looks to offer things that his compatriot frankly doesn’t.

️⚽️ Another look at this beauty? Go on then…

He was full of energy throughout the whole game, always giving his all, which eventually resulted in a beautiful goal scored from the edge of the penalty box. Hopefully Pioli will continue to rely on Samu and put his faith in players who have shown they deserve it.

With the 38-year-old Ibrahimovic being bubble-wrapped for this fixture, Piatek got his chance from the start and he finally produced the performance we have been waiting for.

As mentioned, he scored with a composed finish from a one-on-one and showed equally good judgement to pick his head up and square the ball for Castillejo’s goal in what was a very impressive first half.

It was about time for the Pole to look a little like his former self, but with rumours surrounding his exit it might be too late. While it is believed there are multiple teams pressing for his signature, Piatek may have a few more games to further build on this performance and have the chance to stay.

That is only if, of course, he is willing to accept reduced game time as it is unlikely that Zlatan will start on the bench against Udinese or most league games for that matter.

However, despite the good performance, only one good game will probably not be enough to change the mind of the board nor to convince interested clubs he is worth the reported €35m asking price.

Even though he began this particular game at a lower-than-usual pace, his second half was just brilliant as he scored a wonderful solo goal to make it 3-0 for Milan.

With seven goal contributions since the start of the season, Theo is by far one of the best deals that the Rossoneri have pulled off in recent memory, and his €20m transfer fee is beginning to feel like a jackpot bargain already.

At the age of 22 he has a lot of room to grow and to improve too under the watch of Paolo Maldini. Hopefully,the Frenchman will make it to this year’s European Championships with France: it is simply a must if he continues like this.

Stefano Pioli’s decision to switch from a 4-3-3 to 4-4-2 seems to have made the team more comfortable now, and with a more defined shape and focal point to their play.

With two strikers up top – allowing ‘Leabrohimovic’ to flourish – and a midfield spine led by Bennacer, Milan for once look like they have a reliable core.

Out wide, Samu’s speed on the right allows him to generate attacks and spring breaks quickly, but he is also more responsible on the defensive end too which Suso was not.

On the left Calhanoglu and Bonaventura have been doing average as of late, but we can’t help but feel that the Turkey international’s defensive contribution allows Theo to go bursting forward and create overload situations which allow him to do what he does best.

With only one loss in the last eight games and five clean sheets, Milan’s defence looks solid when switched on – Atalanta aside of course. They are promising signs, but what does it mean for the likes of Lucas Paqueta?