AC Milan have never lost to Chievo at home and tonight was no different. An important three points moves the Rossoneri one step closer to European competition.

The game started and finished extremely open. In fact, it was anyone’s game right up until Milan’s third goal and even after that Chievo had some chances.

There was not much to report until the 15th minute which marked the first shot of the game; a Chievo strike wide of the target.

After this Milan failed to close down the visitors and Verona began to rain in. A big save from Gigio in the 20th followed by a narrowly missed volley a minute later, it appeared Milan were going to fade away.

As things go in football, once Milan appeared the weaker side they break the deadlock with an odd strike from Carlos Bacca to break his goal scoring drought as well!

Now Milan look the aggressors as Locatelli shots from distance, again just wide of the post.

In the 33rd minute Deulofeu made a waving run into the box before going down due to an arm swung into his face. No penalty was given and Gerard received a dubious yellow card for the protest. 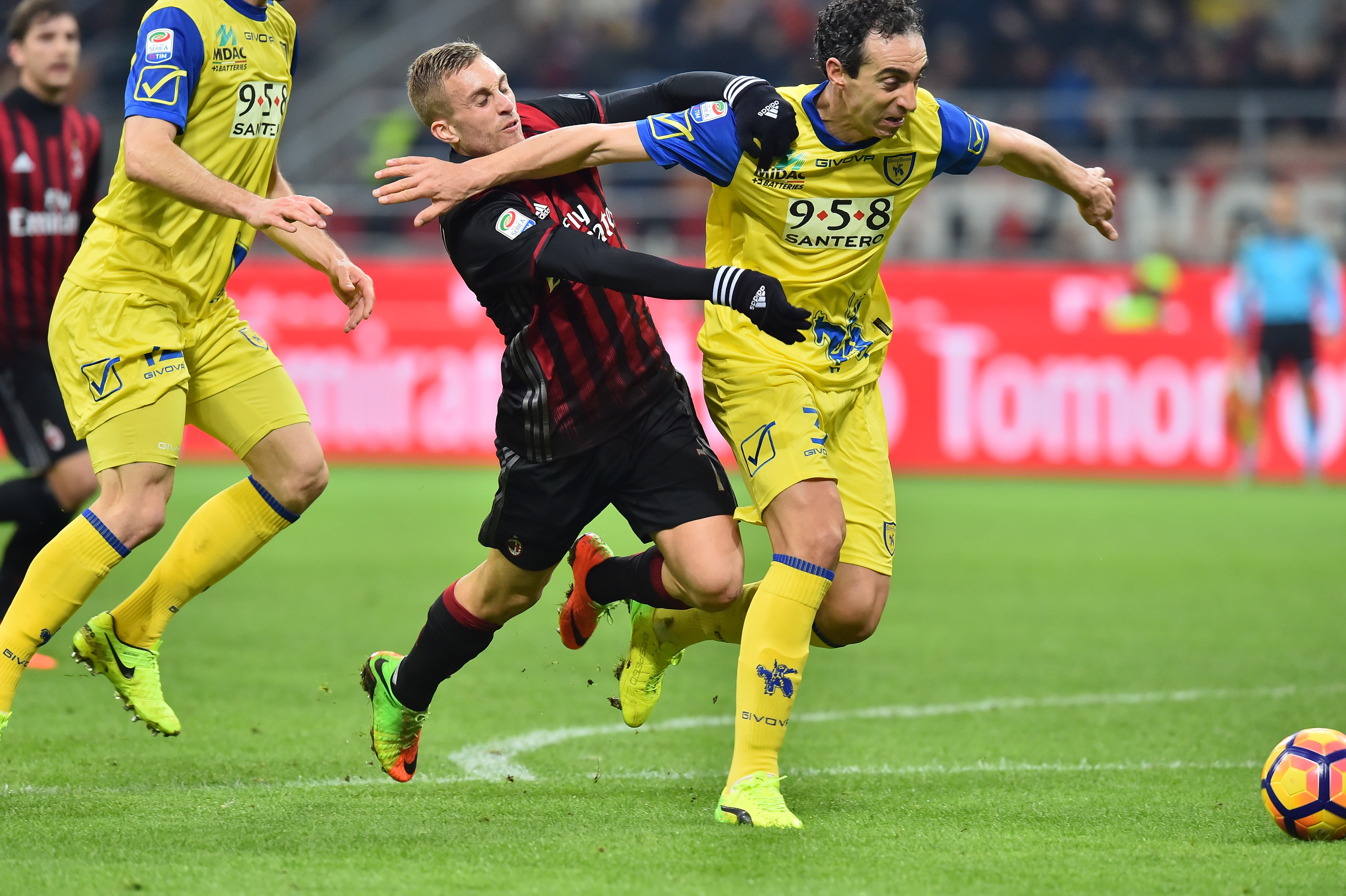 Three penalties were granted in the game and all would be less justified than this one that was ignored.

With the good comes the bad. Immediately after wrongfully being denied a penalty, Suso pulls up injured and is substituted.

Chievo play an offside ball into the box which is ignored and Gakpe goes down from the slightest touch of De Sciglio signalling the first penalty of the game.

Two minutes would be added and right before the break Locatelli would rocket a shot into the box which finds Cesar’s arm. Penalty to Milan. Bacca lines up to take the shot, and shoots its wide and over. We are level at the break.

Things begin similar to the first half, very open with not much closing in from either side. In the 61′ Montella recognizes the threat and makes a tactical change, bringing on Lapadula in place of midfielder Locatellli.

70′ and Bacca scores his brace with another good shot, it would be just a minute later he is set to complete the hat trick but instead shoots an easier shot high and wide once again.

Now just four minutes after that big miss, Carlos has a chance at redemption but misses the bicycle kick. Safe to say the Colombian had a strange night.

Just before the 80th minute coach Vincenzo Montella makes another smart move by reverting to the old formation and relieving Bacca of his duty to the sound of applause with Kucka replacing him.

Seconds later, Ocampos would kick the boot of Izco and go down which leads to the referee pointing to the spot once again. One has to assume it was a “make up” penalty for the one wrongly not given to Deulofeu in the first half. Lapadula would be the man to take and convert the penalty giving Milan the 3-1 lead. 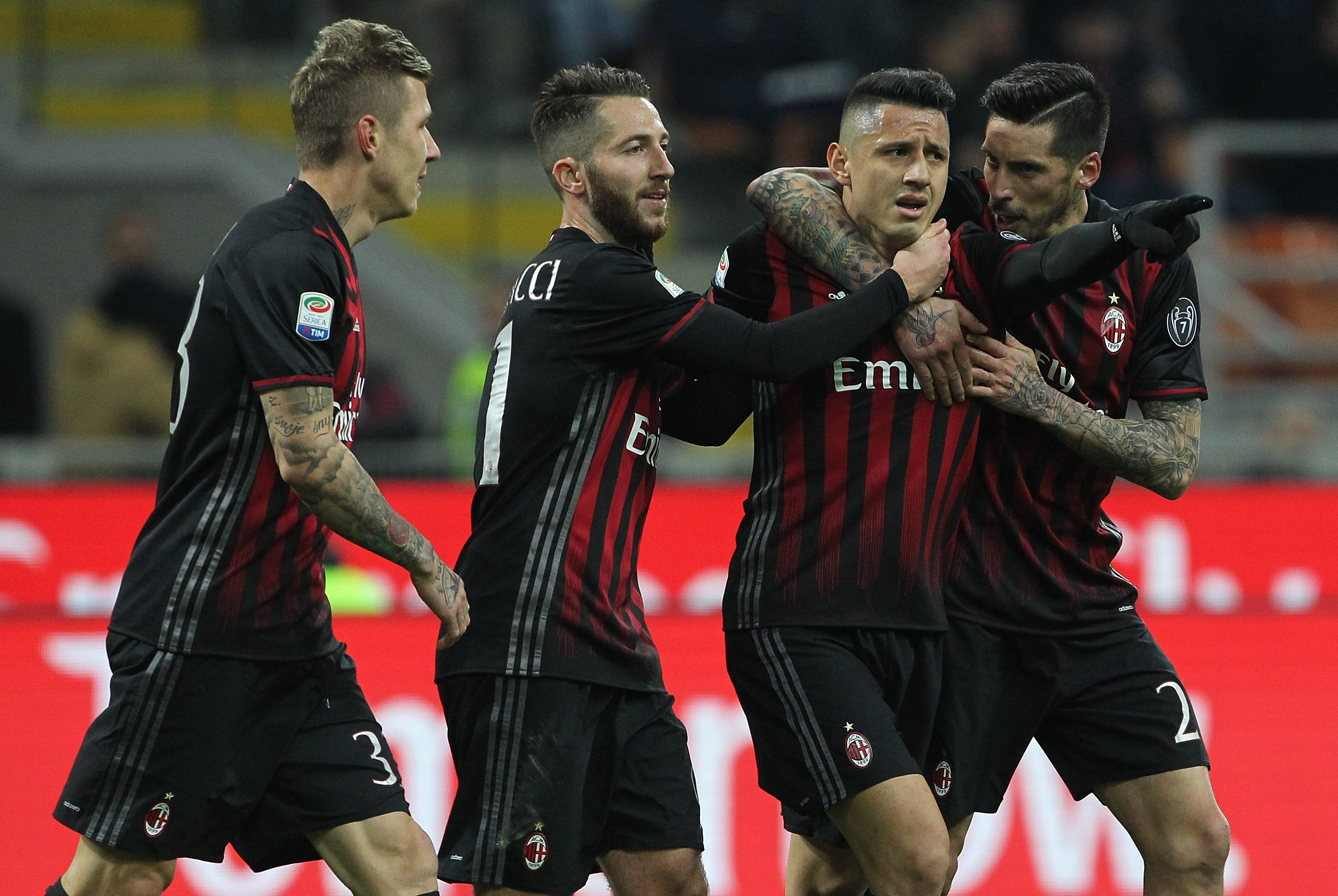 Only a few minutes later and the Flying Donkeys of Chievo have not given up but seem to have misplaced their shooting ability. What will easily go down as the miss of the season, Cacciatore hits the cross bar from two yards out and Donnarumma was on the ground on the opposite side of the net. Only a tap was necessary but instead he went for disaster.

A very bizarre and fun game to watch, Milan will take the three points and move into 5th place in the league temporarily as Lazio and Inter are yet to play and could regain their spots by tomorrow.