AC Milan stages a stunning 10-minute second-half fightback to come from a goal behind and beat Olympiacos at San Siro.

A neat header from Guerrero put the visiting side 1-0 up against the run of play, and the Rossoneri were wasteful but dominant in their search of a reply.

With less than 25 minutes to go they became clinical, with substitute Patrick Cutrone netting twice and Gonzalo Higuain getting a deserved goal in a riveting 10-minute spell.

Real Betis’ win over Dudelange in Seville means that the Diavolo stay top of their group and move five points clear of third place with a 100% record.

Milan briefly thought they had taken the lead in the sixth minute when Samu Castillejo tapped home a Giacomo Bonaventura flick, but the Spaniard was rightly flagged offside, with question marks over whether he had to touch Jack’s header which appeared goal-bound.

However, it was the away side who took the lead as Guerrero nipped in at the near post to meet a pinpoint cross with perfect contact and beat Pepe Reina with a powerful header.

The Rossoneri set about responding, and Gonzalo Higuain had a pair of chances before the break.

Firstly, the Argentina held off a defender and managed to get a quickfire shot away, but Jose Sa in the Olympiacos goal saved with his knee.

Following that, a low ball was rolled across the area towards the penalty spot, though the ball was a yard behind Higuain who would have had the simple task of slotting home had he been in the right position. 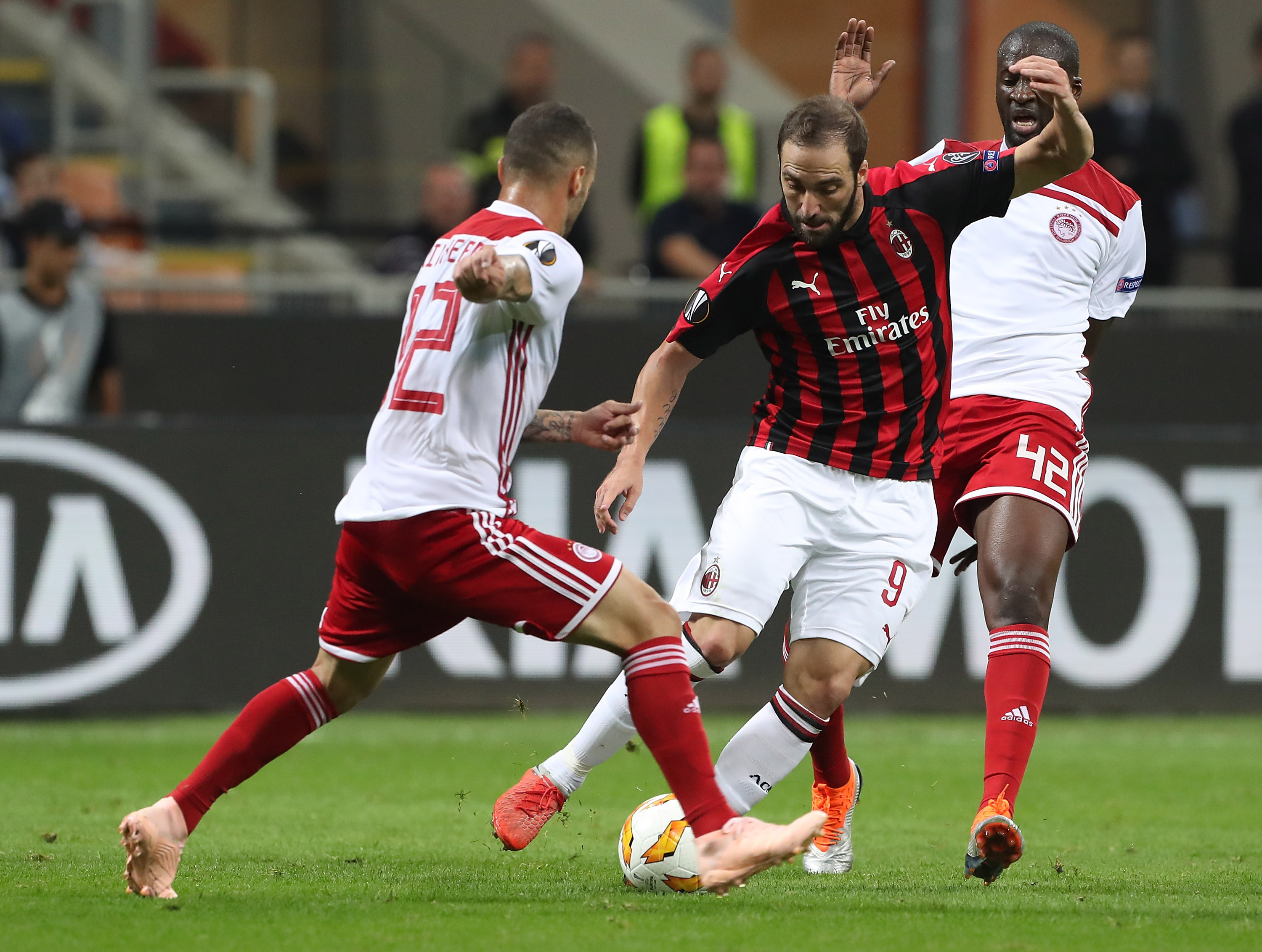 Cristian Zapata then had a huge chance from a corner, rising above Cisse but mistiming his jump to head over from six yards.

Sa was called into action early in the second half as Suso cut in from the right side, unleashing a shot that was deflected but resulted in a fairly comfortable save.

Moments later corner wasn’t cleared by Olympiacos and the Spain international had another chance to shoot; this time his effort found the side netting.

Substitute Patrick Cutrone was inches away from getting on the end of a teasing Suso cross, but the ball drifted out for a goal kick as desperation began to grow.

With just over 20 minutes left, Milan found their equaliser. A pinpoint cross from Ricardo Rodriguez found the head of Cutrone, who provided a perfect glance which saw the ball land in the top corner.

Six minutes later and Gennaro Gattuso’s side had a deserved lead. A Rossoneri break saw Hakan Calhanoglu feed Gonzalo Higuain, who in vintage fashion cut inside smartly and slotted past Sa to complete the turnaround.

Minutes later it was 3-1 as Calhanoglu again was instrumental; the Turkey international sliding a teasing ball across the edge of the six-yard box for Cutrone to thump home from close range and put the game beyond doubt.

Calhanoglu almost got on the scoresheet himself with the last kick of the game as he volleyed a neat Borini flick goalwards, but it agonisingly struck the right post before the referee’s whistle blew for the final time.