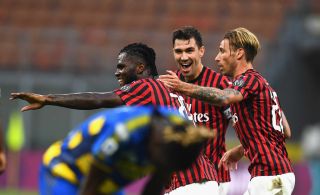 AC Milan 3-1 Parma: Confident Rossoneri come back from behind to continue positive run

AC Milan collected yet another three points at the San Siro and continue their positive post-lockdown run.

Milan started off the match in a proactive manner and it was clear that Stefano Pioli’s men wanted to dominate Parma at the San Siro. Ibrahimovic and Theo Hernandez had the first minor chances of the match, but both shots went wide.

The Rossoneri continued with their positive approach and were clearly the more threatening side, while Parma’s offensive attempts were cancelled out by Milan’s defenders.

In the 21st minute of the match, Milan almost took the lead, but Romagnoli’s header from a corner kick hit the post. Later on, Bonaventura scored after combining with Theo Hernandez and Ibrahimovic, but his goal was ruled offside by the referee.

Milan continued combining well and looked very good in the build-up, but in the final piece of the puzzle was still missing. Meanwhile, Parma’s attackers were very imprecise on Milan’s half and were unable to create any real opportunities.

Towards the end of the half, however, Parma created their first real chance of the game, but Gervinho didn’t manage to score. But several minutes later, Jasmin Kurtic managed to do what the Ivorian could not a couple of minutes later and scored with a nice shot off Grassi’s assist, scoring the opener at the San Siro.

Theo Hernandez could have responded quickly to Parma’s shock goal, but face-to-face against Sepe the French fullback hit the goalkeeper’s body with his shot.

Despite Milan’s pressing, Pioli’s men were unable to score, while Parma took advantage of one of the Rossoneri’s few weak moments of the half and managed to take the lead ahead of the second half.

At the beginning of the second half, Davide Calabria replaced Andrea Conti on the right side of the defence.

The team continued with their positive approach in the second half and were rewarded soon, as Franck Kessie equalized for Milan in the 55th minute of the match with an incredible long-range effort.

In the 57th minute of the match, Ismael Bennacer replaced Lucas Biglia in the middle of the field.

And immediately after, Milan managed to turn around the match, as Alessio Romagnoli scored his first goal of the season off a fantastic cross from Hakan Calhanoglu from a freekick.

In the 61st minute, Ante Rebic replaced Rafael Leao. Even after this change, Milan continued playing well and were looking for more goals in Sepe’s net.

However, Parma’s moment came several moments later, as Kulusevski and Inglese had big opportunities. In Kulusevski’s case, the crossbar saved the Rossoneri, while in the second case, Donnarumam came to the rescue with a great save.

However, Milan responded very quickly to Parma’s dangerous moment. In the 77th minute, Bonaventura and Calhanoglu combined well and the latter scored the third goal for the Rossoneri with a fine shot in the left corner of the net.

In the 81st minute of the match, Stefano Pioli made a double change, replacing Calhanoglu and Theo Hernandez with Krunic and Diego Laxalt.

And in the 84th minute, it could have been four for the Rossoneri, but Ibrahimovic did not manage to put the ball in the net off Kessie’s cross. A few minutes later, Rebic could have also scored but failed face-to-face against Sepe.

Milan ended the match with the same confidence as they had throughout the entire match to keep the three points at home.