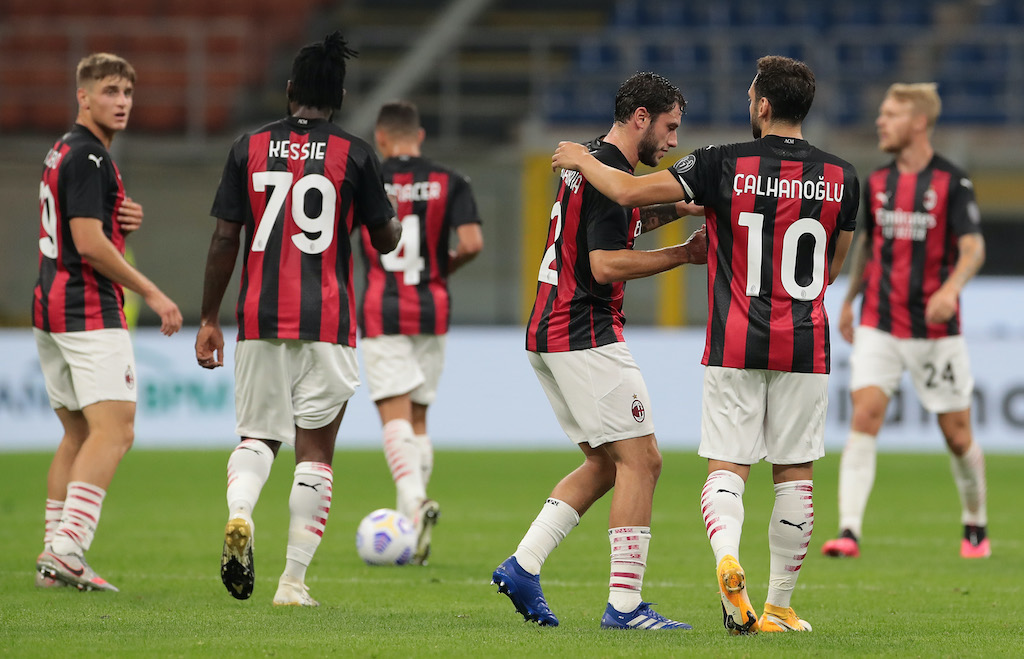 AC Milan secured their progression to the Play-Off round of Europa League qualification with a frantic 3-2 win over Bodo/Glimt.

The Rossoneri didn’t have it all their own way at San Siro as Junker gave the Norwegian league-leaders an early lead, but they did roar back as Hakan Calhanoglu scored twice and Lorenzo Colombo scored on his first senior start.

A screamer from Jens Petter Hauge made it a nervy finish to the game for the hosts but they hung on in the end, setting up a one-off knockout game next Thursday against Portuguese side Rio Ave – who beat Besiktas – to reach the Europa League group stages.

Head coach Stefano Pioli had to juggle seven different selection problems ahead of the game, with confirmation having arrived from the club that Zlatan Ibrahimovic and Leo Duarte both tested positive for Coronavirus.

It was Milan who caused their opponents the first bit of difficult in the sixth minute as a ball over the top from Hakan Calhanoglu almost found Lorenzo Colombo, who was making his first senior start for the Rossoneri. The Glimt goalkeeper Haikin came rushing 30 yards off his line to clear but it fell to Calhanoglu, who shot well wide.

Gianluigi Donnarumma was called into action for the first time moments later as Davide Calabria did well to jockey Hauge, whose tame effort after cutting inside was easily saved.

It was the away side who took the lead as they perfectly showed exactly what they are capable of. A move down Milan’s right side ended with Hauge pulling the ball back to Junker, who made no mistake firing past Donnarumma first time at the near post.

However, their lead wasn’t to last for long, in fact it would take just over 60 seconds for Milan to get back on terms. A threaded ball from Bennacer found Calhanoglu, who turned and fired past Haikin with a venomous effort from 20 yards.

Milan used the momentum of the equaliser to get on top in the game, and just after the 20-minute mark they should really have taken the lead. Calhanoglu recovered the ball inside the Bodo/Glimt box, but the Algerian shot straight at the keeper when more composure was needed.

Just a couple of minutes later Calhanoglu was in the centre of the action again, this time firing a rocket of an effort wide of the near post after drifting into space.

Colombo came very close to opening his professional account for Milan in the 26th minute as the centre-forward trapped a feed before turning and firing at Haikin, who saved well. From the resulting corner the Rossoneri carved the Norwegian side open again, but again the 25-year-old stopper was equal to Calhanoglu’s effort.

In the 32nd minute, there was a moment to remember for Colombo. An attack down the left flank resulted in Theo Hernandez pulling the ball back into the box and it was diverted to the far post by Calhanoglu, who gave the 18-year-old the easy task of firing into an unguarded net as Haikin had gambled on the cross.

Having ended the first half on the front foot, the home side picked up right where they left off and the high back line began to pay off with lots of timely interventions resulting in counter-attacks for the Rossoneri.

Five minutes into the second period, Milan got some breathing room with a third goal. A corner from the right was struck perfectly to the edge of the box where Calhanoglu was on hand to volley into the bottom corner with perfect technique, making it 3-1.

However, just five minutes later the lead was cut back to one, and it was Hauge who was again the architect. This team he got his name on the scoresheet, firing past Donnarumma with a stunning strike from 25 yards that was a laser into the top left corner.

The first change came not long after the visiting side’s goal, with Daniel Maldini coming on for the goalscorer Colombo.

Bodo/Glimt continued to threaten on the break, and Zinckernagel should have tested Donnarumma just before the hour mark after he had easily ghosted past Gabbia into the box.

The Diavolo had a couple of half-chances to extend their lead when Gabbia’s stooping near-post header from a corner was cleared two yards off the line, and after Bodo/Glimt broke Milan countered again with Theo Hernandez seeing his effort saved at close range after he was slid through on goal.

Daniel Maldini thought he had joined his Primavera team-mate Colombo with a goal as he calmly finished a one-on-one, but the offside flag rightly went up.

In the 65th minute Milan made their second change, with Rade Krunic coming on in place of Castillejo.

The away side continued to probe for en equaliser, and Kessie was required to make a vital intervention as the right side of defence switched off allowing Hauge to pull the ball back to the penalty spot.

It was inches away from being 4-2 win 12 minutes left on the clock, as a Krunic-led breakaway resulted in Saelemaekers lifting the ball over the onrushing keeper, but Brede Moe cleared off the line heroically.

Before play restarted, Milan made another change as Sandro Tonali came on for Bennacer.

Bodo/Glimt somehow continued to catch Milan on the break, and Calabria did well to recover and block a Solbakken shot from inside the box after he had been beaten by a beautiful ball.

Donnarumma was called into action from the resulting corner five minutes from time and made a fantastic one-handed save at his near post from a Saltnes header.

The visitors missed one more huge chance to level in the second minute of added time; Hauge feeding Saltnes inside the box who inexplicably fired over the bar when it seemed easier to hit the target, but Milan hung on.