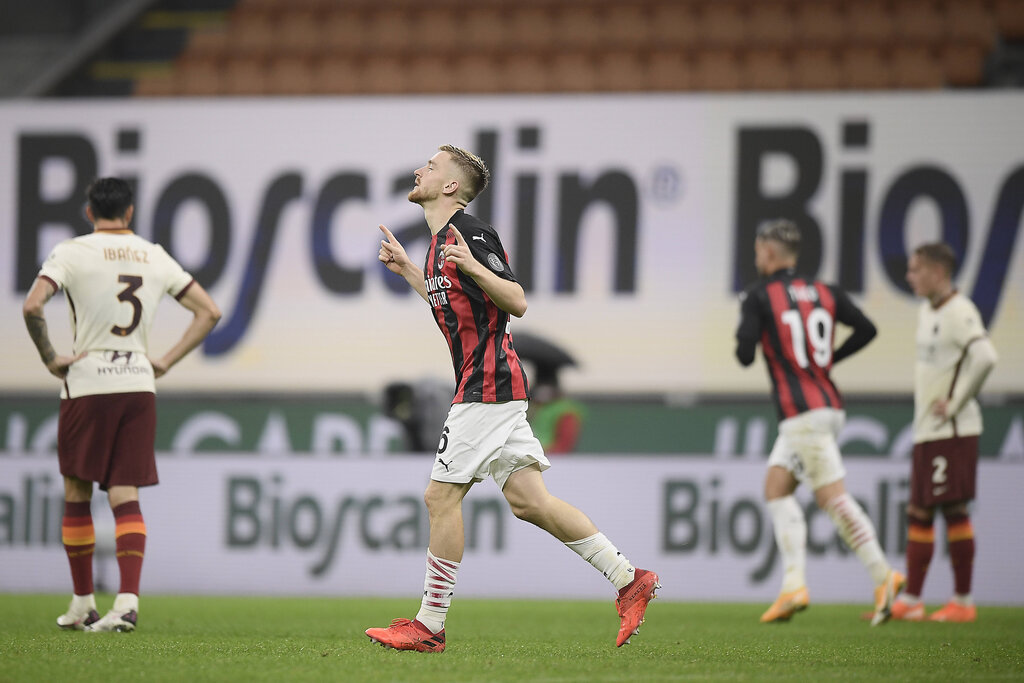 Milan hosted Roma in a the fifth round of Serie A with hopes of extending their winning run, but managed only a draw as the Giallorossi came back from behind three times.

The Rossoneri started off brilliantly, opening the scoring inside two minutes as Zlatan Ibrahimovic netted with an instinctive finish. However, Pioli could not use Donnarumma as the goalkeeper tested positive for COVID-19, and his replacement Tatarusanu was in fault for the equaliser.

The Rossoneri then managed to take the lead again through Alexis Saelemaekers only to be pegged back through a controversial penalty. Fortunately for Milan, the referee wasn’t finished yet as he awarded the home side a spot kick for a soft foul on Hakan Calhanoglu.

It was Zlatan who scored again, but then the Swede himself flicked a corner on to Kumbulla who scored a third for Roma and earned his team a point.

Zlatan Ibrahimovic was yet again on the scoresheet for his team bagging his third brace of the league season, and although he didn’t manage to with the man of the match in our ratings the Swede continued his incredible form having scored six goals in just three league starts.

The 39-year-old helped his team a lot in the build up as well and was one of the players that didn’t actually looked tired, which is quite surprising. Pioli will be hoping that Ibrahimovic keeps on doing what he does best as the schedule will get tighter in the coming weeks.

2. Rebic-Leao competition to be fierce

With the absence of Ante Rebic, Leao had another chance to prove himself and did well. Although there has been a lot left to be desired – mainly because of his huge potential – the Portuguese youngster looks more mature and efficient.

He has managed two goals and three assists thus far in four Serie A games including a pair of lovely assists against Roma. While Rebic had an impressive run of form last season he is yet to fully recover from his injury and will most likely need time to be at 100%.

And while Ante is waiting, Leao is impressing, meaning surely a fierce competition will occur soon for that starting spot on the left.

The result may well be regarded as disappointing by the Rossoneri as all three of Roma’s goals looked avoidable, but Pioli’s players lost focus in crucial moments.

Firstly, Tatarusanu was clumsy to go out of his goal and let Dzeko to an open goal. Secondly, while a controversial penalty was given against Bennacer, the Algerian himself could have been more careful in the penalty box and finally Zlatan was trying to clear the ball in a very weird kung-fu way instead of just using his head and keeping it simple.

While not discrediting Roma for their effort, Milan’s two goals came from the amazing work of Leao to take on players and provide a defence-cutting pass while Roma’s goals came of individual errors.

The tight schedule is starting to take a toll on some players as Theo Hernandez looked very tired for the majority of the game.

The Frenchman didn’t look like his usual self and his body language was sort of indicating his unwillingness to involve himself in the game. There was little effort going forward, but we can’t really blame Theo as he has had little to no time off the pitch.

With the upcoming easier fixtures it might be a good idea to get Dalot into some action and rest Theo in order to have him up and running against Napoli in a few weeks time.

While Saelemaekers did manage to put his name on the scoresheet he didn’t really make enough of an impact during the rest of the game.

Yes, the Belgian has been doing well in this Milan side so he is not the reason that the right side needs reinforcements, but rather Castillejo is the one that is failing to make any impact this season and is hurting the depth of the right wing spot.

Brahim Diaz is clearly preferred as an attacking midfielder, and while Florian Thauvin’s name is doing the rounds in the media Milan fans will be hoping to indeed land the World Cup winner and solve a major problem depth wise in the squad.

The left side has Rebic, Leao and Hauge while the right has only Alexis and Samu, who are not exactly the game changers you want on the wing.