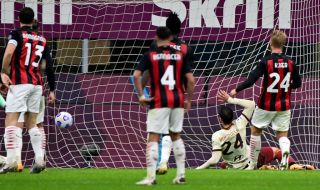 AC Milan threw away a lead three times against Roma on Monday night, eventually drawing 3-3 in a thrilling game at San Siro.

Zlatan Ibrahimovic scored inside the opening two minutes with an instinctive finish, but Edin Dzeko responded to his opposite number by taking advantage of a misjudgement by Ciprian Tatarusanu to level.

Alexis Saelemaekers thundered home to make it 2-1 within minutes of the restart after excellent work by Rafael Leao, yet a controversial penalty saw Roma equalise again through Jordan Veretout.

The referee then gave another spot kick up the other end which Ibrahimovic tucked away, however again Milan let the lead slip as Marash Kumbulla bundled home a third leveller.

Milan knew they would stay top regardless of the result, but they missed the chance to go four points clear and instead open up a two-point gap on Napoli.

Stefano Pioli made six changes from the team that won 3-1 against Celtic on Thursday as Davide Calabria took his spot back from Diogo Dalot, Ismael Bennacer came in for Sandro Tonali and Alexis Saelemaekers, Hakan Calhanoglu and Rafael Leao completed the trident behind Zlatan Ibrahimovic.

Gianluigi Donnarumma tested positive for Coronavirus on the morning of the game and therefore missed out, as did Jens Petter Hauge, with Ciprian Tatarusanu making his first competitive appearance for the club between the posts.

In all honesty it couldn’t have been much easier for the Rossoneri to take the lead as they instantly cut through Roma with their first attack of the game. Rafael Leao found space to run into coming in off the left and lifted a perfect ball in behind the Giallorossi’s three-man defence, where Ibrahimovic was waiting to toe-poke past Mirante first time.

😍 That didn't take long, what a pass by Leao!pic.twitter.com/fiPfoV4HoP

Roma’s danger man going into the game needed no introduction in Edin Dzeko, and he caused panic in the Milan box when he burst through inside the ninth minute before being eventually crowded out as Kjaer saw it out for a corner.

A nice interchange between Mkhitaryan and Pedro exploited the same areas of Milan’s defence – the gap between Calabria and Kjaer – but the latter intervened once again before the former Chelsea man could get a shot away.

However, from the resulting corner the away side levelled and it was a moment to forget for Tatarusanu. The Romania international came to try and claim the cross, but got nowhere near the ball and Dzeko was allowed to head into an open net after getting the better of Romagnoli.

Mirante was then called into action in the 22nd minute as Calhanolgu launched his first effort towards goal; the Turkey international firing from around 20 yards out and drawing a fairly comfortable low save in the end.

Mirante was left sprawling again by Calhanoglu when just before the half hour mark he whipped in a dangerous in-swinging corner from the left side that he flapped clear. From the resulting set piece Theo Hernandez was teed up on the edge of the box but saw his low first-time shot deflected wide, and then Mirante again was at full stretch to deny a Romagnoli header.

With their fourth corner in succession Milan came the closest yet, with Kjaer meeting Calhanoglu’s corner on the penalty spot and hitting the far post with his glancing header as everyone stood still.

Tatarusanu was then called into action twice at the other end as the game began to open up. Firstly he denied centre-back Ibanez with an unconventional save from his low shot, and then punching away a fierce Pellegrini strike that was destined for the far corner.

The game became more and more open towards the end of the first half, and from a Roma corner Milan squandered a superb counter-attacking chance as Leao chose to pass wide to Theo from a four-on-three breakaway, and the Frenchman pulled a poor pass back into the box.

Mirante was called into action once again moments later as Milan won a free-kick just beyond the edge of the box as Ibrahimovic was clattered, and Calhanoglu whipped a shot through the wall that was palmed away for a corner.

Milan almost had a chance straight from kick-off in the second half as Ibrahimovic went up for a header that ended up being a perfect flick in behind for Leao, but the Portuguese forward spurned the opportunity with a bad first touch.

After scoring less than two minutes into the first half, the Rossoneri did the same again and Rafael Leao deserved all of the credit. A fantastic run by the left winger saw him win the race to the byline and he cut a perfect ball back to Saelemaekers, who was waiting to thump home with the ball on a plate.

🔥 Great finish by Alexis, but what a display by Leao! pic.twitter.com/qYJiQPbSBS

Milan were nearly punished for a sloppy giveaway inside Roma’s half while firmly on top in the game as Theo surrendered possession; the Giallorossi’s swift break ending with Dzeko firing over at the far post from Mkhitaryan’s feed.

As expected Fonseca’s side started to wrestle back some of the momentum in their search for an equaliser, and Mancini arguably should have done a lot better when he headed over from a corner.

There was a moment of real confusion moments later though as the referee Piero Giacomelli pointed for a penalty after Bennacer was stood on in the box, with no consultation with the Video Assistant Referee. After a lot of protests, Veretout tucked the penalty past Tatarusanu who dived the right way but couldn’t get near the ball that was immaculately placed.

In response to the equaliser, Pioli brought Rade Krunic and Samu Castillejo off the bench in place of Leao and Saelemaekers.

Milan had their own penalty shout up the other end with 15 minutes to go as a ball towards Ibrahimovic appeared to strike the arm of Mancini, but Giacomelli gave a booking to the striker instead.

The home side continued to push for their third lead of the game and the goal was gaping for Calhanoglu as a knock-down from Krunic found him in space inside the box, but the former Leverkusen man saw his effort blocked by Ibanez.

One has to wonder if Giacomelli felt the need to even things up at the other end as Calhanoglu was bundled over inside the box albeit softly as a penalty was immediately awarded. Ibrahimovic grabbed the ball and despatched the spot kick into the bottom left corner, sending Mirante the wrong way to make it 3-2.

💪 Ibrahimovic bags his brace with a good penalty. pic.twitter.com/M3WJZ2NJ9r

Despite this, the Rossoneri still couldn’t hold on to their lead. A corner from Roma’s left side was flicked on at the near post by Ibrahimovic who couldn’t get solid enough contact to clear, and Kumbulla ghosted in at the far post to convert from close range and make it 3-3.

The Diavolo were inches away from making it 4-3 as a corner was met by the glancing header of Kessie, with Mirante making a fantastic reaction save.

There was one final huge chance for Milan to snatch all three points and again it came from a corner; Alessio Romagnoli inexplicably missing the target from six yards out against his former club.