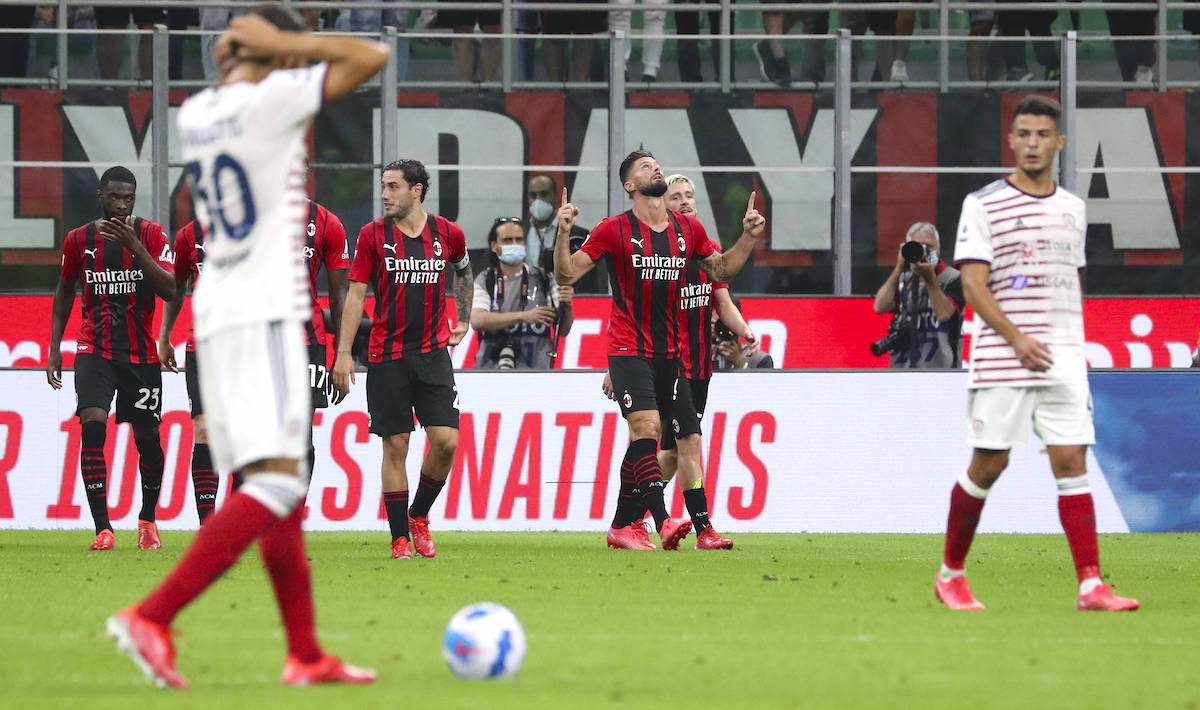 After kicking off the season with a narrow 1-0 win against Sampdoria, Milan were a lot more convincing against Cagliari at the San Siro managing a comfortable 4-1 win.

The game started off in fine fashion for the Rossoneri after a wonderfully taken free-kick by Sandro Tonali to open the scoresheet. Fortunately, it only took Rafael Leao 2 minutes to give his side the advantage yet again and it was only getting better after that with Giroud picking up a brace.

It is a great start to the season heading into the break, and hopefully after that Stefano Pioli will have Franck Kessie and Zlatan Ibrahimovic to lean on once again against Lazio, Liverpool and Juventus.

It’s been a while now since someone with the No.9 on the back of their shirt has had success with Milan and the fans understandably labelled the number to be cursed. Fortunately for them and for the management, Olivier Giroud is looking like the right man to make debug that myth as the Frenchman had a good pre-season and managed a brace against Cagliari with his overall game looking very promising.

The striker seems to be a leading figure in the dressing room as well and while both him and Ibrahimovic are heading towards the twilight of their careers, for the moment they seem to have enough fuel in the tank to keep the goals coming.

Finding continuity and gaining confidence will be key for some youngster players in the squad that are due to have a breakthrough season, with two of them being Rafael Leao and Brahim Diaz.

The Portuguese picked up a goal, although with a bit of luck involved, and Brahim racked up an assist, but more importantly the two were very involved in the game and caused a lot of trouble for the opposition and especially in the first half where the high tempo was just too much for Cagliari to handle.

The two will need to keep this form going and establish themselves firmly in the starting XI, but the start is surely promising and if they do keep up the good work Milan will be in a good spot even if they fail to make a last minute signing.

💥 A lively performance and a goal thanks to @Brahim's backside 😂

After a rather unconvincing performance against Sampdoria, Theo Hernandez really took it to the next level this time out with Cagliari struggling to stop him.

It was the Theo all Milan fans are used to seeing on the pitch and the hopefully the Frenchman can improve on that just in time for the big games after the international break, with his national team call-up a big confidence booster of course.

Kessie and Bennacer have missed the beginning of the campaign, and a lot of fans were a bit worried at the fact that the double pivot will consist of Tonali and Krunic. The duo were just about good enough against Sampdoria in week 1, but against Cagliari it really was something different.

The former scored a superb free-kick to open the scoring, that being his first goal for Milan, and he also had an outstanding game showing just how much talent his possesses.

⚽️ A first goal for the club that means the world…

His partner in crime – Krunic – also had a rather surprisingly good game as the Bosnian did all the dirty work and was really impressive at the base of what at times functioned as a midfield three.

With the signing of Bakayoko, Krunic will most like be a fifth-choice option, but if he keeps up performing like that he truly will bring the luxury depth Pioli will need in a very demanding season from a schedule point of view.

💪 Another assured performance at the based of the midfield.

Alexis Saelemaekers has been amazing for this team, but only the Belgian will be not enough for Milan to play in three competitions. As of the time of writing it seems though as the Faivre deal is off and Milan may not actually sign another right winger.

Whilst Alexis is doing a very good job at the right wing and is more defensive minded, bringing balance to this Milan team, it seems rather unreasonable to have him and Castillejo on the right flank in a season with high expectations for Serie A and the desire to perform on a good level in the Champions League.

Time is ticking, and it is an issue that needs addressing. After all quality depth is key.