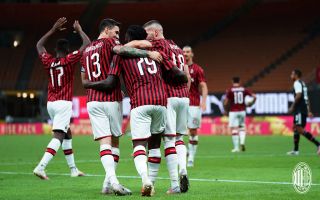 AC Milan produced a stunning second-half comeback at San Siro on Tuesday night as they recovered from 2-0 down to beat the league-leaders 4-2.

Nonetheless the Rossoneri roared back, netting three times in just over five minutes through a Zlatan Ibrahimovic penalty and two excellent strikes from Franck Kessie and Rafael Leao.

Stefano Pioli decided to make just two changes to his starting XI from the one that beat Lazio 3-0, with Lucas Paqueta and Ante Rebic coming into the starting line-up in place of Giacomo Bonaventura and Hakan Calhanoglu respectively.

Milan started well and established dominance in the midfield through the energy and intensity of Franck Kessie and Ismael Bennacer, and it was Alexis Saelemaekers who fired the first shot in the eighth minute from the edge of the box, albeit an easy save for Wojciech Szczesny.

There was a moment of panic a couple of minutes later when a Miralem Pjanic free-kick just outside the right corner of the 18-yard box was fizzed across goal with pace but it curled around the outside of the far post.

Cristiano Ronaldo had hearts in mouths in the 13th minute when he cut in from the left and fired an effort that looked destined to bend inside the far post, though Andrea Conti got a decisive foot in to ensure it sailed narrowly wide.

The game became cagey and scrappy with lots of tackles and tumbles from players of both sides, and Zlatan Ibrahimovic was the next to have a shot on goal just before the drinks break from just inside the area through a crowd of bodies; the result an easy low save.

The Swede fired at goal once again through Theo Hernandez’s cut-back in the 25th minute with what would have been a trademark finish, but Szczesny read it well and saved comfortably.

Juve began to take the game by the scruff of the neck again, and Simon Kjaer showed incredible commitment to put his head in the way of a dangerous looking strike from Danilo to divert the ball for a corner.

From the resulting set piece a near post flick from Ronaldo ricocheted off the head of Ibrahimovic and looped onto the roof of the net much to the relief of Donnarumma.

The last chance of the first half for the visitors saw some neat interplay between Higuain and Bernarndeschi result in the former firing a low shot destined for the bottom left corner, though Donnarumma read it well to sprawl and clutch the ball.

Ibrahimovic put the ball in the back of the net for Milan in the final action of the opening 45 minutes following a beautiful through ball, yet the goal was rightly flagged for offside as the 38-year-old didn’t quite time his run.

Pioli made a change at the interval with Paqueta making way for Hakan Calhanoglu.

It was the visiting side who got the opening goal inside the first two minutes of the second half, and it was an absolute corker from Rabiot. The Frenchman took the ball from his own half and – using Higuain’s decoy run – he fired the ball into the top left corner from the edge of the area giving Donnarumma no chance.

Just a few minutes later it was 2-0 as Cristiano Ronaldo notched goal number 26 in Serie A. A long ball over the top split Kjaer and Romagnoli in half as they both went for the same ball, and the Portugal international finished past Donnarumma despite him getting a fingertip on the ball.

Milan tried to force their way back into the game and a neat interchange saw Ante Rebic glance wide from Theo Hernandez’s deft near post cross, but the Croatian was booked as the referee Marco Guida inexplicably claimed it was a deliberate handball.

Shortly after that Saelemaekers made way for Rafael Leao in the second change.

Remarkably, from the same incident Guida then went to check the VAR monitor and gave a penalty to the Rossoneri as he adjudged Bonucci to have handballed Rebic’s effort. Ibrahimovic took on the responsibility and sent Szczesny the wrong way with a powerful spot kick.

Just moments later it was 2-2, with some lovely hold up play from Ibrahimovic finding Kessie inside the area and the Ivorian finished with aplomb after dropping his man with a faint.

Then remarkably, it was 3-2. Rafael Leao collected the ball as Guida played advantage for a foul on Rebic, and the Portuguese sensation took the ball into the area before poking home with a deflected effort.

Milan had produced a devastating spell of three goals in just over five minutes and they did not rest there, with Rebic drawing a save from Szczesny as the Diavolo looked to cause havoc on the break.

Giacomo Bonaventura came on for Zlatan Ibrahimovic which saw the Eintracht Frankfurt loanee move up front to try and stretch the back line, while Juve responded by bringing on Blaise Matuidi, Douglas Costa, Aaron Ramsey and Alex Sandro in the space of a few minutes.

The visiting side provided a reminder of the danger they pose with 13 minutes left as Daniele Rugani rose to meet a corner unmarked, with Donnarumma producing a sensational low save.

Unbelievably, just inside the last 10 minutes it became 4-2. Rebic continued his sensational scoring form in the most emphatic way, sweeping a ball inside the near post past a hopeless Szczesny after a bad giveaway from Sandro, which allowed Calhanoglu to get an easy assist.

Conti then made way for Davide Calabria and Rebic came off for Rade Krunic a minute later as the Juventus bench looked on shellshocked.

The away side continued to try and get a foothold back into the game with Bentancur placing an effort over the bar, but at the other end Juve’s keeper was called into action again to palm away a Calhanoglu free-kick from 35 yards out.

Ronaldo thought he had scored a second to make it 4-3 in the dying seconds, but the flag went up after his finish as he was five yards offside.

That would be the last meaningful action of the game as Milan wound down the clock to record what is without a doubt one of the most famous wins at San Siro in recent years.