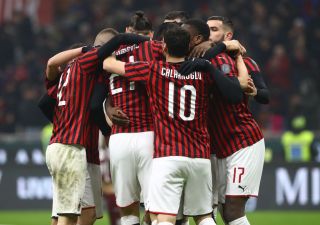 AC Milan completed a come back to beat Torino 4-2 after extra time and book their place in the semi-finals of the Coppa Italia on Tuesday night.

Giacomo Bonaventura got the scoring underway with a close range finish, but a double from Torino centre-back Bremer saw the away side leading until the first minute of added time at the end of the 90.

Hakan Calhanoglu – off the bench as Milan’s final substitute – equalised with a fantastically taken strike form distance, and he did the same again early in the second period of extra time to give Milan the lead.

Milan boss Stefano Pioli made four changes to the line-up which won in Brescia on Friday as Ante Rebic and Krzysztof Piatek got the nod up front. Giacomo Bonaventura started on the left in place of Hakan Calhanoglu, while Franck Kessie was rested as Rade Krunic came in.

Milan cut Torino open twice inside the opening seven minutes, the first time allowing Rebic to find space to shoot though his effort was well blocked, before Theo Hernandez was slid in behind moments later, though a vital interception denied Krzysztof Piatek an easy finish.

The Rossoneri looked threatening every time they went forward with Rebic in particular constantly involved, and he was the architect of Milan’s 12th minute opener. The Croatian found space to fire in a low cross from the left, and his ball met an unmarked Bonaventura who had the easy task of slotting into a virtually empty net.

There was a lull in proceedings as Milan seemed happy to sit deep and absorb Torino’s possession, but as the crowd erupted into applause in the 24th minute in memory of Kobe Bryant it was almost 2-0. A whipped shot from the edge of the box courtesy of Samu Castillejo was saved well at the near post by Salvatore Sirigu.

Milan had a huge chance to double their advantage in the 33rd minute as a cross from the right side courtesy of Andrea Conti found an unmarked Rebic, though he couldn’t get any power behind his header and it was directed straight at Sirigu.

Ultimately the away side would make the Rossoneri pay as centre-back Bremer bombed forward and was found by a perfect through ball from Simone Verdi, finishing like a centre-forward. Upon replay, it looked a very tight offside decision, but the goal stood and the game was level at 1-1.

Milan thought they had re-taken the lead a few minutes before the break as Rebic thumped the ball home from close range after a corner was flicked on, though he did so after Piatek was adjudged to have controlled the ball with his arm. Upon replay, it seemed to be a fair call.

Rade Krunic then had a big chance to make it 2-1 as Theo Hernandez whipped an inch-perfect ball to the far post, yet the Bosnian couldn’t get over the ball with his header as it went well over the bar.

Milan survived an anxious moment in the early stages of the second half when Simon Kjaer gave away a free-kick for a rash challenge, and the delivery that came in caused all kinds of problems as it bobbled around before eventually being cleared with Belotti waiting to pounce and seeing a shot blocked.

The home side then missed a huge opportunity at the other end as a well-worked short corner allowed Castillejo to fire in a perfect inswinging delivery which was met by Romagnoli, but the captain couldn’t keep his header down.

Just after the hour mark Pioli made his first change as Zlatan Ibrahimovic came on for Piatek, whose last action of the game – and maybe even in a Milan shirt – was to hit an effort from 50 yards out for a throw-in with Sirigu off his line.

Inside the final 20 minutes Milan fell behind and it was Bremer who was on the scoresheet once again. A teasing delivery from the left side from Ola Aina was met from close range by the centre-back, who had the easy task of glancing his header in from close range.

With 15 minutes to go Pioli made the decision to sub off Bonaventura in place of Rafael Leao as the Diavolo went in frantic search of an equaliser.

Just as it seemed as though a couple of late misses from Ibrahimovic would bid an end to Milan’s Coppa campaign, Hakan Calhanoglu – on as a final throw of the dice – hit a shot from the edge of the box which deflected into the top corner, sending the remaining fans into raptures.

The Swede still had time to miss a couple of decisive chances to steal the win in the final seconds; the best a chance from close range with the goal gaping courtesy of a Leao feed, the resulting effort over the bar just as against Brescia.

The Rossoneri had the first big chance in extra time as Sirigu was called into action to stop a shot for the goal scorer Calhanoglu after a fantastic counter led by Leao.

Milan missed yet another huge opportunity to re-take the lead as Hernandez found himself all alone through on goal after a fantastic ball in behind from Calhanoglu, but Sirigu rushed off his line to save spectacularly.

Given that it went to extra-time, Milan were allowed one more substitution and chose to bring on Franck Kessie in place of Rebic, who had run tirelessly for over 105 minutes.

With the first attack of the second period, Calhanoglu was once again the hero. The Turkey international was played into space down the left side and let fly from around 18 yards; Sirigu getting a hand to his shot but ultimately tipping it into the far corner to make it 3-2.

If the tie wasn’t settled by that goal, the moment Milan fans have been waiting for came two minutes later. A fantastic lay-off from Leao in the area allowed Ibrahimovic to step up and side foot his effort into the top right corner for his first goal in a Milan shirt back at San Siro.