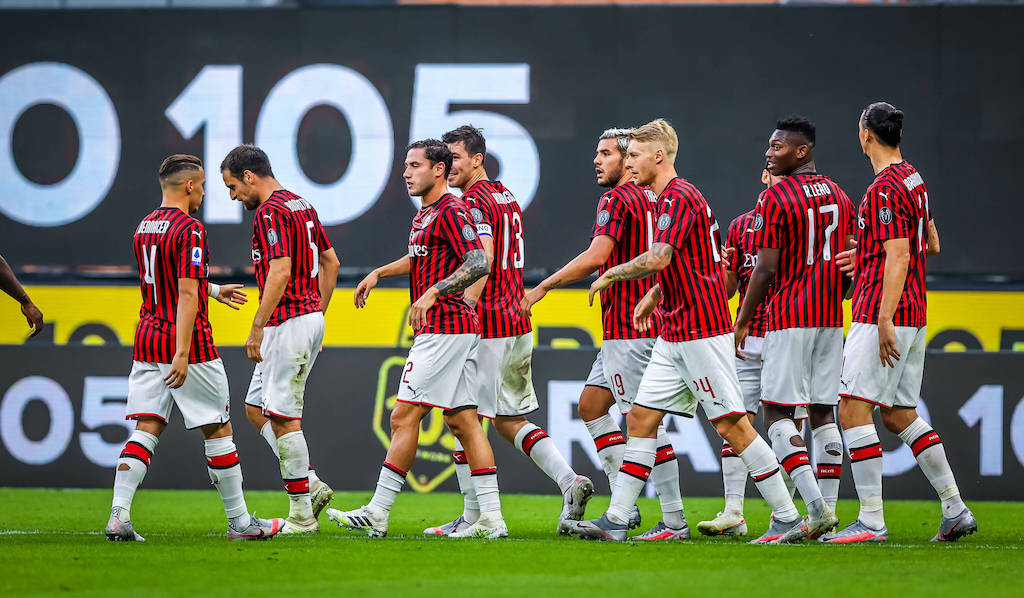 AC Milan produced yet another dominant display on Saturday night as they swept Bologna aside at San Siro, winning 5-1.

The result moves Milan a point behind Roma in fifth and eight points ahead of Sassuolo as their charge towards a European spot continues.

Milan had the first real opportunity of the game in the sixth minute as Rebic cut inside and fired straight at Skorupski after Zlatan Ibrahimovic had led the break.

They had another big chance not long after as some lovely interplay down the left found Theo Hernandez in space inside the box, however he also fired at the Bologna stopper.

The Rossoneri took the lead in the 10th minute as they finally made their early dominance pay. A marauding run by Theo Hernandez saw the Frenchman provide a perfect cut-back for Alexis Saelemaekers, who finished into the bottom corner after Ibrahimovic’s smart dummy.

It should have been 2-0 four minutes later as Milan carved Bologna open again, however this time Skorupsi was equal to Calhanoglu’s first-time effort after Rebic had cut the ball back to the Turkey international.

Milan doubled their advantage inside the 24th minute as Calhanoglu did get on the scoresheet. An incisive pass towards Theo from Franck Kessie was cut out but the ball cannoned towards Skorupsi, whose reaction clearance was cut out by the former Leverkusen man, this time showing the composure to bury the ball inside the left post.

Bologna fired their first shot on goal not long after the first cooling break, as Riccardo Orsolini’s dipping free-kick from 25 yards was easily saved by Gianluigi Donnarumma.

It was so close to being 3-0 in the 36th minute as Milan struck the upright. Saelemaekers stole the ball and carried the break forward, feeding Rebic down the right who cut the ball back to Kessie, but the Ivorian saw his effort deflected onto the right post and the ball cannoned away.

Milan continued to pepper the Rossoblu goal, and Kessie was close to netting again as he picked the ball up inside the area and shot from a narrow angle, drawing a smart save from Skorupski.

Just before half-time though it was Bologna who got themselves back into the game through as Tomiyasu produced some individual brilliance, cutting in from the right before firing an effort into the top left corner past a motionless Donnarumma.

The last chance before the break came from the foot of Kessie again; the midfielder rolling the ball past the near post from 20 yards after a pass from Saelemaekers who had led a counter.

The visiting side had the first half chance of the second half, as Orsolini blasted the ball over the bar having been found in space on the right side of the box, with options in the middle.

However, just moments later it was 3-1. Milan won the ball back in midfield and Calhanoglu rolled the ball into the path of Bennacer, who was allowed to stroll through into the box and fire into the bottom-left corner via a deflection.

Four minutes before the hour mark it was 4-1, and Ibrahimovic got his second assist of the night. The Swede rolled the ball into the path of Rebic, who given his remarkable recent form was never going to miss with his effort from the left side of the box, firing past Skorupski with a precise first-time shot.

A triple substitution followed not long after, as Rade Krunic, Rafael Leao and Giacomo Bonaventura came on in place of Ibrahimovic, Calhanoglu and Saelemaekers.

Milan twice came close to adding a fifth just after the hour mark, the first time through Theo Hernandez’s shot after another lung-busting run, the second occasion being a shot dragged wide from 20 yards by the substitute Krunic when he was in acres of space.

There was more chaos inside the Bologna box not long after as the ball ricocheted around before finding its way to Kessie, who took a touch before shooting and seeing his effort cleared off the line.

Leao became the latest player to fire at goal in the 76th minute as he stung Skorupski’s palms with a powerful drive, while at the other end Donnarumma did well to save a rare indirect free-kick from Santander after a back pass was wrongly called.

A double change followed from Milan as Lorenzo Colombo and Lucas Biglia came on for Ante Rebic and Ismael Bennacer respectively.

Davide Calabria added the finishing touch as he converted calmly from Leao’s feed to make it 5-1 after some fantastic interplay down the right flank.