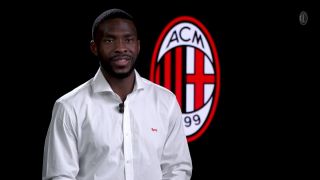 AC Milan’s technical chief Paolo Maldini has already confirmed that the Rossoneri are interested in a permanent deal for Chelsea’s defender Fikayo Tomori following his impressive performance with his temporary employers.

The Italian team has been impressed by Tomori’s performance since his move from Chelsea earlier in January, and now they’re planning to hold talks with his parent club for a permanent option, although they feel the price is too high.

Tomori joined Chelsea from his youth career in 2005 until he graduated to the senior team in 2016. The Canadian footballer progressed well through the club’s academy system and was part of Chelsea’s youth squad that recorded back-to-back wins in the FA Youth Cup and UEFA Youth League in 2015 and 2016. Tomori joined the first team as a substitute bench in 2016 alongside other academy stars like Kasey Palmer and Tammy Abraham, although he didn’t appear in their game against Liverpool.

The 23-year-old defender with Nigerian roots made his debut for Chelsea during their EPL game against Leicester in 2016, replacing Branislav Ivanovic during the second half. Tomori was also included in the US preseason tour, although he didn’t make any appearances. Nonetheless, he went ahead to sign a four-year contract with Chelsea before their 2016/2017 campaign.

Unfortunately, Fikayo Tomori has been struggling to get game time under Chelsea’s then-manager Frank Lampard. The rising center-back was given a chance to join another team on loan during the beginning of the season, but he chose to fight for his spot at Chelsea. However, that didn’t help the situation a lot. Tomori only made a single appearance before choosing to head out before Frank Lampard’s departure to usher in the new coach Thomas Tuchel.

After trying to fight for his spot at Stamford Bridge to no avail, Tomori was ready to head out to San Siro on loan during the January transfer window. The Canada-born defender will be forgiven for thinking of how his career at Stamford Bridge would have turned out if he was a little more patient, considering that Tuchel has given everyone a new start since his arrival. However, the center-back seems fully focused on impressing his new temporary employers at AC Milan.

With Tomori on their list, the Rossoneri appear to have better odds to win this season, which currently stands at 15.00 according to Betway. The 23-year-old made an immediate impression following his transfer to AC Milan, making a significant impact during his seven appearances in the Europa League, and Serie A.

Tomori has only started in three out of the seven appearances, occasionally finding himself behind Simon Kjaer and Alessio Romagnoli. However, Tomori is aware that he needs to be patient, especially with AC Milan fighting out Inter for the top spot, currently standing only six points behind.

Although he has only a few appearances here and there, Fikayo Tomori seems to be winning over AC Milan bosses. Already, director Frederic Massara is looking forward to retaining the defender permanently if he keeps impressing fans. According to Massara, Tomori has shown that he’s strong enough and has integrated well into the team. Massara is also convinced of Tomori’s quality despite the high purchase clause.

Tomori’s excellent performance has been easily notable by AC Milan’s management, including his contribution during their victory over Roma late last month. However, Milan’s director Maldini wants Chelsea to drive down their asking price of €28m before the club can consider activating his option-to-buy clause.

While speaking to the press, the Milan legend said that Tomori is a talented player known for his speed and intensity while playing. These skills are essential to AC Milan’s squad, and he came as the much-needed reinforcement this season. Maldini further appreciated Tomori’s good talent, although the AC Milan board will have to sit down with Chelsea and discuss whether to activate the buy-option clause, considering the high price.

Tomori follows many other Chelsea players’ footsteps, who have had to leave Stamford Bridge to get more game playtime. It’s a tradition for Chelsea to have many players on loan to get the regular minutes elsewhere that might be hard to get here. However, that helps Chelsea have players who can easily adjust in different circumstances and show their qualities with different clubs and cultures.

What’s next For Tomori?

While Milan remain skeptical about buying Tomori due to his high asking price, the player has proven his worth to the team. Nonetheless, Tomori’s future still looks bright, as the team is confident they’ll be signing the defender by the end of this season. The sale will also benefit Chelsea, who are currently looking for ways to extend Thiago Silva’s contract ahead of the upcoming season. The Blues are currently sitting at number four on the table, and they’re looking forward to taking home the Champions League title under Thomas Tuchel.