The latest edition of the popular EA Sports FIFA franchise has been released, and Milan fans can expect a different experience from the game.

No doubt Milanisti across the globe have been waiting to bust open the latest instalment of the famous series and play as their beloved Rossoneri, too.

With a whole host of new editions, Vincenzo Montella’s men are undoubtedly going to be more fun to play with. But just how does Milan’s squad shape up?

Gianluigi Donnarumma receives an upgrade of six overall on his base card from FIFA 17, a worthy upgrade for Milan’s No. 99.

Meanwhile, new addition Marco Storari sneaks into the gold category with what is a fairly solid card for a ‘keeper above 40 years of age, while Gabriel’s price on the market is high with him being one of the higher rated rare silver goalkeeper cards.

Antonio Donnarumma’s card is one that, let’s face it, you probably won’t be using.

Surprisingly, centre-back Gustavo Gomez has received a downgrade from his FIFA 17 card, moving from a 76 to a 75 overall. Luca Antonelli has dropped two rating points, while AC Milan veterans Cristian Zapata and Ignazio Abate remain as 78 overalls.

Alessio Romagnoli has moved to a rare gold card and has been upgraded from a 78 overall to a 79, while Gabriel Paletta has somewhat surprisingly been boosted two rating points.

New additions Ricardo Rodriguez, Mateo Musacchio and Leonardo Bonucci are unsurprisingly the Rossoneri’s three highest rated defenders with impressive cards, the latter of whom has a price currently retailing well over 30,000 coins (at the time of writing).

Niccolo Zanellato has his first FIFA Ultimate Team card and has been blessed with rare status, but Jose Mauri has not been so lucky having received a downgrade from 73 to 71. Manuel Locatelli has his second ever card, but received no change from his 74 rating from FIFA 17.

New additions Andrea Conti and Franck Kessie can both feel somewhat aggrieved however despite their upgrades of four and six respectively – the former Atalanta duo will have been hoping for ratings nearer 80 after stellar seasons with La Dea. The Ivorian does however have a “Ones to Watch” card, as seen in black above.

Fabio Borini, who arrived this summer from Sunderland, receives no change in his rating, while the same can be said for Riccardo Montolivo who remains a 78 overall. New signing Hakan Calhanoglu moves from an 80 in FIFA 17 to a 79, taking up the left midfield position.

Finally, Giacomo Bonaventura has moved up one overall from 82 to 83, and new Regista Lucas Biglia is the joint-highest rated midfielder, moving up from an 82 last season with Lazio to an 83 for FIFA 18.

Finally, we take a look at the forwards, where none of last season’s quartet of M’Baye Niang, Gianluca Lapadula, Carlos Bacca or Luiz Adriano remain.

Patrick Cutrone has his debut Ultimate Team card and somewhat harshly scrapes into the silver category with a rating of 65. Meanwhile, new signing Andre Silva started FIFA 17 as a 74, but received a winter upgrade to a 78 and remains at that rating for this edition. Don’t be surprised to see yet another upgrade come January, however.

Another new summer arrival in Croatia international Nikola Kalinic has seen an upgrade, moving from 80 to 81, while the biggest overall increase in the entire squad sees Suso move from 78 to 83 (as well as from RM to RW).

Now, let’s take a look at the best way to use our overhauled squad… 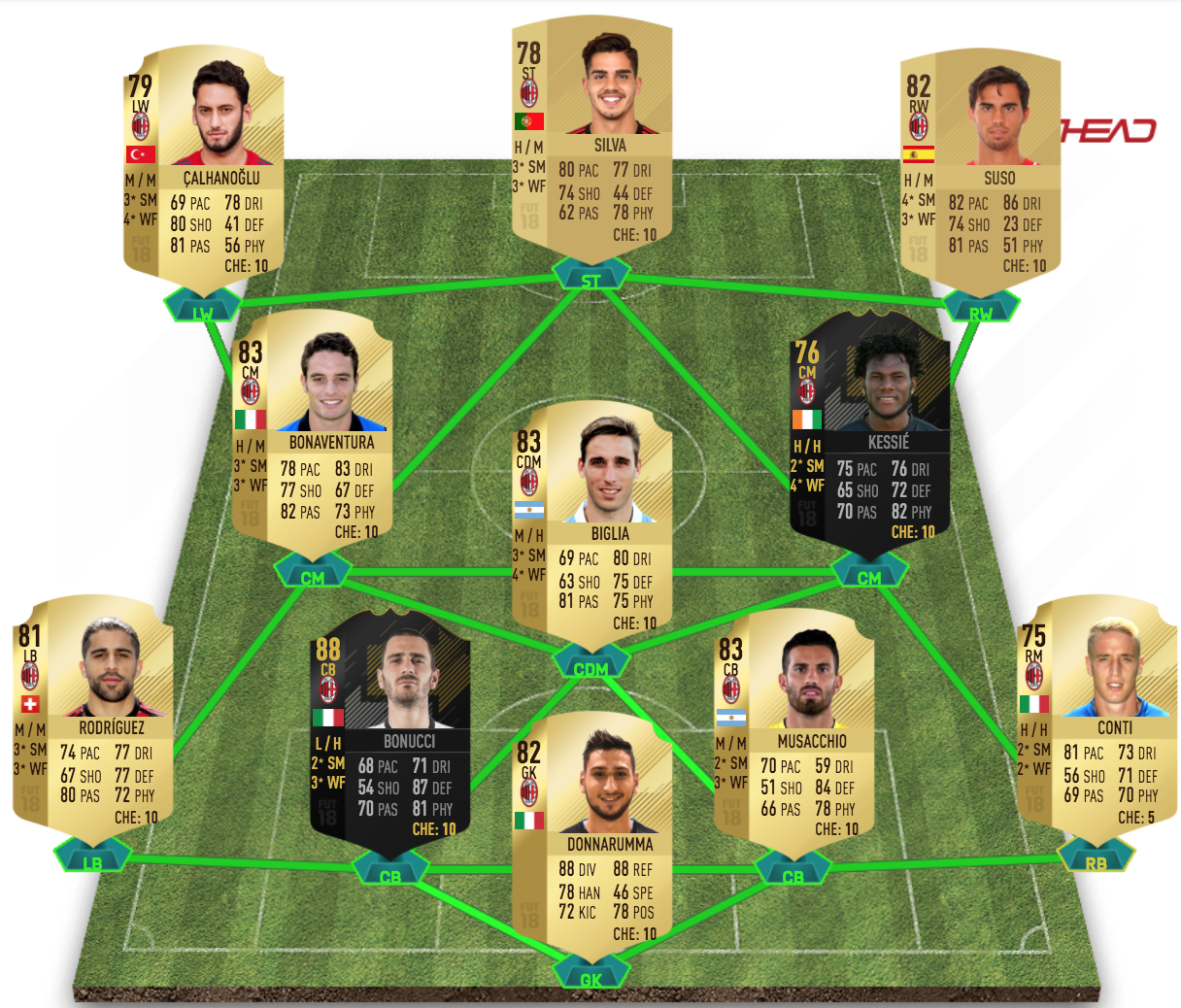 The first formation is one which, from experience, is useful across all formats of the game and not just Ultimate Team. The compact nature allows the player to boss the midfield with the physicality and offensive skill set of Biglia, Kessie and Bonaventura, while a defensive pairing of Bonucci and Musacchio will not be beaten often.

The speed and versatility of Conti and Rodriguez as full-backs allows for overlap play, with Suso and Calhanoglu up the respective flanks providing trickery and offensive threat. Andre Silva meanwhile works well as a lone striker; being able to drop in as a false nine or lead the line with his speed in counter-attacking situations. 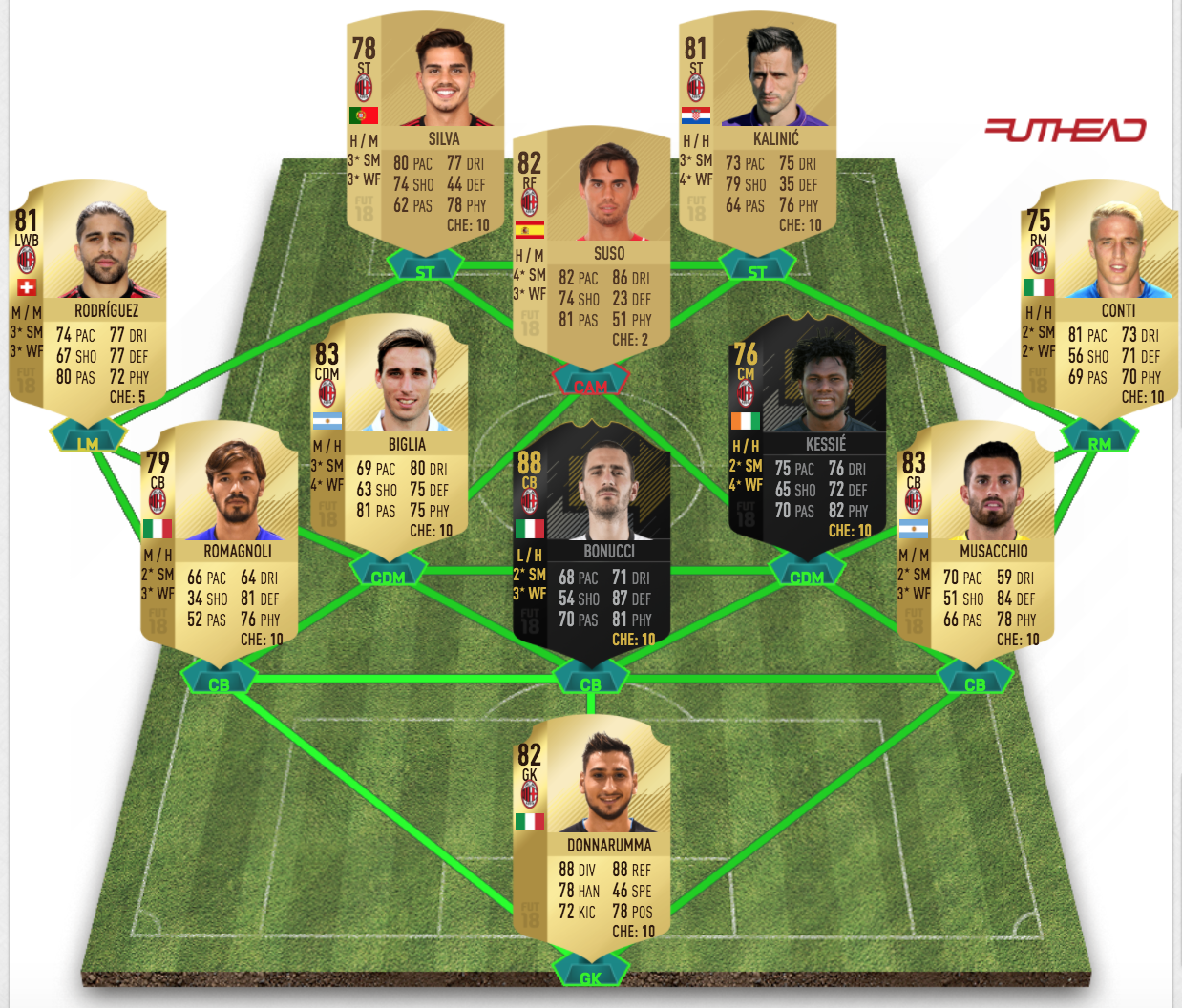 In true Montella style, the second formation which is useful for this team is the 3-5-2, or more accurately a 3-4-1-2.

This system is better for utilising Milan’s three quality central defenders, while a more rigid back line allows Rodriguez and Conti more attacking freedom to hurt opponents down the flanks. In addition, Kessie and Biglia playing slightly deeper as a pairing will allow the duo to dominate physically, while you can use from any one of a number of players to play as an attacking midfielder (Bonaventura, Calhanoglu, Suso etc.).

Finally, the front two of Andre Silva and Kalinic complement each other nicely, with the former being the speedster and the latter ensuring there is always a target for a cross.

That just about wraps it up, enjoy playing and be sure to send your best AC Milan FIFA goals to @SemreMilanCom!