The latest edition of the popular EA Sports FIFA franchise has been released, and we have all the updated ratings for Milan.

Milanisti across the globe have been waiting patiently for the release of the latest instalment of the famous series and play as their beloved Rossoneri.

With a whole host of new editions, Marco Giampaolo’s men are undoubtedly going to be much different to play with. But just how does Milan’s squad shape up?

Looking firstly at goalkeepers, Milan’s 20-year-old phenom Gianluigi Donnarumma has received a nice upgrade to 85 overall. On FIFA 19 he started as an 82 and was given an upgrade to an 83, but the latest edition recognises Gigio’s tremendous ability.

Pepe Reina was an 83 last season but has been downgraded by one to 82, still an impressive rating for the back-up.

Meanwhile, Antonio Donnarumma remains at a 66 overall, and Alessandro Plizzari has also stayed at a 66. 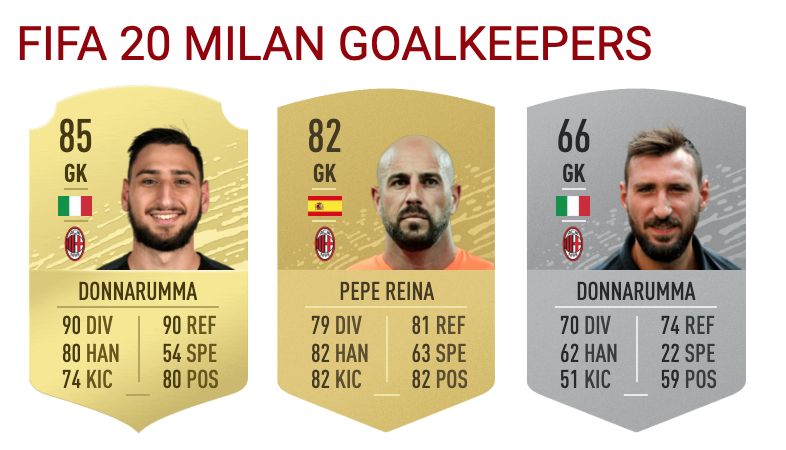 Matteo Gabbia comes in at a 62 for Milan in FIFA 20 as he was last year, while new summer signing Leo Duarte has received an overall rating of 72 having not been on last year’s version due to a licensing issue.

Theo Hernandez – another acquisition from the recent window – is rated at a 76 in the new game – as he was on FIFA 19, while Davide Calabria has remained as a 77 overall.

Rounding off the full-backs, Ricardo Rodriguez remains at an 80.

Two centre-backs are up next in Mateo Musacchio and Mattia Caldara – both of whom received ratings of 80 last year and somewhat unsurprisingly stay as 80s.

Club captain Alessio Romagnoli has received an upgrade though, moving up from an 82 to an 83. 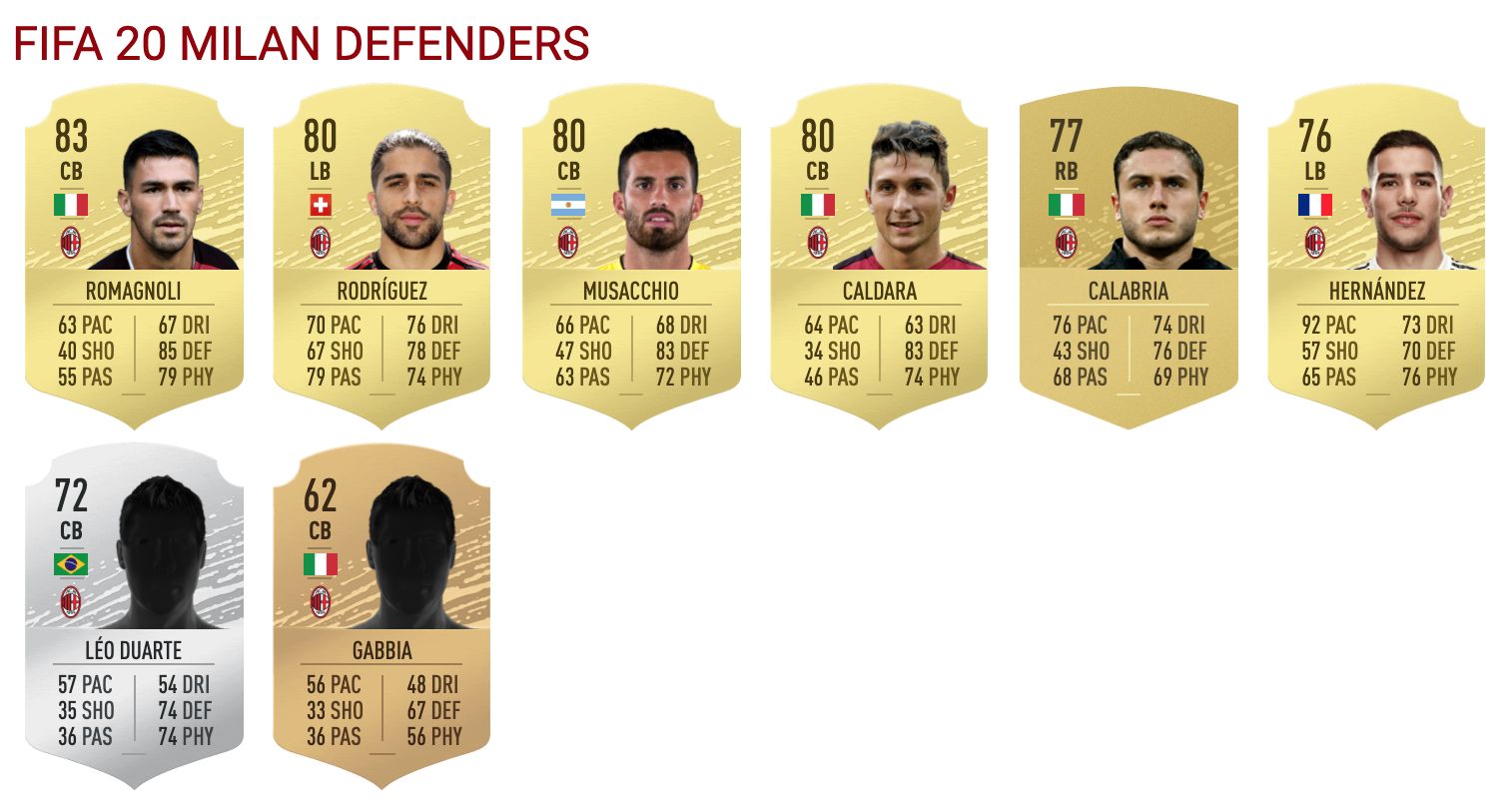 Two new signings kick off the midfield section for the Rossoneri, as former Empoli duo Rade Krunic and Ismael Bennacer are both rated at 74, having gone up from 73 and 71 respectively.

The rating for Bennacer is of course disappointing given his Player of the Tournament performance at the 2019 African Cup of Nations.

Andrea Conti has once again been listed as a right-midfielder by EA Sports, with his rating remaining as a 75, while a Milan card for Diego Laxalt is available despite his loan to Torino: the Uruguayan is a 78 overall.

Lucas Paqueta ended last season on a 79 overall and that is the rating he has been given to start FIFA 20, while Franck Kessie has moved up form a 78 to a 79.

Samu Castillejo has been put down as a right midfielder but has been given a significant downgrade from an 83 in FIFA 19 to an 80 in the new game.

Finally, central midfielder Giacomo Bonaventura has stayed as an 82 with Lucas Biglia dropping from an 83 to an 82. 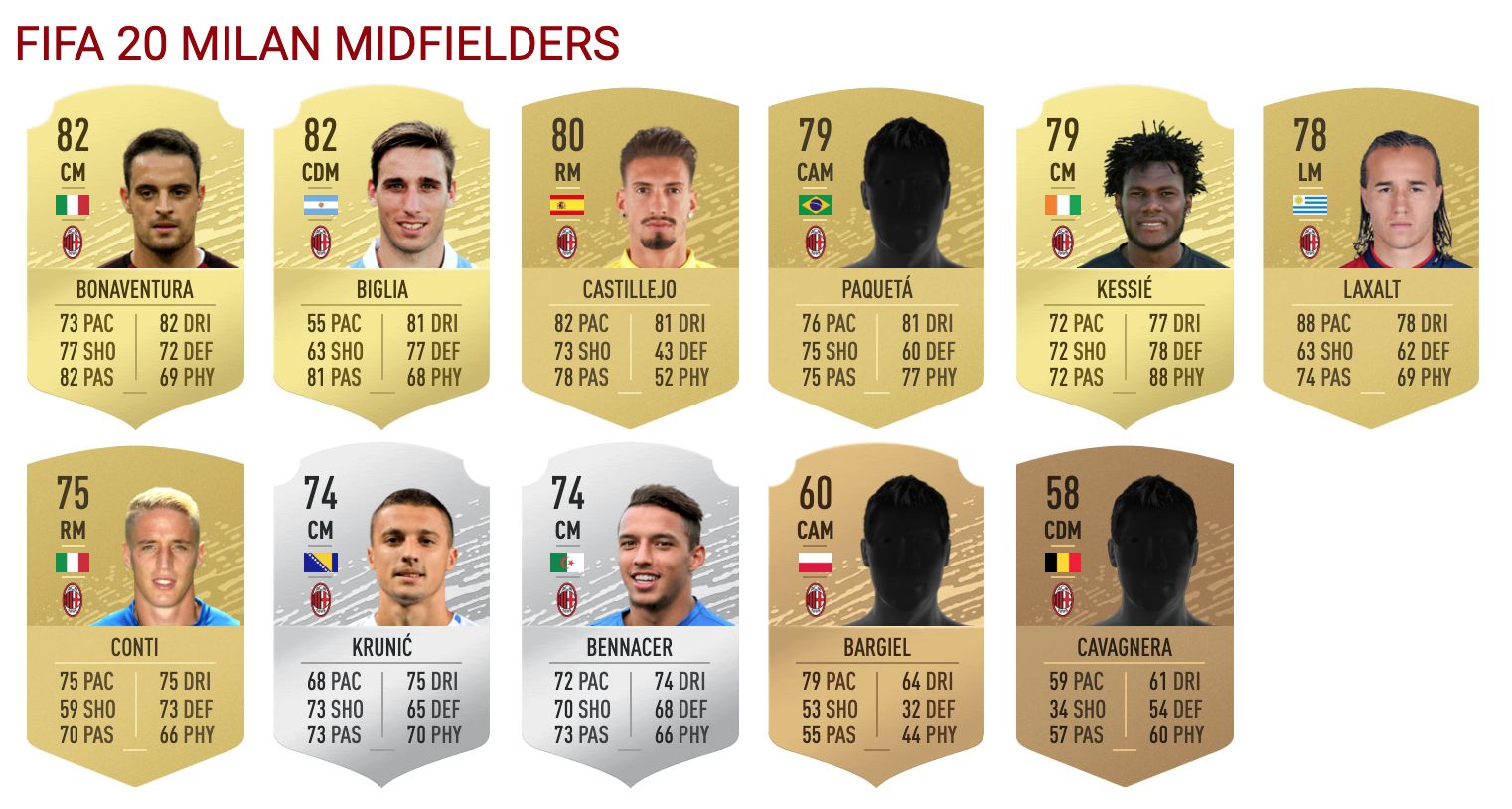 Now we move on to the business end of the field, where €28m summer signing Rafael Leao kicks us off with a 75 overall rating having been a 72 in FIFA 19. The Portugal U21 international is listed as a striker.

Fabio Borini is next up and is once again down as a left winger; the utility man has also maintained his overall of 76.

Hakan Calhanoglu is also down as a left winger and is once again an 80 overall, with new signing Ante Rebic (ST) receiving the same rating – an upgrade of one on the 79 the Croatian got last year.

January signing Krzysztof Piatek comes in at an 80, having started FIFA 19 as a 70 for Genoa before receiving a winter boost to 76.

To cap off the list, Suso is a right winger once against and has maintained his rating of 82 from last year. 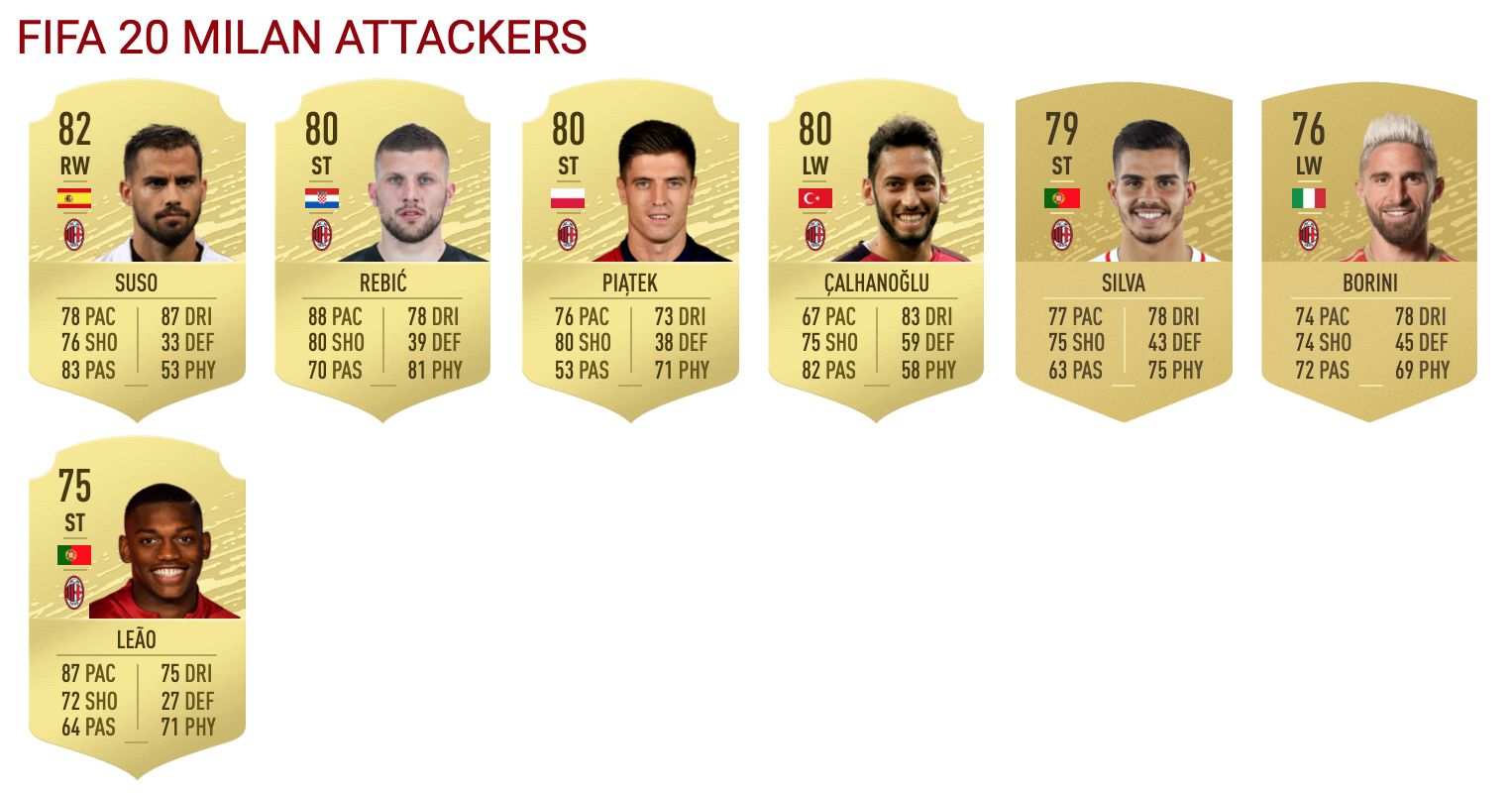