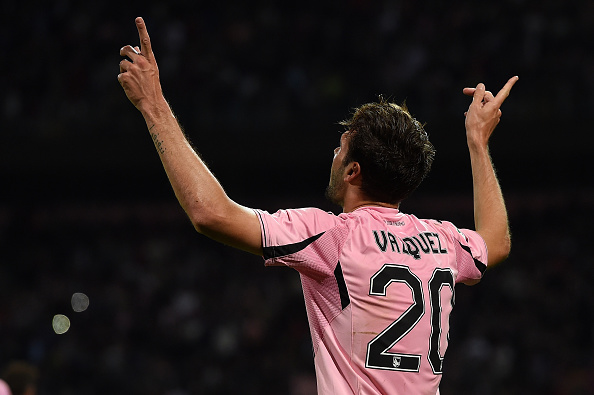 With three goals in the last five games of the season, Franco Vazquez has played a vital role in helping Palermo’s survival this season and president Maurizio Zamparini is already dreaming of a registering another record capital gain as he acquired El Mudo for only € 4.5 million in 2012.

AC Milan are the most interested Serie A club in signing the 27-year-old offensive midfielder who, according to British media, is also a target of Tottenham. Silvio Berlusconi is a long time admirer of the player and Vazquez is considered the perfect man to cover the offensive midfielder role, where both Bonaventura and Honda have failed to impress this season.

Zamparini has slapped a € 25 million price-tag on his star player and the rossoneri are obviously unable to meet the rosanero president’s request, though they still want to negotiate the player’s transfer.

AC Milan are the most plausible solution for the player’s future because it is difficult to imagine El Mudo performing at very high level in a very physical league like the English one. Vazquez played amazingly in the 2014-15 campaign, when Paulo Dybala was also at Palermo, but doubts have been rising over his consistency this term.

Eight goals and six assists are a good score but don’t say enough about the player’s volatility during some games of the season. Vazquez has showed a tendency to disappear from matches and singing him would force the club to build a new dynamic midfield around him, with players capable of collecting and passing the ball in front of them very quickly.

With the San Siro outfit in desperate need of hiring many new players to give the team a fresh start, is Franco Vazquez what the rossoneri really need to turn their fortune around?